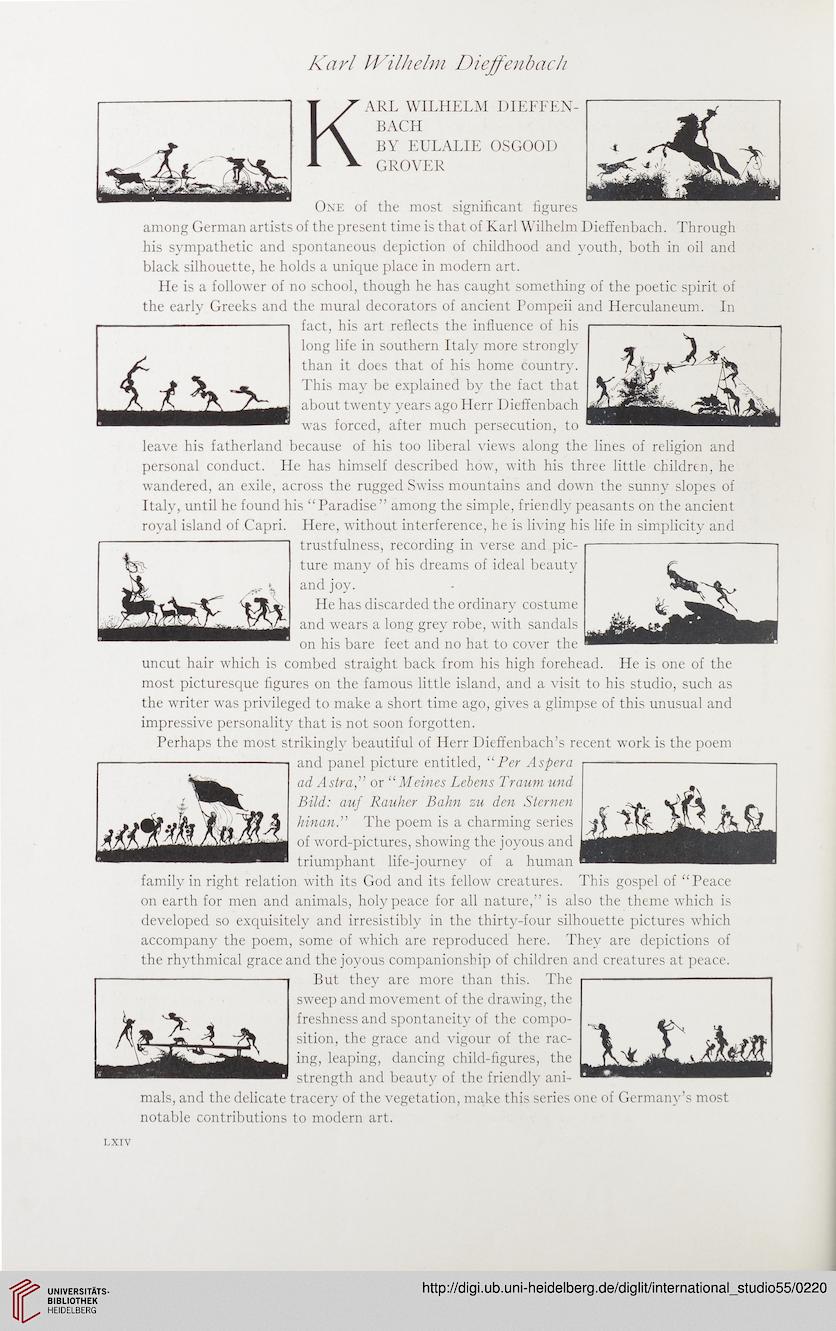 One of the most significant figures
among German artists of the present time is that of Karl Wilhelm Dieffenbach. Through
his sympathetic and spontaneous depiction of childhood and youth, both in oil and
black silhouette, he holds a unique place in modern art.
He is a follower of no school, though he has caught something of the poetic spirit of
the early Greeks and the mural decorators of ancient Pompeii and Herculaneum. In
fact, his art reflects the influence of his
long life in southern Italy more strongly
than it does that of his home country.
This may be explained by the fact that
about twenty years ago Herr Dieffenbach
was forced, after much persecution, to
leave his fatherland because of his too liberal views along the lines of religion and
personal conduct. He has himself described how, with his three little children, he
wandered, an exile, across the rugged Swiss mountains and down the sunny slopes of
Italy, until he found his “Paradise” among the simple, friendly peasants on the ancient
royal island of Capri. Here, without interference, he is living his life in simplicity and
trustfulness, recording in verse and pic¬
ture many of his dreams of ideal beauty
and joy.
He has discarded the ordinary costume
and wears a long grey robe, with sandals
on his bare feet and no hat to cover the
uncut hair which is combed straight back from his high forehead. He is one of the
most picturesque figures on the famous little island, and a visit to his studio, such as
the writer was privileged to make a short time ago, gives a glimpse of this unusual and
impressive personality that is not soon forgotten.
Perhaps the most strikingly beautiful of Herr Dieffenbach’s recent work is the poem
and panel picture entitled, “ Per Aspera
ad Astra” or “ Meines Lebens Traum und
Bild: auf Ranker Bahn zu den Sternen
hinan.” The poem is a charming series
of word-pictures, showing the joyous and
triumphant life-journey of a human
family in right relation with its God and its fellow creatures. This gospel of “Peace
on earth for men and animals, holy peace for all nature,” is also the theme which is
developed so exquisitely and irresistibly in the thirty-four silhouette pictures which
accompany the poem, some of which are reproduced here. They are depictions of
the rhythmical grace and the joyous companionship of children and creatures at peace.
But they are more than this. The
sweep and movement of the drawing, the
freshness and spontaneity of the compo¬
sition, the grace and vigour of the rac¬
ing, leaping, dancing child-figures, the
strength and beauty of the friendly ani-
mals, and the delicate tracery of the vegetation, make this series one of Germany’s most
notable contributions to modern art.