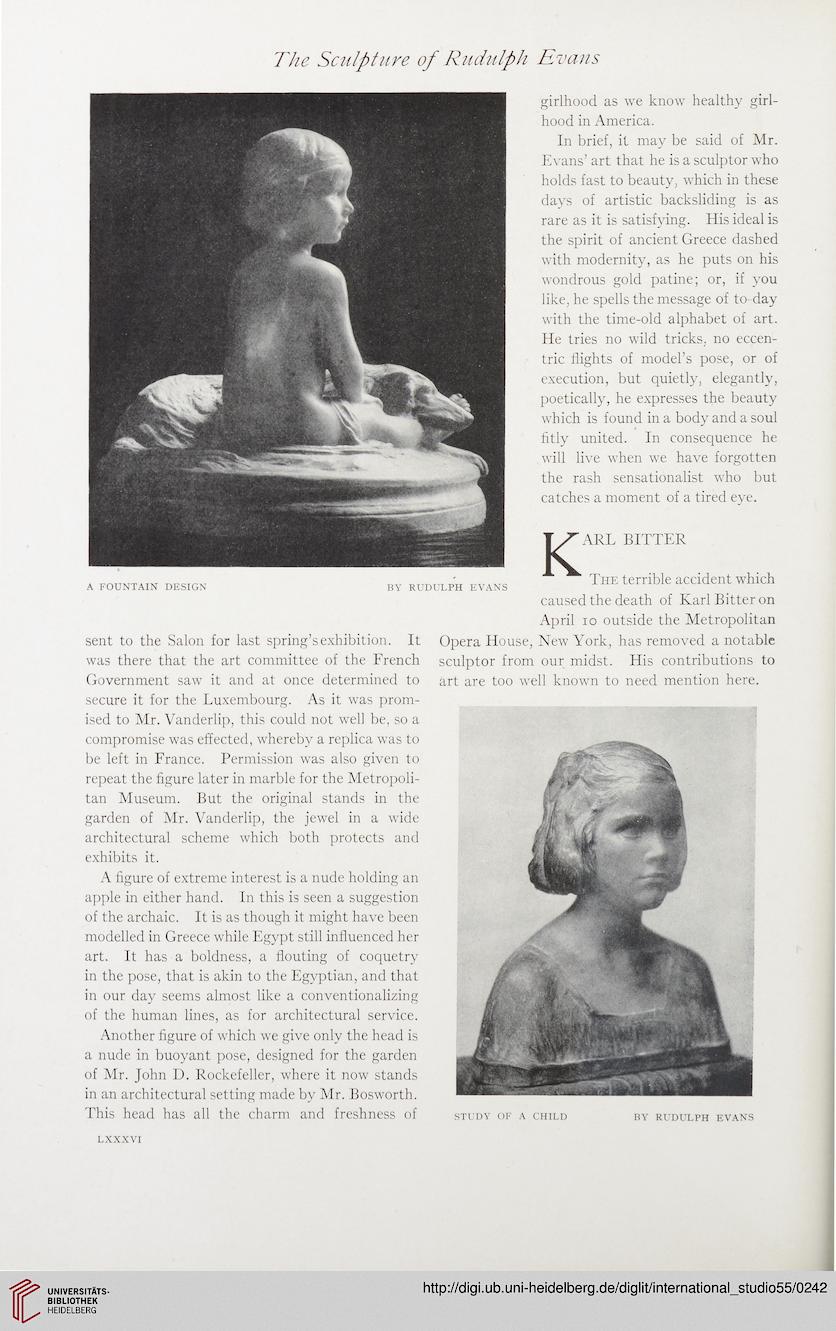 Information about OCR text
The Sculpture of Rudulph Evans

A FOUNTAIN DESIGN BY RUDULPH EVANS


girlhood as we know healthy girl-
hood in America.
In brief, it may be said of Mr.
Evans’ art that he is a sculptor who
holds fast to beauty, which in these
days of artistic backsliding is as
rare as it is satisfying. His ideal is
the spirit of ancient Greece dashed
with modernity, as he puts on his
wondrous gold patine; or, if you
like, he spells the message of to-day
with the time-old alphabet of art.
He tries no wild tricks, no eccen-
tric flights of model’s pose, or of
execution, but quietly, elegantly,
poetically, he expresses the beauty
which is found in a body and a soul
fitly united. In consequence he
will live when we have forgotten
the rash sensationalist who but
catches a moment of a tired eye.
ARL BITTER
The terrible accident which
caused the death of Karl Bitter on


sent to the Salon for last spring’s exhibition. It
was there that the art committee of the French
Government saw it and at once determined to
secure it for the Luxembourg. As it was prom-
ised to Mr. Vanderlip, this could not well be, so a
compromise was effected, whereby a replica was to
be left in France. Permission was also given to
repeat the figure later in marble for the Metropoli-
tan Museum. But the original stands in the
garden of Mr. Vanderlip, the jewel in a wide
architectural scheme which both protects and
exhibits it.
A figure of extreme interest is a nude holding an
apple in either hand. In this is seen a suggestion
of the archaic. It is as though it might have been
modelled in Greece while Egypt still influenced her
art. It has a boldness, a flouting of coquetry
in the pose, that is akin to the Egyptian, and that
in our day seems almost like a conventionalizing
of the human lines, as for architectural service.
Another figure of which we give only the head is
a nude in buoyant pose, designed for the garden
of Mr. John D. Rockefeller, where it now stands
in an architectural setting made by Mr. Bosworth.
This head has all the charm and freshness of

April io outside the Metropolitan
Opera House, New York, has removed a notable
sculptor from our midst. His contributions to
art are too well known to need mention here.

STUDY OF A CHILD BY RUDULPH EVANS