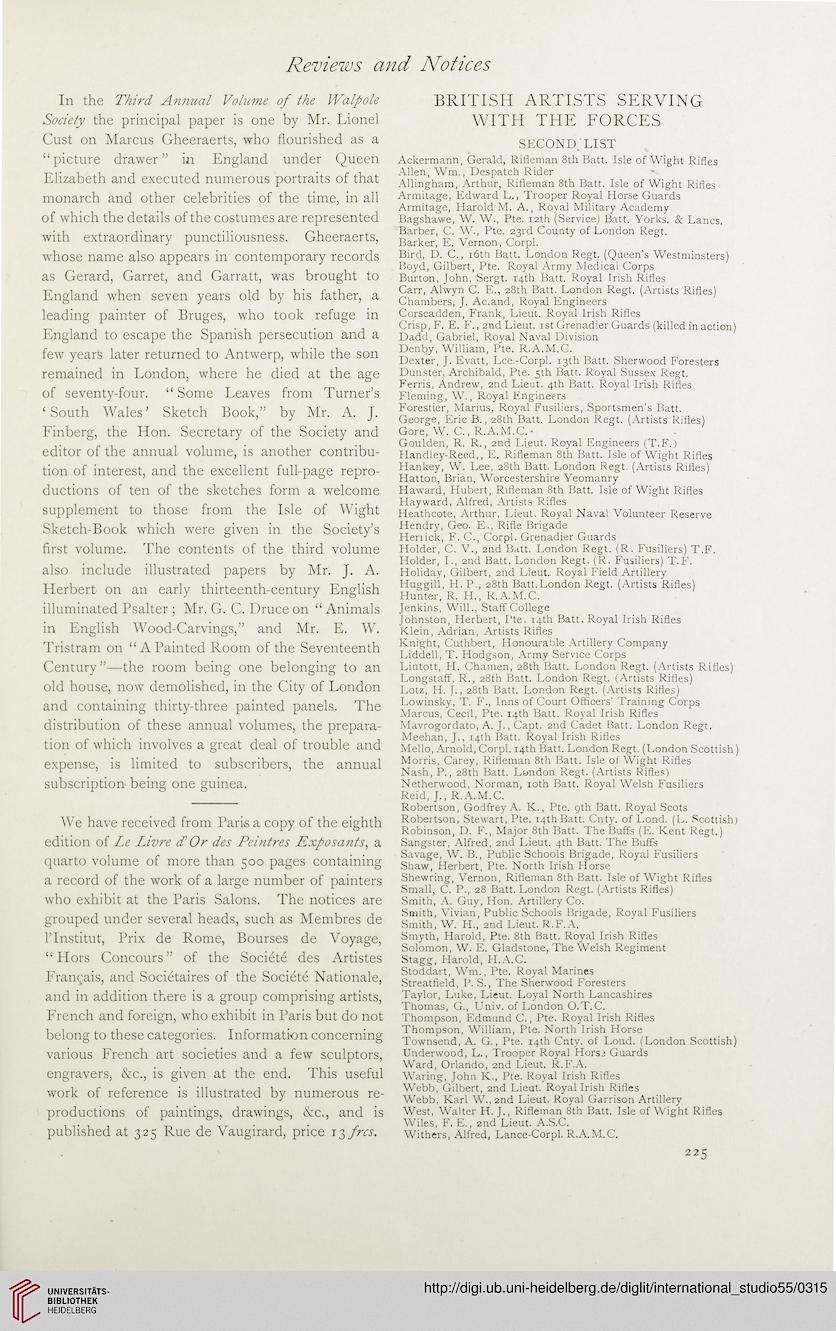 In the Third Annual Volume of the Walpole
Society the principal paper is one by Mr. Lionel
Cust on Marcus Gheeraerts, who flourished as a
“picture drawer” in England under Queen
Elizabeth and executed numerous portraits of that
monarch and other celebrities of the time, in all
of which the details of the costumes are represented
with extraordinary punctiliousness. Gheeraerts,
whose name also appears in contemporary records
as Gerard, Garret, and Garratt, was brought to
England when seven years old by his father, a
leading painter of Bruges, who took refuge in
England to escape the Spanish persecution and a
few years later returned to Antwerp, while the son
remained in London, where he died at the age
of seventy-four. “ Some Leaves from Turner’s
‘South Wales’ Sketch Book,” by Mr. A. J.
Finberg, the Hon. Secretary of the Society and
editor of the annual volume, is another contribu-
tion of interest, and the excellent full-page repro-
ductions of ten of the sketches form a welcome
supplement to those from the Isle of Wight
Sketch-Book which were given in the Society’s
first volume. The contents of the third volume
also include illustrated papers by Mr. J. A.
Herbert on an early thirteenth-century English
illuminated Psalter; Mr. G. C. Druce on “ Animals
in English Wood-Carvings,” and Mr. E. W.
Tristram on “A Painted Room of the Seventeenth
Century”—the room being one belonging to an
old house, now demolished, in the City of London
and containing thirty-three painted panels. The
distribution of these annual volumes, the prepara-
tion of which involves a great deal of trouble and
expense, is limited to subscribers, the annual
subscription being one guinea.
We have received from Paris a copy of the eighth
edition of Le Livre di Or des Peintres Exposants, a
quarto volume of more than 500 pages containing
a record of the work of a large number of painters
who exhibit at the Paris Salons. The notices are
grouped under several heads, such as Membres de
l’lnstitut, Prix de Rome, Bourses de Voyage,
“Hors Concours” of the Societe des Artistes
Frangais, and Societaires of the Societe Nationale,
and in addition there is a group comprising artists,
French and foreign, who exhibit in Paris but do not
belong to these categories. Information concerning
various French art societies and a few sculptors,
engravers, &c., is given at the end. This useful
work of reference is illustrated by numerous re-
productions of paintings, drawings, &c., and is
published at 325 Rue de Vaugirard, price i2>frcs'