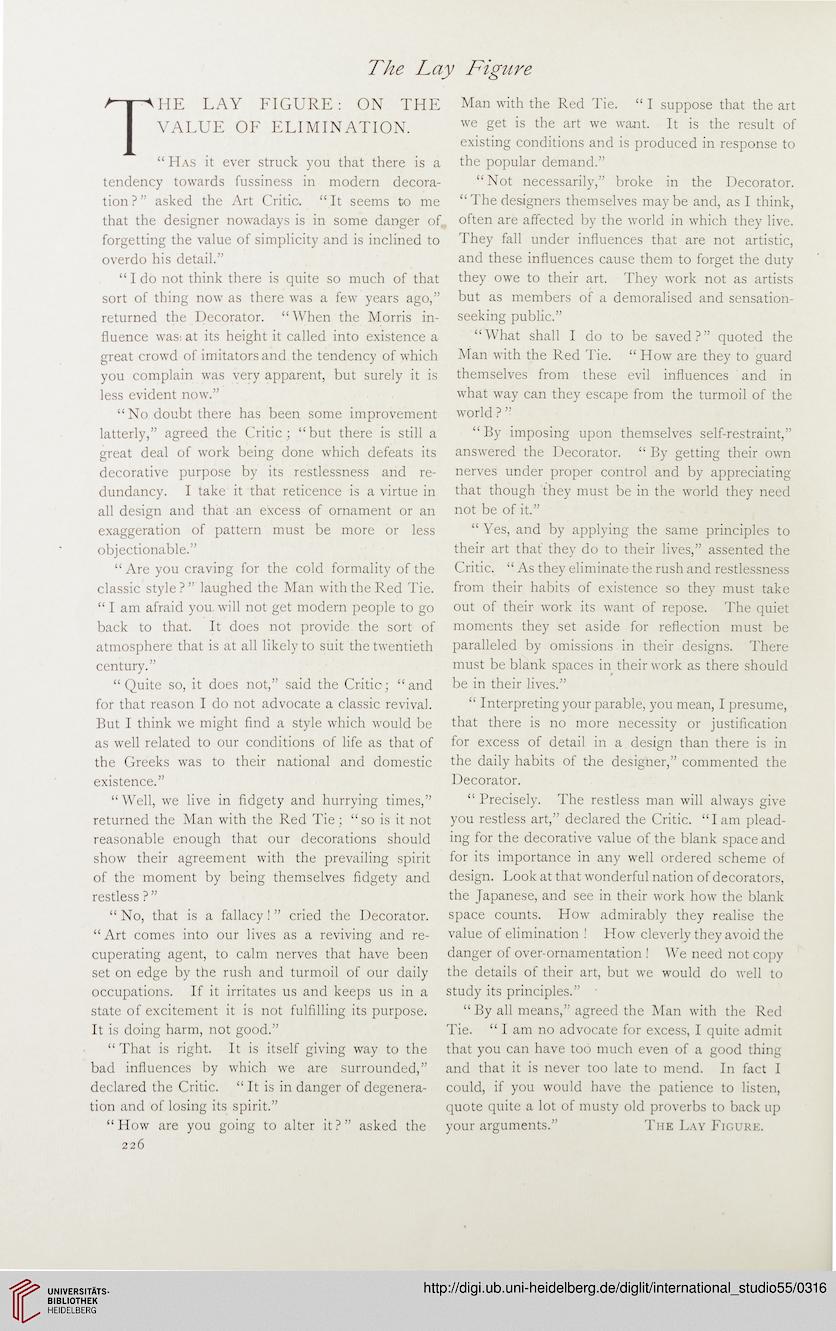 THE LAY FIGURE: ON THE
VALUE OF ELIMINATION.
“ Has it ever struck you that there is a
tendency towards fussiness in modern decora-
tion ? ” asked the Art Critic. “ It seems to me
that the designer nowadays is in some danger of
forgetting the value of simplicity and is inclined to
overdo his detail.”
“ I do not think there is quite so much of that
sort of thing now as there was a few years ago,”
returned the Decorator. “When the Morris in-
fluence was: at its height it called into existence a
great crowd of imitatorsand the tendency of which
you complain was very apparent, but surely it is
less evident now.”
“ No doubt there has been some improvement
latterly,” agreed the Critic; “but there is still a
great deal of work being done which defeats its
decorative purpose by its restlessness and re-
dundancy. I take it that reticence is a virtue in
all design and that an excess of ornament or an
exaggeration of pattern must be more or less
objectionable.”
“ Are you craving for the cold formality of the
classic style?” laughed the Man with the Red Tie.
“ I am afraid you. will not get modern people to go
back to that. It does not provide the sort of
atmosphere that is at all likely to suit the twentieth
century.”
“Quite so, it does not,” said the Critic; “and
for that reason I do not advocate a classic revival.
But I think we might find a style which would be
as well related to our conditions of life as that of
the Greeks was to their national and domestic
existence.”
“ Well, we live in fidgety and hurrying times,”
returned the Man with the Red Tie; “so is it not
reasonable enough that our decorations should
show their agreement with the prevailing spirit
of the moment by being themselves fidgety and
restless ? ”
“ No, that is a fallacy! ” cried the Decorator.
“ Art comes into our lives as a reviving and re-
cuperating agent, to calm nerves that have been
set on edge by the rush and turmoil of our daily
occupations. If it irritates us and keeps us in a
state of excitement it is not fulfilling its purpose.
It is doing harm, not good.”
“That is right. It is itself giving way to the
bad influences by which we are surrounded,”
declared the Critic. “ It is in danger of degenera-
tion and of losing its spirit.”
“ How are you going to alter it ? ” asked the
226

Man with the Red Tie. “ I suppose that the art
we get is the art we want. It is the result of
existing conditions and is produced in response to
the popular demand.”
“Not necessarily,” broke in the Decorator.
“The designers themselves maybe and, as I think,
often are affected by the world in which they live.
They fall under influences that are not artistic,
and these influences cause them to forget the duty
they owe to their art. They work not as artists
but as members of a demoralised and sensation-
seeking public.”
“What shall I do to be saved?” quoted the
Man with the Red Tie. “ How are they to guard
themselves from these evil influences and in
what way can they escape from the turmoil of the
world ? ”
“ By imposing upon themselves self-restraint,”
answered the Decorator. “ By getting their own
nerves under proper control and by appreciating
that though they must be in the world they need
not be of it.”
“ Yes, and by applying the same principles to
their art that they do to their lives,” assented the
Critic. “ As they eliminate the rush and restlessness
from their habits of existence so they must take
out of their work its want of repose. The quiet
moments they set aside for reflection must be
paralleled by omissions in their designs. There
must be blank spaces in their work as there should
be in their lives.”
“ Interpreting your parable, you mean, I presume,
that there is no more necessity or justification
for excess of detail in a design than there is in
the daily habits of the designer,” commented the
Decorator.
“ Precisely. The restless man will always give
you restless art,” declared the Critic. “Iam plead-
ing for the decorative value of the blank space and
for its importance in any well ordered scheme of
design. Look at that wonderful nation of decorators,
the Japanese, and see in their work how the blank
space counts. How admirably they realise the
value of elimination ! How cleverly they avoid the
danger of over-ornamentation ! We need not copy
the details of their art, but we would do well to
study its principles.” •
“ By all means,” agreed the Man with the Red
Tie. “ I am no advocate for excess, I quite admit
that you can have too much even of a good thing
and that it is never too late to mend. In fact I
could, if you would have the patience to listen,
quote quite a lot of musty old proverbs to back up
your arguments.” The Lay Figure.