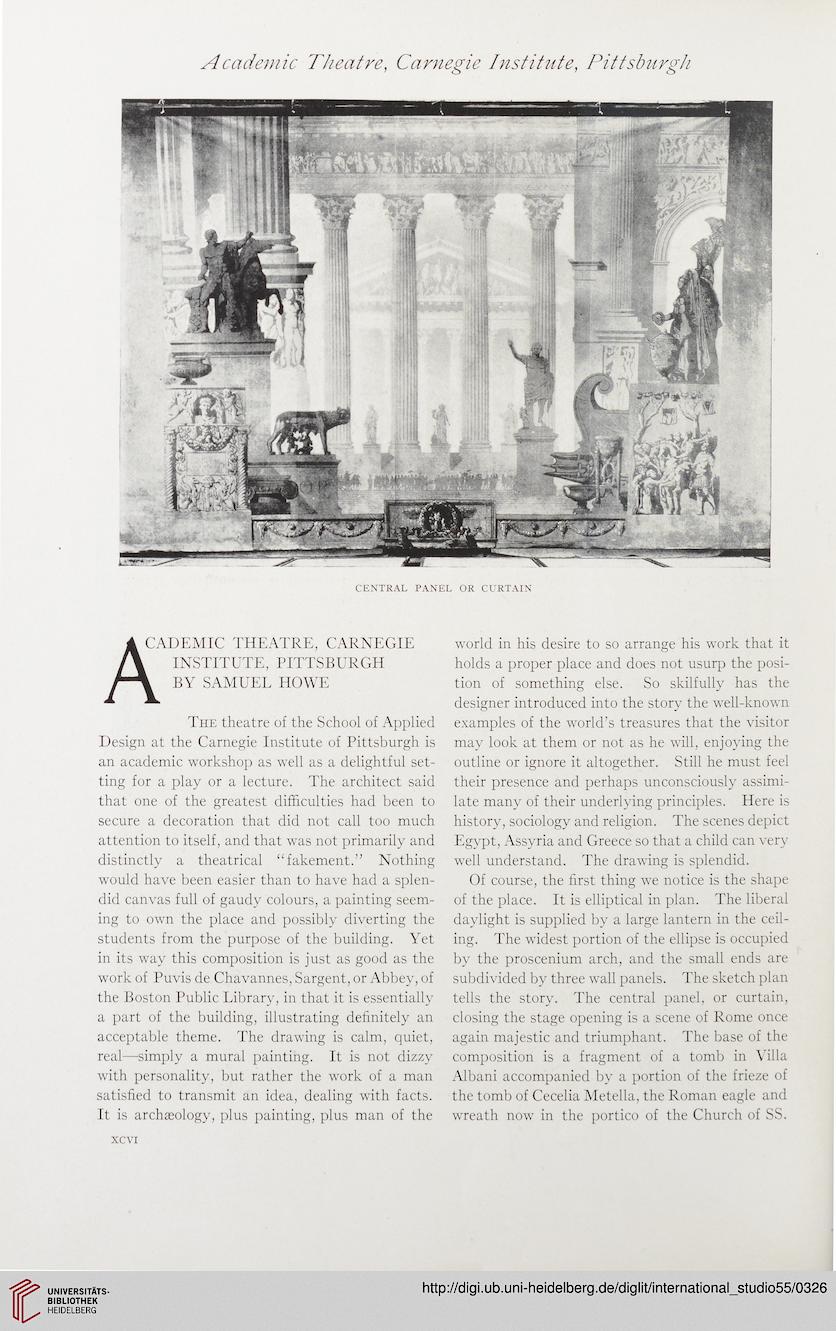 < CADEMIC THEATRE, CARNEGIE
/\ INSTITUTE, PITTSBURGH
AA BY SAMUEL HOWE
The theatre of the School of Applied
Design at the Carnegie Institute of Pittsburgh is
an academic workshop as well as a delightful set-
ting for a play or a lecture. The architect said
that one of the greatest difficulties had been to
secure a decoration that did not call too much
attention to itself, and that was not primarily and
distinctly a theatrical “fakement.” Nothing
would have been easier than to have had a splen-
did canvas full of gaudy colours, a painting seem-
ing to own the place and possibly diverting the
students from the purpose of the building. Yet
in its way this composition is just as good as the
work of Puvis de Chavannes, Sargent, or Abbey, of
the Boston Public Library, in that it is essentially
a part of the building, illustrating definitely an
acceptable theme. The drawing is calm, quiet,
real—simply a mural painting. It is not dizzy
with personality, but rather the work of a man
satisfied to transmit an idea, dealing with facts.
It is archaeology, plus painting, plus man of the

world in his desire to so arrange his work that it
holds a proper place and does not usurp the posi-
tion of something else. So skilfully has the
designer introduced into the story the well-known
examples of the world’s treasures that the visitor
may look at them or not as he will, enjoying the
outline or ignore it altogether. Still he must feel
their presence and perhaps unconsciously assimi-
late many of their underlying principles. Here is
history, sociology and religion. The scenes depict
Egypt, Assyria and Greece so that a child can very
well understand. The drawing is splendid.
Of course, the first thing we notice is the shape
of the place. It is elliptical in plan. The liberal
daylight is supplied by a large lantern in the ceil-
ing. The widest portion of the ellipse is occupied
by the proscenium arch, and the small ends are
subdivided by three wall panels. The sketch plan
tells the story. The central panel, or curtain,
closing the stage opening is a scene of Rome once
again majestic and triumphant. The base of the
composition is a fragment of a tomb in Villa
Albani accompanied by a portion of the frieze of
the tomb of Cecelia Metella, the Roman eagle and
wreath now in the portico of the Church of SS.