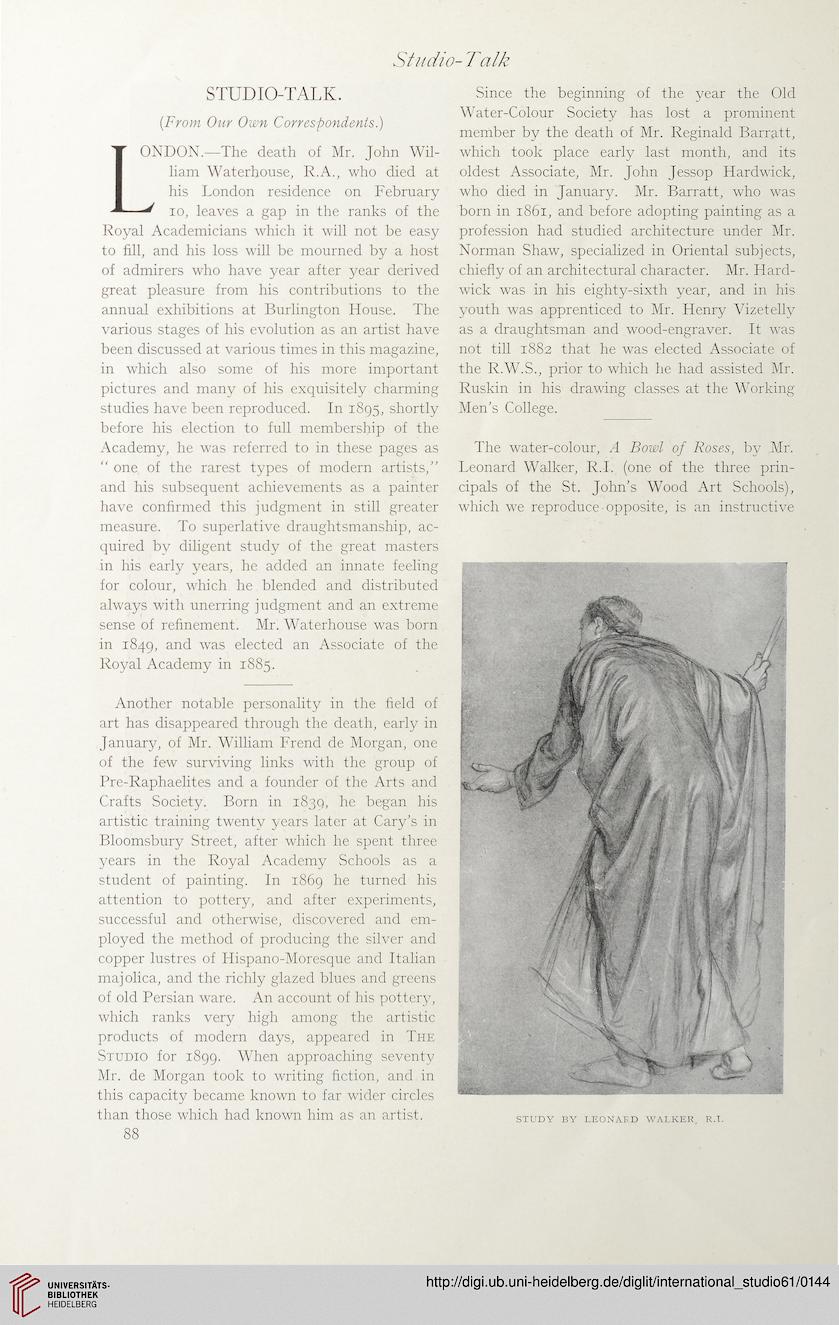 STUDIO-TALK.
{From Our Own Correspondents.')
LONDON.—The death of Mr. John Wil-
liam Waterhouse, R.A., who died at
his London residence on February
io, leaves a gap in the ranks of the
Royal Academicians which it will not be easy
to fill, and his loss will be mourned by a host
of admirers who have year after year derived
great pleasure from his contributions to the
annual exhibitions at Burlington House. The
various stages of his evolution as an artist have
been discussed at various times in this magazine,
in which also some of his more important
pictures and many of his exquisitely charming
studies have been reproduced. In 1895, shortly
before his election to full membership of the
Academy, he was referred to in these pages as
“ one of the rarest types of modern artists,”
and his subsequent achievements as a painter
have confirmed this judgment in still greater
measure. To superlative draughtsmanship, ac-
quired by diligent study of the great masters
in his early years, he added an innate feeling
for colour, which he blended and distributed
always with unerring judgment and an extreme
sense of refinement. Mr. Waterhouse was born
in 1849, and was elected an Associate of the
Royal Academy in 1885.
Another notable personality in the field of
art has disappeared through the death, early in
January, of Mr. William Frend de Morgan, one
of the few surviving links with the group of
Pre-Raphaelites and a founder of the Arts and
Crafts Society. Born in 1839, be began his
artistic training twentv years later at Cary’s in
Bloomsbury Street, after which he spent three
years in the Royal Academy Schools as a
student of painting. In 1869 he turned his
attention to pottery, and after experiments,
successful and otherwise, discovered and em-
ployed the method of producing the silver and
copper lustres of Hispano-Moresque and Italian
majolica, and the richly glazed blues and greens
of old Persian ware. An account of his pottery,
which ranks very high among the artistic
products of modern days, appeared in The
Studio for 1899. When approaching seventy
Mr. de Morgan took to writing fiction, and in
this capacity became known to far wider circles
than those which had known him as an artist.

Since the beginning of the year the Old
Water-Colour Society has lost a prominent
member by the death of Mr. Reginald Barratt,
which took place early last month, and its
oldest Associate, Mr. John Jessop Hardwick,
who died in January. Mr. Barratt, who was
born in 1861, and before adopting painting as a
profession had studied architecture under Mr.
Norman Shaw, specialized in Oriental subjects,
chiefly of an architectural character. Mr. Hard-
wick was in his eighty-sixth year, and in his
youth was apprenticed to Mr. Henry Vizetelly
as a draughtsman and wood-engraver. It was
not till 1882 that he was elected Associate of
the R.W.S., prior to which he had assisted Mr.
Ruskin in his drawing classes at the Working
Men’s College.
The water-colour, A Bowl of Roses, by Mr.
Leonard Walker, R.I. (one of the three prin-
cipals of the St. John’s Wood Art Schools),
which we reproduce opposite, is an instructive