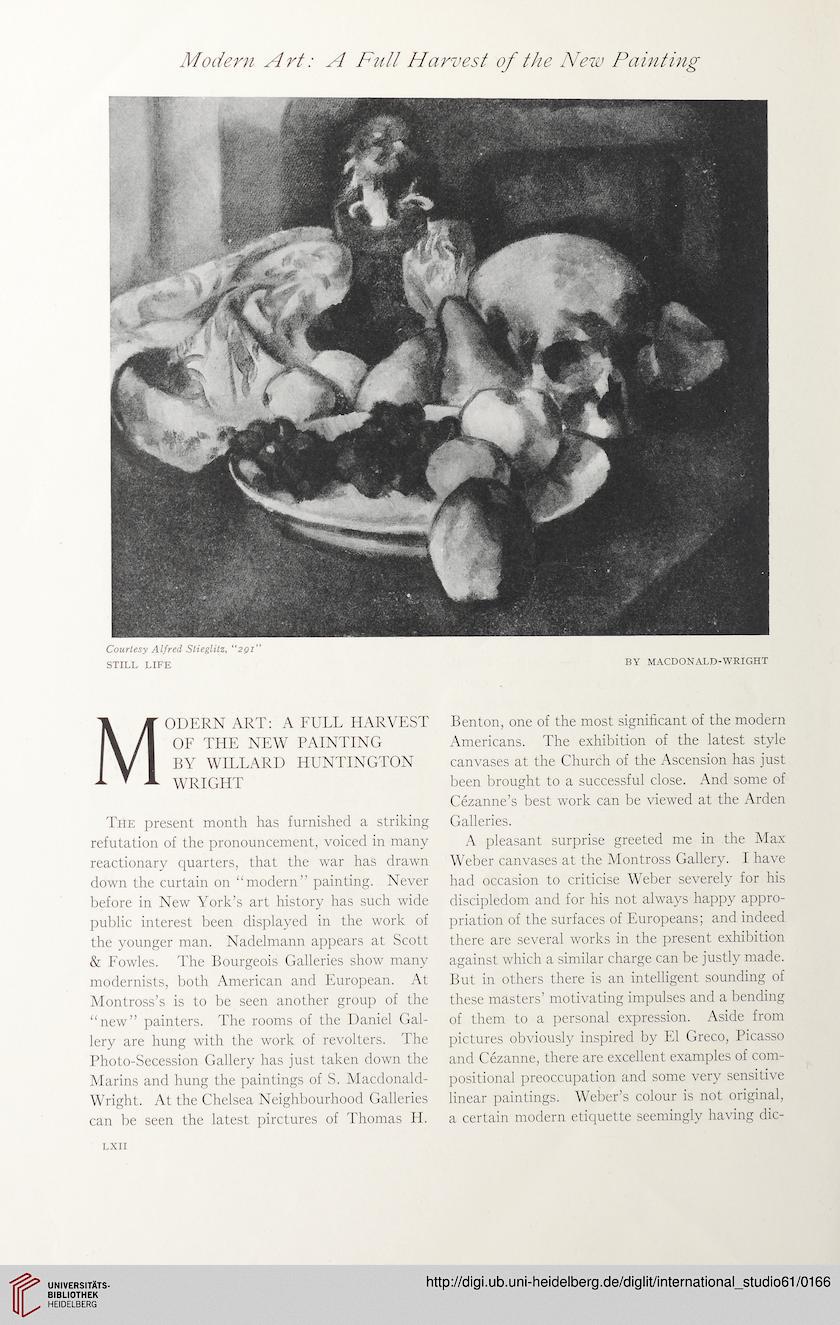 Information about OCR text
Modern Art: A Full Harvest of the New Painting


Modern art: a full harvest
OF THE NEW PAINTING
BY WILLARD HUNTINGTON
WRIGHT
The present month has furnished a striking
refutation of the pronouncement, voiced in many
reactionary quarters, that the war has drawn
down the curtain on “modern” painting. Never
before in New York’s art history has such wide
public interest been displayed in the work of
the younger man. Nadelmann appears at Scott
& Fowles. The Bourgeois Galleries show many
modernists, both American and European. At
Montross’s is to be seen another group of the
“new” painters. The rooms of the Daniel Gal-
lery are hung with the work of revolters. The
Photo-Secession Gallery has just taken down the
Marins and hung the paintings of S. Macdonald-
Wright. At the Chelsea Neighbourhood Galleries
can be seen the latest pirctures of Thomas H.

Benton, one of the most significant of the modern
Americans. The exhibition of the latest style
canvases at the Church of the Ascension has just
been brought to a successful close. And some of
Cezanne’s best work can be viewed at the Arden
Galleries.
A pleasant surprise greeted me in the Max
Weber canvases at the Montross Gallery. I have
had occasion to criticise Weber severely for his
discipledom and for his not always happy appro-
priation of the surfaces of Europeans; and indeed
there are several works in the present exhibition
against which a similar charge can be justly made.
But in others there is an intelligent sounding of
these masters’ motivating impulses and a bending
of them to a personal expression. Aside from
pictures obviously inspired by El Greco, Picasso
and Cezanne, there are excellent examples of com-
positional preoccupation and some very sensitive
linear paintings. Weber’s colour is not original,
a certain modern etiquette seemingly having dic-