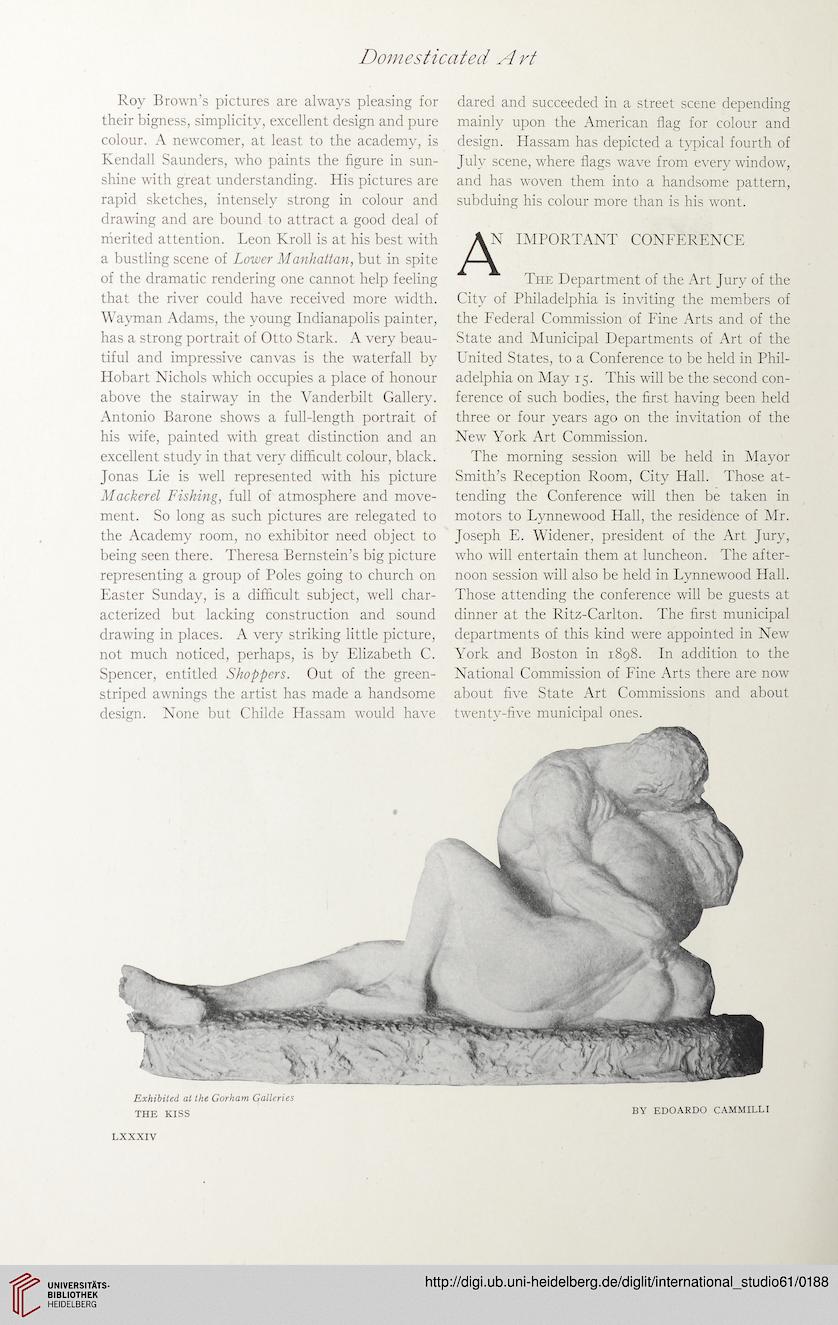 Roy Brown’s pictures are always pleasing for
their bigness, simplicity, excellent design and pure
colour. A newcomer, at least to the academy, is
Kendall Saunders, who paints the figure in sun-
shine with great understanding. His pictures are
rapid sketches, intensely strong in colour and
drawing and are bound to attract a good deal of
merited attention. Leon Kroll is at his best with
a bustling scene of Lower Manhattan, but in spite
of the dramatic rendering one cannot help feeling
that the river could have received more width.
Wayman Adams, the young Indianapolis painter,
has a strong portrait of Otto Stark. A very beau-
tiful and impressive canvas is the waterfall by
Hobart Nichols which occupies a place of honour
above the stairway in the Vanderbilt Gallery.
Antonio Barone shows a full-length portrait of
his wife, painted with great distinction and an
excellent study in that very difficult colour, black.
Jonas Lie is well represented with his picture
Mackerel Fishing, full of atmosphere and move-
ment. So long as such pictures are relegated to
the Academy room, no exhibitor need object to
being seen there. Theresa Bernstein’s big picture
representing a group of Poles going to church on
Easter Sunday, is a difficult subject, well char-
acterized but lacking construction and sound
drawing in places. A very striking little picture,
not much noticed, perhaps, is by Elizabeth C.
Spencer, entitled Shoppers. Out of the green-
striped awnings the artist has made a handsome
design. None but Childe Hassam would have

Exhibited at the Gorham Galleries
THE KISS

dared and succeeded in a street scene depending
mainly upon the American flag for colour and
design. Hassam has depicted a typical fourth of
July scene, where flags wave from every window,
and has woven them into a handsome pattern,
subduing his colour more than is his wont.
y^N IMPORTANT CONFERENCE
The Department of the Art Jury of the
City of Philadelphia is inviting the members of
the Federal Commission of Fine Arts and of the
State and Municipal Departments of Art of the
United States, to a Conference to be held in Phil-
adelphia on May 15. This will be the second con-
ference of such bodies, the first having been held
three or four years ago on the invitation of the
New York Art Commission.
The morning session will be held in Mayor
Smith’s Reception Room, City Hall. Those at-
tending the Conference will then be taken in
motors to Lynnewood Hall, the residence of Mr.
Joseph E. Widener, president of the Art Jury,
who will entertain them at luncheon. The after-
noon session will also be held in Lynnewood Hall.
Those attending the conference will be guests at
dinner at the Ritz-Carlton. The first municipal
departments of this kind were appointed in New
York and Boston in 1898. In addition to the
National Commission of Fine Arts there are now
about five State Art Commissions and about
twenty-five municipal ones.