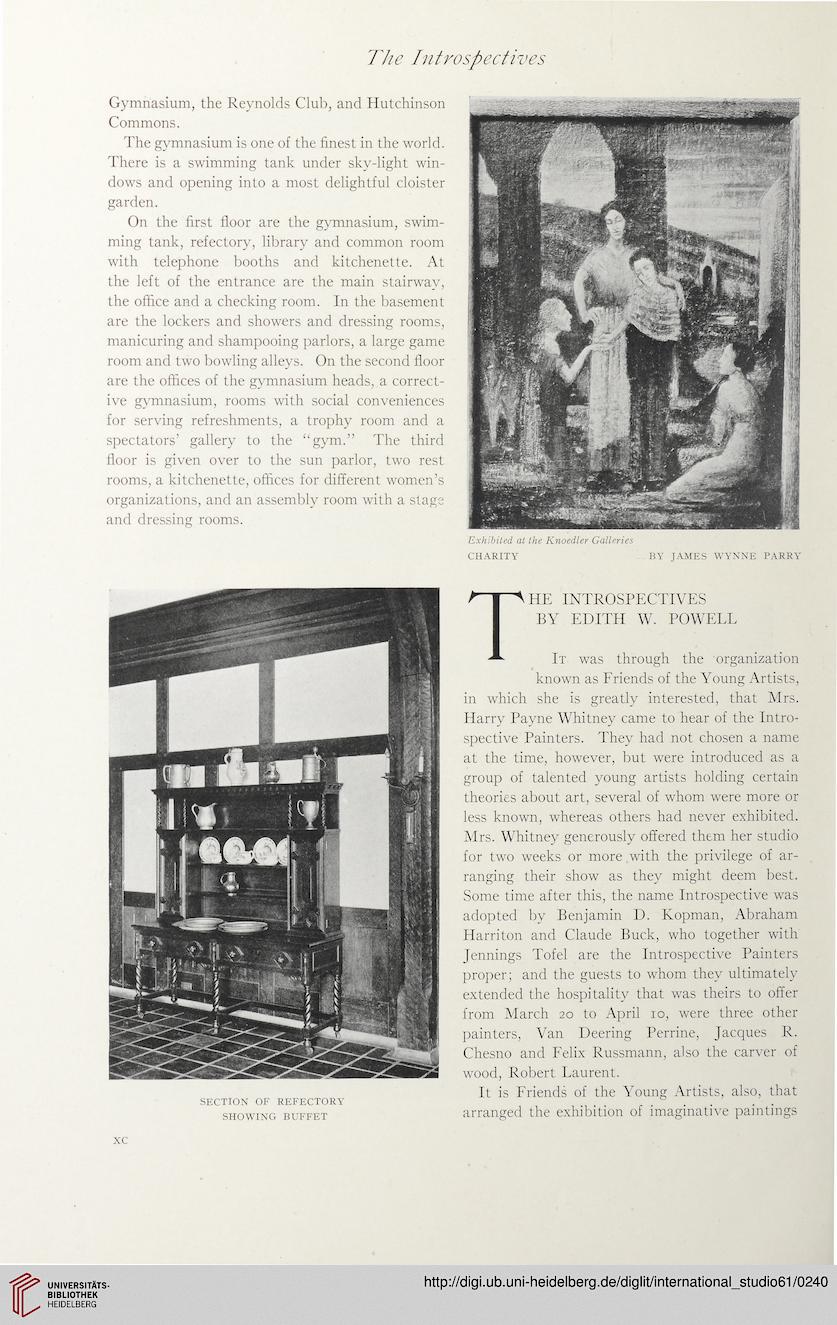 Information about OCR text
The Introspectives

Gymnasium, the Reynolds Club, and Hutchinson
Commons.
The gymnasium is one of the finest in the world.
There is a swimming tank under sky-light win-
dows and opening into a most delightful cloister
garden.
On the first floor are the gymnasium, swim-
ming tank, refectory, library and common room
with telephone booths and kitchenette. At
the left of the entrance are the main stairway,
the office and a checking room. In the basement
are the lockers and showers and dressing rooms,
manicuring and shampooing parlors, a large game
room and two bowling alleys. On the second floor
are the offices of the gymnasium heads, a correct-
ive gymnasium, rooms with social conveniences
for serving refreshments, a trophy room and a
spectators’ gallery to the “gym.” The third
floor is given over to the sun parlor, two rest
rooms, a kitchenette, offices for different women’s
organizations, and an assembly room with a stage
and dressing rooms.

Exhibited at the Knoedler Galleries
CHARITY BY JAMES WYNNE PARRY

A I ^HE INTROSPECTIVES
BY EDITH W. POWELL
It was through the organization
known as Friends of the Young Artists,
in which she is greatly interested, that Mrs.
Harry Payne Whitney came to hear of the Intro-
spective Painters. They had not chosen a name
at the time, however, but were introduced as a
group of talented young artists holding certain
theories about art, several of whom were more or
less known, whereas others had never exhibited.
Airs. Whitney generously offered them her studio
for two weeks or more with the privilege of ar-
ranging their show as they might deem best.
Some time after this, the name Introspective was
adopted by Benjamin D. Kopman, Abraham
Harriton and Claude Buck, who together with
Jennings Tofel are the Introspective Painters
proper; and the guests to whom they ultimately
extended the hospitality that was theirs to offer
from March 20 to April 10, were three other
painters, Van Deering Perrine, Jacques R.
Chesno and Felix Russmann, also the carver of
wood, Robert Laurent.
It is Friends of the Young Artists, also, that
arranged the exhibition of imaginative paintings