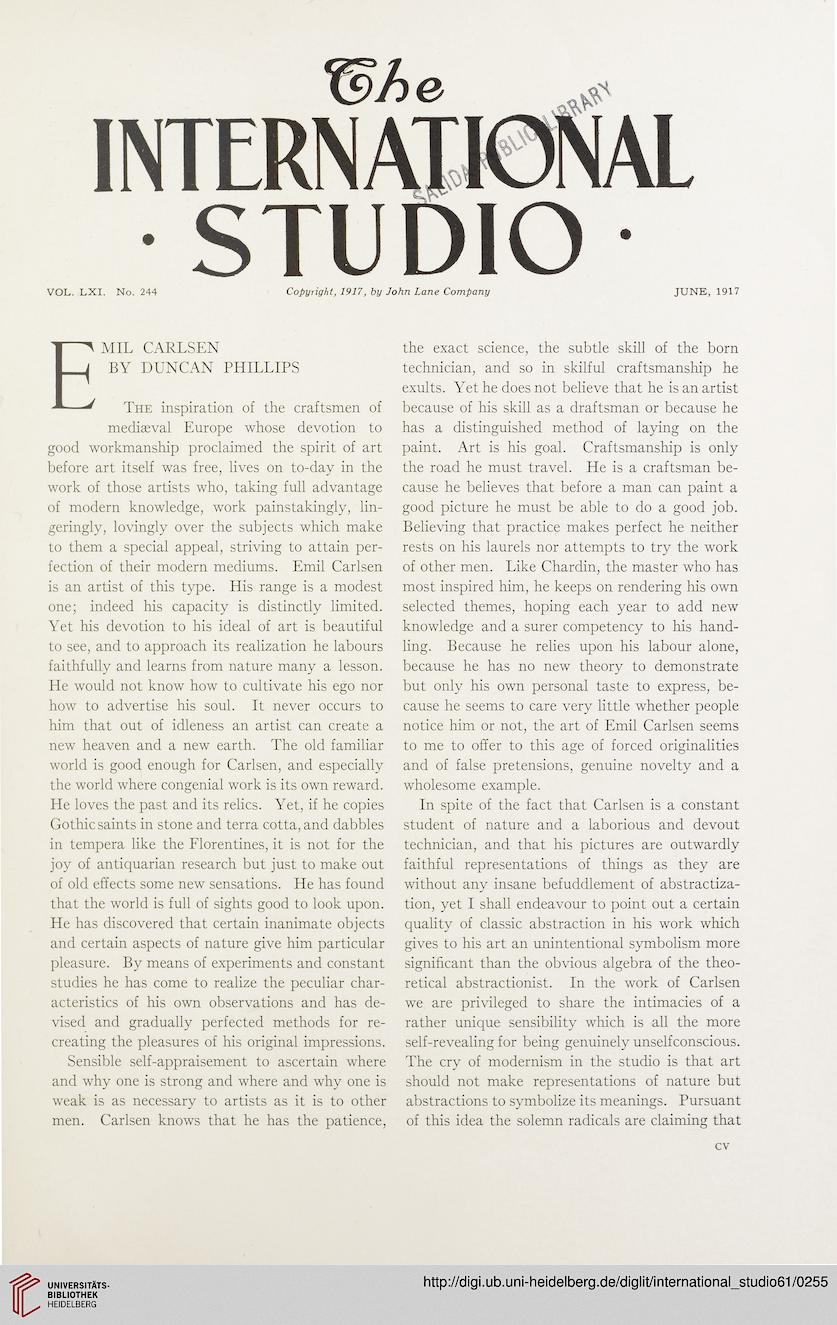 
MIL CARLSEN
BY DUNCAN PHILLIPS
The inspiration of the craftsmen of

mediaeval Europe whose devotion to
good workmanship proclaimed the spirit of art
before art itself was free, lives on to-day in the

work of those artists who, taking full advantage
of modern knowledge, work painstakingly, lin-
geringly, lovingly over the subjects which make
to them a special appeal, striving to attain per-
fection of their modern mediums. Emil Carlsen

is an artist of this type. His range is a modest
one; indeed his capacity is distinctly limited.
Yet his devotion to his ideal of art is beautiful

to see, and to approach its realization he labours
faithfully and learns from nature many a lesson.
He would not know how to cultivate his ego nor
how to advertise his soul. It never occurs to
him that out of idleness an artist can create a
new heaven and a new earth. The old familiar

world is good enough for Carlsen, and especially
the world where congenial work is its own reward.
He loves the past and its relics. Yet, if he copies
Gothic saints in stone and terra cotta, and dabbles
in tempera like the Florentines, it is not for the
joy of antiquarian research but just to make out
of old effects some new sensations. He has found

that the world is full of sights good to look upon.
He has discovered that certain inanimate objects
and certain aspects of nature give him particular
pleasure. By means of experiments and constant
studies he has come to realize the peculiar char-
acteristics of his own observations and has de-

vised and gradually perfected methods for re-
creating the pleasures of his original impressions.
Sensible self-appraisement to ascertain where
and why one is strong and where and why one is
weak is as necessary to artists as it is to other
men. Carlsen knows that he has the patience,

the exact science, the subtle skill of the born
technician, and so in skilful craftsmanship he
exults. Yet he does not believe that he is an artist
because of his skill as a draftsman or because he
has a distinguished method of laying on the
paint. Art is his goal. Craftsmanship is only
the road he must travel. He is a craftsman be-
cause he believes that before a man can paint a
good picture he must be able to do a good job.
Believing that practice makes perfect he neither
rests on his laurels nor attempts to try the work
of other men. Like Chardin, the master who has
most inspired him, he keeps on rendering his own
selected themes, hoping each year to add new
knowledge and a surer competency to his hand-
ling. Because he relies upon his labour alone,
because he has no new theory to demonstrate
but only his own personal taste to express, be-
cause he seems to care very little whether people
notice him or not, the art of Emil Carlsen seems
to me to offer to this age of forced originalities
and of false pretensions, genuine novelty and a
wholesome example.
In spite of the fact that Carlsen is a constant
student of nature and a laborious and devout
technician, and that his pictures are outwardly
faithful representations of things as they are
without any insane befuddlement of abstractiza-
tion, yet I shall endeavour to point out a certain
quality of classic abstraction in his work which
gives to his art an unintentional symbolism more
significant than the obvious algebra of the theo-
retical abstractionist. In the work of Carlsen
we are privileged to share the intimacies of a
rather unique sensibility which is all the more
self-revealing for being genuinely unselfconscious.
The cry of modernism in the studio is that art
should not make representations of nature but
abstractions to symbolize its meanings. Pursuant
of this idea the solemn radicals are claiming that