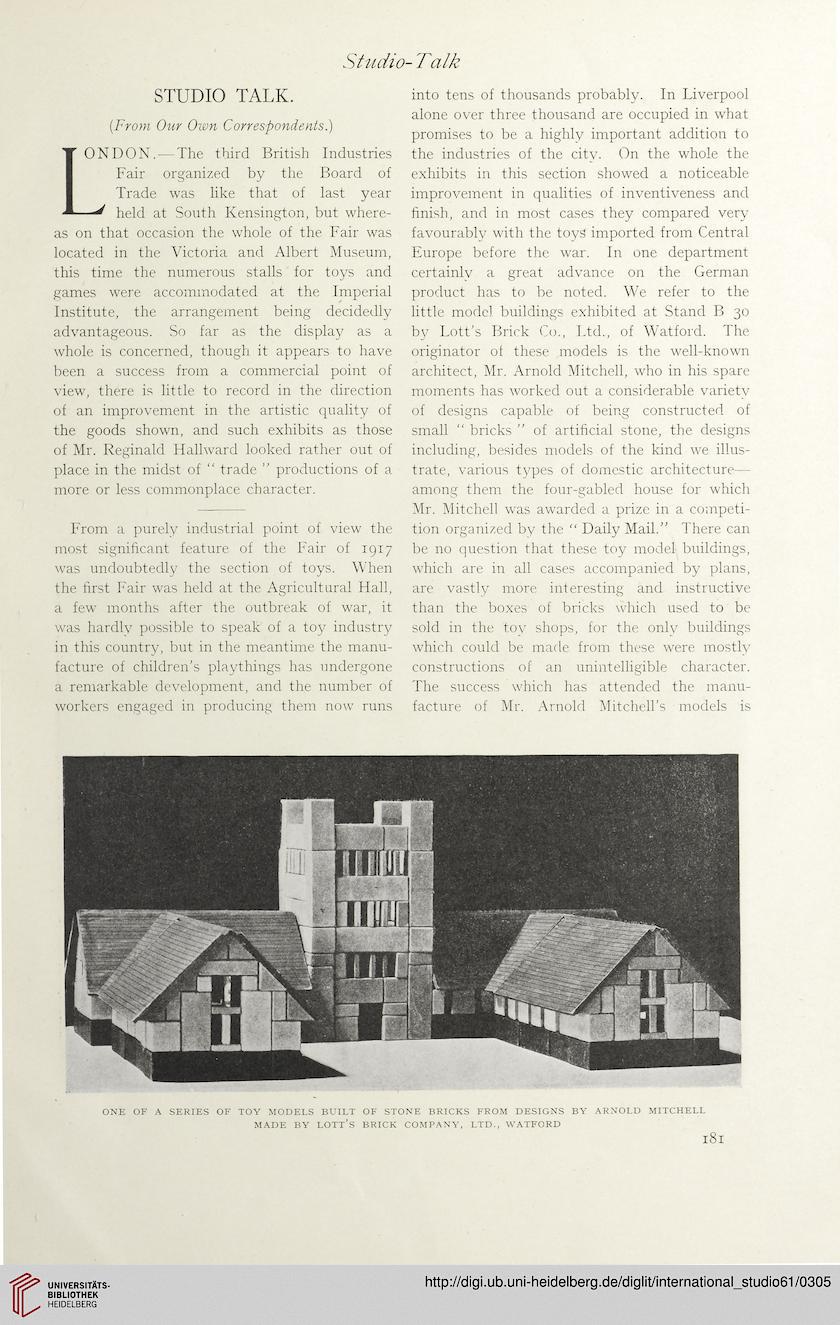 STUDIO TALK.
{From Our Own Correspondents.')
I ON DON.—The third British Industries
Fair organized by the Board of
Trade was like that of last year
—held at South Kensington, but where-
as on that occasion the whole of the Fair was
located in the Victoria and Albert Museum,
this time the numerous stalls for toys and
games were accommodated at the Imperial
Institute, the arrangement being decidedly
advantageous. So far as the display as a
whole is concerned, though it appears to have
been a success from a commercial point of
view, there is little to record in the direction
of an improvement in the artistic quality of
the goods shown, and such exhibits as those
of Mr. Reginald Hallward looked rather out of
place in the midst of “ trade ” productions of a
more or less commonplace character.
From a purely industrial point of view the
most significant feature of the Fair of 1917
was undoubtedly the section of toys. When
the first Fair was held at the Agricultural Hall,
a few months after the outbreak of war, it
was hardly possible to speak of a toy industry
in this country, but in the meantime the manu-
facture of children’s playthings has undergone
a remarkable development, and the number of
workers engaged in producing them now runs

into tens of thousands probably. In Liverpool
alone over three thousand are occupied in what
promises to be a highly important addition to
the industries of the citv. On the whole the
exhibits in this section showed a noticeable
improvement in qualities of inventiveness and
finish, and in most cases they compared very
favourably with the toys imported from Central
Europe before the war. In one department
certainly a great advance on the German
product has to be noted. We refer to the
little model buildings exhibited at Stand B 30
by Lott’s Brick Co., Ltd., of Watford. The
originator of these models is the well-known
architect, Mr. Arnold Mitchell, who in his spare
moments has worked out a considerable variety
of designs capable of being constructed of
small “ bricks ” of artificial stone, the designs
including, besides models of the kind we illus-
trate, various types of domestic architecture—
among them the four-gabled house for which
Mr. Mitchell was awarded a prize in a competi-
tion organized by the " Daily Mail.” There can
be no question that these toy model buildings,
which are in all cases accompanied by plans,
are vastly more interesting and instructive
than the boxes of bricks which used to be
sold in the toy shops, for the only buildings
which could be made from these were mostly
constructions of an unintelligible character.
The success which has attended the manu-
facture of Mr. Arnold Mitchell’s models is