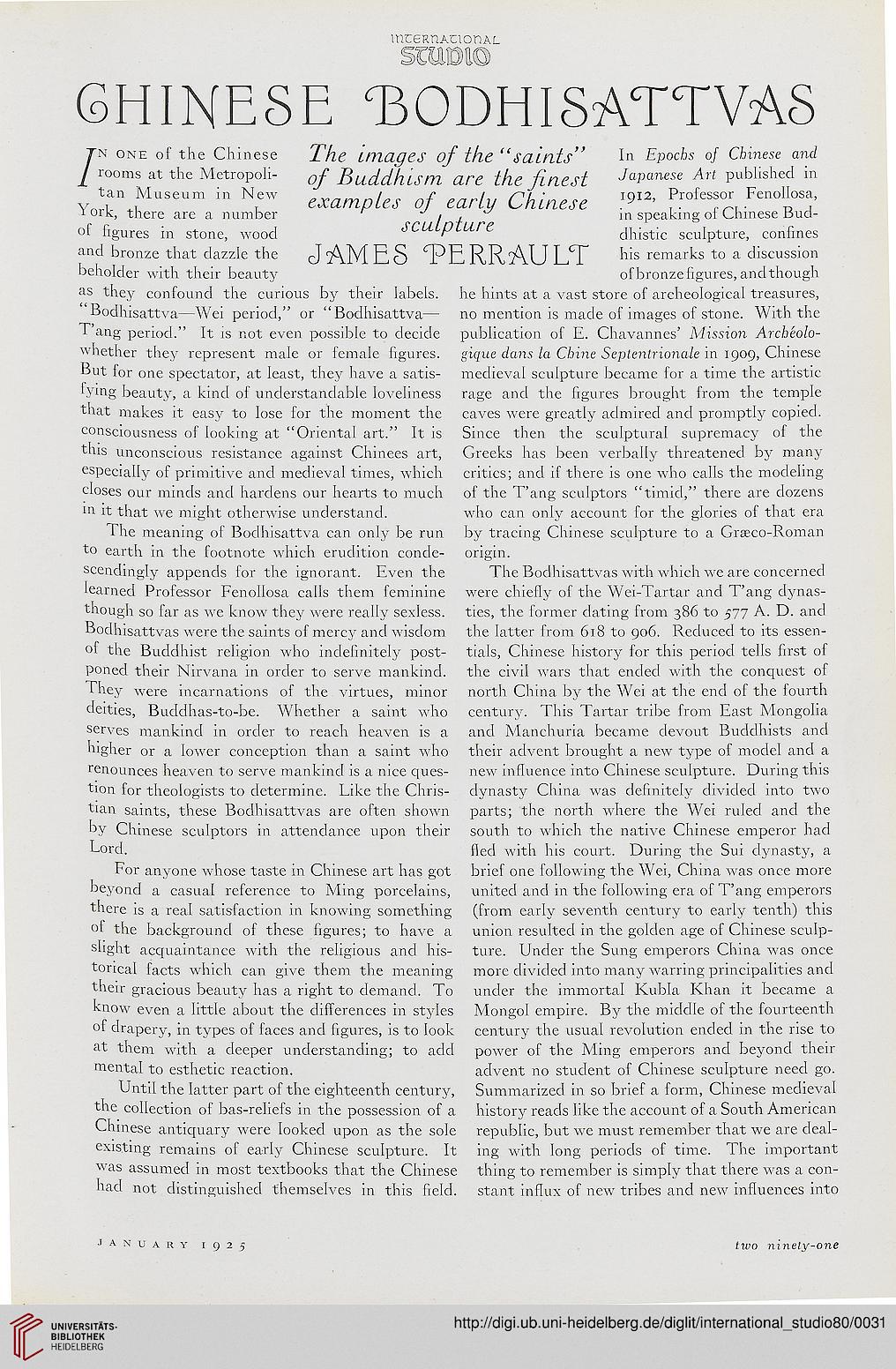 /n one of the Chinese The images of the "saints" In Epochs of Chinese and
rooms at the Metropoli- 0f Buddhism are the finest JaPanese An Published in
tan Museum in New exampLes 0f eady Chinese 1912' f.^fessor FenoIIosa,
1 ork, there are a number ' I 4 m sPeaking of Chinese Bud-

and bronze that dazzle the JAMES T'ERRAULT his remarks to a discussion
beholder with their beauty of bronze figures, and though

as they confound the curious by their labels. he hints at a vast store of archeological treasures,
Bodhisattva—Wei period," or "Bodhisattva— no mention is made of images of stone. With the
T ang period." It is not even possible to decide publication of E. Chavannes' Mission Archeolo-
whether they represent male or female figures. gique dans la Chine Septentrionale in 1909, Chinese
But for one spectator, at least, they have a satis- medieval sculpture became for a time the artistic
lying beauty, a kind of understandable loveliness rage and the figures brought from the temple
that makes it easy to lose for the moment the caves were greatly admired and promptly copied,
consciousness of looking at "Oriental art." It is Since then the sculptural supremacy of the
this unconscious resistance against Chinees art, Greeks has been verbally threatened by many
especially of primitive and medieval times, which critics; and if there is one who calls the modeling
closes our minds and hardens our hearts to much of the T'ang sculptors "timid," there are dozens
m it that we might otherwise understand. who can only account for the glories of that era

The meaning of Bodhisattva can only be run by tracing Chinese sculpture to a Grseco-Roman
to earth in the footnote which erudition conde- origin.

scendingly appends for the ignorant. Even the The Bodhisattvas with which we are concerned

learned Professor FenoIIosa calls them feminine were chiefly of the Wei-Tartar and T'ang dynas-
though so far as we know they were really sexless, ties, the former dating from 386 to 577 A. D. and
Bodhisattvas were the saints of mercy and wisdom the latter from 618 to 906. Reduced to its essen-
°f the Buddhist religion who indefinitely post- tials, Chinese history for this period tells first of
poned their Nirvana in order to serve mankind, the civil wars that ended with the conquest of
They were incarnations of the virtues, minor north China by the Wei at the end of the fourth
deities, Buddhas-to-be. Whether a saint who century. This Tartar tribe from East Mongolia
serves mankind in order to reach heaven is a and Manchuria became devout Buddhists and
higher or a lower conception than a saint who their advent brought a new type of model and a
renounces heaven to serve mankind is a nice ques- new influence into Chinese sculpture. During this
tion for theologists to determine. Like the Chris- dynasty China was definitely divided into two
tian saints, these Bodhisattvas are often shown parts; the north where the Wei ruled and the
by Chinese sculptors in attendance upon their south to which the native Chinese emperor had
Lord. fled with his court. During the Sui dynasty, a

For anyone whose taste in Chinese art has got brief one following the Wei, China was once more
beyond a casual reference to Ming porcelains, united and in the following era of T'ang emperors
there is a real satisfaction in knowing something (from early seventh century to early tenth) this
°f the background of these figures; to have a union resulted in the golden age of Chinese sculp-
slight acquaintance with the religious and his- ture. Under the Sung emperors China was once
toncal facts which can give them the meaning more divided into many warring principalities and
their gracious beauty has a right to demand. To under the immortal Kubla Khan it became a
know even a little about the differences in styles Mongol empire. By the middle of the fourteenth
of drapery, in types of faces and figures, is to look century the usual revolution ended in the rise to
at them with a deeper understanding; to add power of the Ming emperors and beyond their
mental to esthetic reaction. advent no student of Chinese sculpture need go.

Until the latter part of the eighteenth century, Summarized in so brief a form, Chinese medieval
the collection of bas-reliefs in the possession of a history reads like the account of a South American
Chinese antiquary were looked upon as the sole republic, but we must remember that Ave are deal-
existing remains of early Chinese sculpture. It ing with long periods of time. The important
was assumed in most textbooks that the Chinese thing to remember is simply that there was a con-
had not distinguished themselves in this field, stant influx of new tribes and new influences into