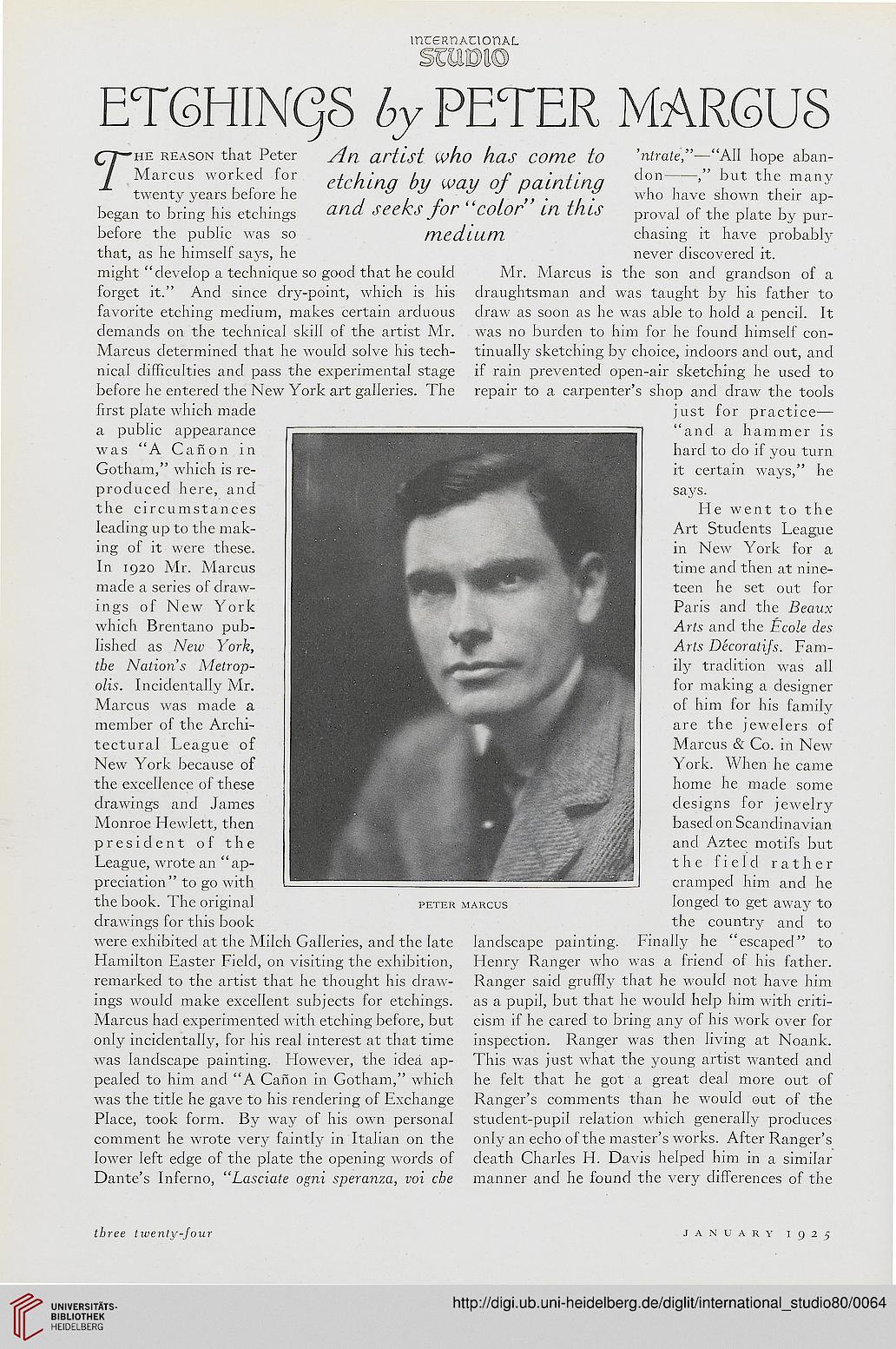 rhe reason that Peter An artist who has Come to 'ntrate,"—"All hope aban-
Marcus worked for ^/ b Qf painting don--," but the many

that, as he himself says, he never discovered it.

might "develop a technique so good that he could Mr. Marcus is the son and grandson of a
forget it." And since dry-point, which is his draughtsman and was taught by his father to
favorite etching medium, makes certain arduous draw as soon as he was able to hold a pencil. It
demands on the technical skill of the artist Mr. was no burden to him for he found himself con-
Marcus determined that he would solve his tech- tinually sketching by choice, indoors and out, and
nical difficulties and pass the experimental stage if rain prevented open-air sketching he used to
before he entered the New York art galleries. The repair to a carpenter's shop and draw the tools
first plate which made just for practice—

a public appearance
was "A Canon in
Gotham," which is re-
produced here, and
the circumstances
leading up to the mak-
ing of it were these.
In 1920 Mr. Marcus
made a series of draw-
ings of New York
which Brentano pub-
lished as New York,
the Nation's Metrop-
olis. Incidentally Mr.
Marcus was made a
member of the Archi-
tectural League of
New York because of
the excellence of these
drawings and James
Monroe Hewlett, then
president of the
League, wrote an "ap-
preciation" to go with

"and a hammer is
hard to do if you turn
it certain ways," he
says.

Lie went to the
Art Students League
in New York for a
time and then at nine-
teen he set out for
Paris and the Beaux
Arts and the Ecole des
Arts Decoratifs. Fam-
ily tradition was all
for making a designer
of him for his family
are the jewelers of
Marcus & Co. in New
York. When he came
home he made some
designs for jewelry
based on Scandinavian
and Aztec motifs but
the field rather
cramped him and he

the book. The original peter marcus longed to get away to

drawings for this book the country and to

were exhibited at the Milch Galleries, and the late landscape painting. Finally he "escaped" to

Hamilton Easter Field, on visiting the exhibition, Henry Ranger who was a friend of his father,

ings would make excellent subjects for etchings, as a pupil, but that he would help him with criti-

Marcus had experimented with etching before, but cism if he cared to bring any of his work over for

only incidentally, for his real interest at that time inspection. Ranger was then living at Noank.

was landscape painting. However, the idea ap- This was just what the young artist wanted and

pealed to him and "A Canon in Gotham," which he felt that he got a great deal more out of

Place, took form. By way of his own personal student-pupil relation which generally produces

comment he wrote very faintly in Italian on the only an echo of the master's works. After Ranger's

lower left edge of the plate the opening words of death Charles H. Davis helped him in a similar

Dante's Inferno, "Lasciate ogni speranza, vox che manner and he found the very differences of the