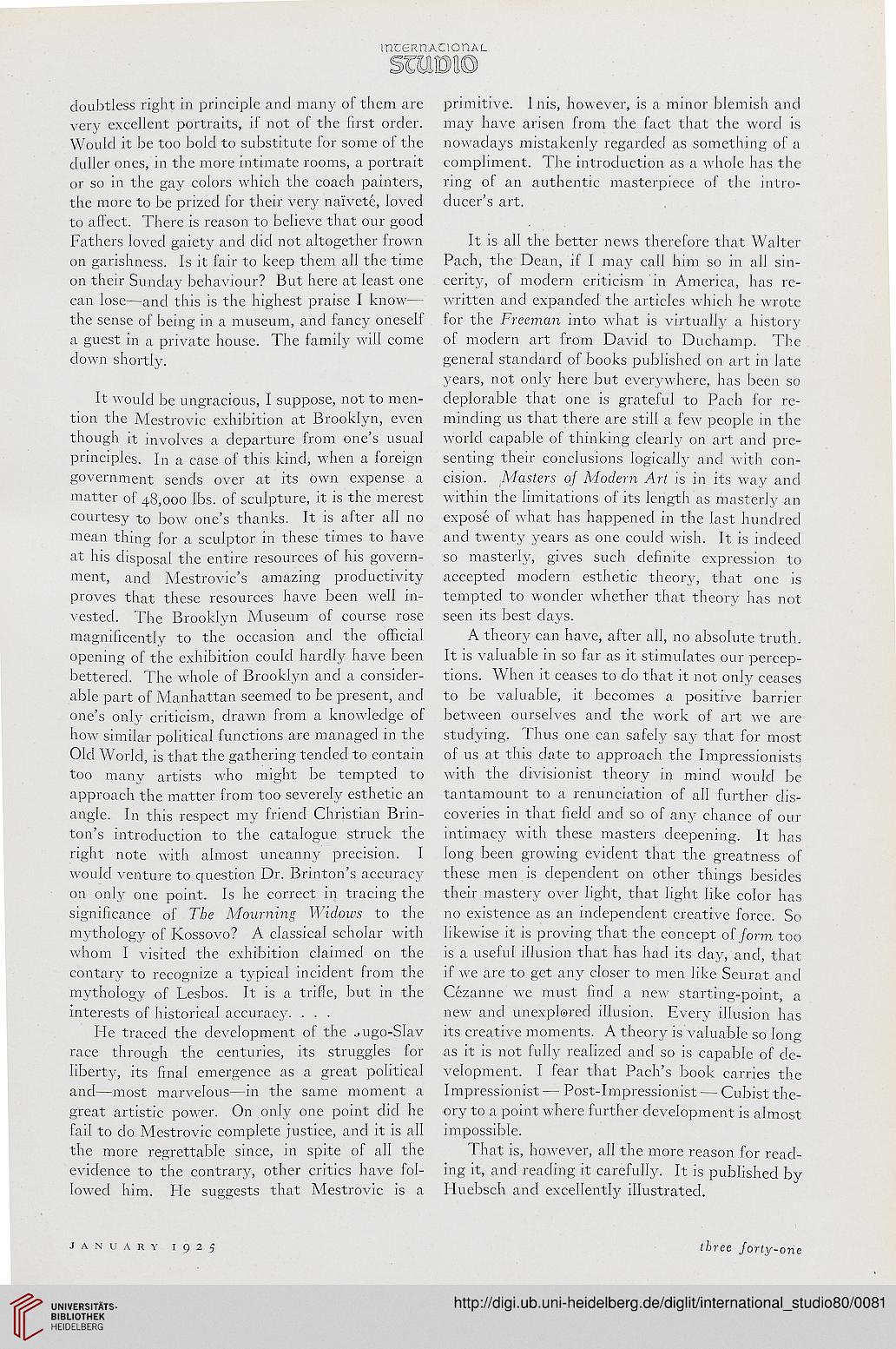 doubtless right in principle and many of them are
very excellent portraits, if not of the first order.
Would it be too bold to substitute for some of the
duller ones, in the more intimate rooms, a portrait
or so in the gay colors which the coach painters,
the more to be prized for their very naivete, loved
to affect. There is reason to believe that our good
Fathers loved gaiety and did not altogether frown
on garishness. Is it fair to keep them all the time
on their Sunday behaviour? But here at least one
can lose—and this is the highest praise I know—
the sense of being in a museum, and fancy oneself
a guest in a private house. The family will come
down shortly.

It would be ungracious, I suppose, not to men-
tion the Mestrovic exhibition at Brooklyn, even
though it involves a departure from one's usual
principles. In a case of this kind, when a foreign
government sends over at its own expense a
matter of 48,000 lbs. of sculpture, it is the merest
courtesy to bow one's thanks. It is after all no
mean thing for a sculptor in these times to have
at his disposal the entire resources of his govern-
ment, and Mestrovic's amazing productivity
proves that these resources have been well in-
vested. The Brooklyn Museum of course rose
magnificently to the occasion and the official
opening of the exhibition could hardly have been
bettered. The whole of Brooklyn and a consider-
able part of Manhattan seemed to be present, and
one's only criticism, drawn from a knowledge of
how similar political functions are managed in the
Old World, is that the gathering tended to contain
too many artists who might be tempted to
approach the matter from too severely esthetic an
angle. In this respect my friend Christian Brin-
ton's introduction to the catalogue struck the
right note with almost uncanny precision. I
would venture to question Dr. Brinton's accuracy
on only one point. Is he correct in tracing the
significance of The Mourning \}Tidoivs to the
mythology of Kossovo? A classical scholar with
whom I visited the exhibition claimed on the
contary to recognize a typical incident from the
mythology of Lesbos. It is a trifle, but in the
interests of historical accuracy. . . .

He traced the development of the ^ugo-SIav
race through the centuries, its struggles for
liberty, its final emergence as a great political
and—most marvelous—in the same moment a
great artistic power. On only one point did he
fail to do Mestrovic complete justice, and it is all
the more regrettable since, in spite of all the
evidence to the contrary, other critics have fol-
lowed him. He suggests that Mestrovic is a

primitive. Inis, however, is a minor blemish and
may have arisen from the fact that the word is
nowadays mistakenly regarded as something of a
compliment. The introduction as a whole has the
ring of an authentic masterpiece of the intro-
ducer's art.

It is all the better news therefore that Walter
Pach, the Dean, if I may call him so in all sin-
cerity, oi modern criticism in America, has re-
written and expanded the articles which he wrote
for the Freeman into what is virtually a history
of modern art from David to Duchamp. The
general standard of books published on art in late
years, not only here but everywhere, has been so
deplorable that one is grateful to Pach for re-
minding us that there are still a few people in the
world capable of thinking clearly on art and pre-
senting their conclusions logically and with con-
cision. Masters of Modern Art is in its way and
within the limitations of its length as masterly an
expose of what has happened in the last hundred
and twenty years as one could wish. It is indeed
so masterly, gives such definite expression to
accepted modern esthetic theory, that one is
tempted to wonder whether that theory has not
seen its best days.

A theory can have, after all, no absolute truth.
It is valuable in so far as it stimulates our percep-
tions. When it ceases to do that it not only ceases
to be valuable, it becomes a positive barrier
between ourselves and the work of art we are
studying. Thus one can safely say that for most
of us at this date to approach the Impressionists
with the divisionist theory in mind would be
tantamount to a renunciation of all further dis-
coveries in that field and so of any chance of our
intimacy with these masters deepening. It has
long been growing evident that the greatness of
these men is dependent on other things besides
their mastery over light, that light like color has
no existence as an independent creative force. So
likewise it is proving that the concept of form too
is a useful illusion that has had its day, and, that
if we are to get any closer to men like Seurat and
Cezanne we must find a new starting-point, a
new and unexplored illusion. Every illusion has
its creative moments. A theory is valuable so long
as it is not fully realized and so is capable of de-
velopment. I fear that Pach's book carries the
Impressionist — Post-Impressionist — Cubist the-
ory to a point where further development is almost
impossible.

That is, however, all the more reason for read-
ing it, and reading it carefully. It is published by
Huebsch and excellently illustrated.