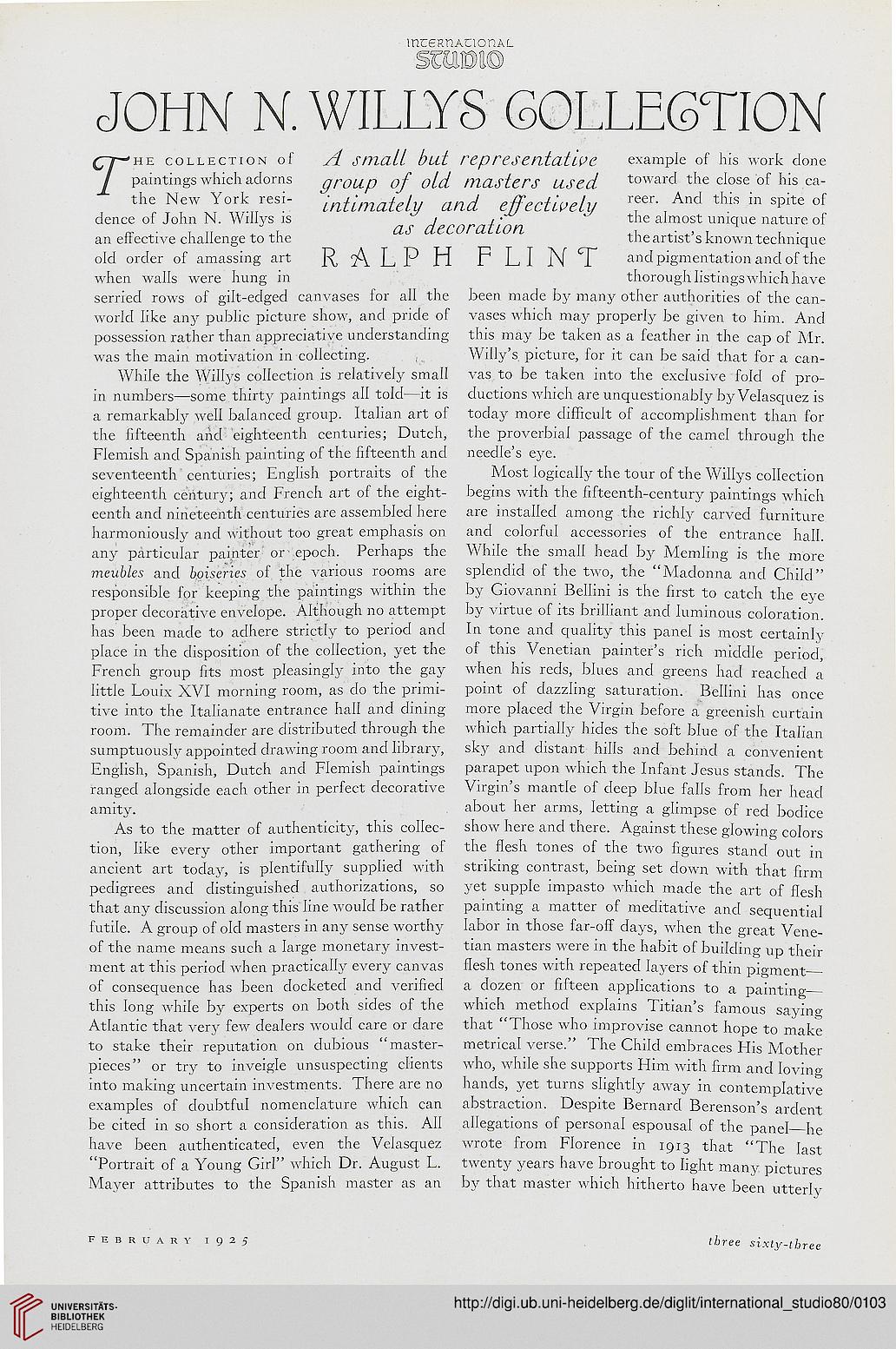 / paintings which adorns
the New York resi-
dence of John N. Willys is
an effective challenge to the
old order of amassing art
when walls were hung in
serried rows of gilt-edged canvases for all the
world like any public picture show, and pride of
possession rather than appreciative understanding
was the main motivation in collecting.

While the Willys collection is relatively small
in numbers—some thirty paintings all told—it is
a remarkably well balanced group. Italian art of
the fifteenth and eighteenth centuries; Dutch,
Flemish and Spanish painting of the fifteenth and
seventeenth centuries; English portraits of the
eighteenth century; and French art of the eight-
eenth and nineteenth centuries are assembled here
harmoniously and without too great emphasis on
any particular painter or epoch. Perhaps the
meiibles and boiseries of the various rooms are
responsible for keeping the paintings within the
proper decorative envelope. Although no attempt
has been made to adhere strictly to period and
place in the disposition of the collection, yet the
French group fits most pleasingly into the gay
little Louix XVI morning room, as do the primi-
tive into the Italianate entrance hall and dining
room. The remainder are distributed through the
sumptuously appointed drawing room and library,
English, Spanish, Dutch and Flemish paintings
ranged alongside each other in perfect decorative
amity.

As to the matter of authenticity, this collec-
tion, like every other important gathering of
ancient art today, is plentifully supplied with
pedigrees and distinguished authorizations, so
that any discussion along this line would be rather
futile. A group of old masters in any sense worthy
of the name means such a large monetary invest-
ment at this period when practically every canvas
of consequence has been docketed and verified
this long while by experts on both sides of the
Atlantic that very few dealers would care or dare
to stake their reputation on dubious "master-
pieces" or try to inveigle unsuspecting clients
into making uncertain investments. There are no
examples of doubtful nomenclature which can
be cited in so short a consideration as this. All
have been authenticated, even the Velasquez
"Portrait of a Young Girl" which Dr. August L.
Mayer attributes to the Spanish master as an

example of his work done
toward the close of his ca-
reer. And this in spite of
the almost unique nature of
the artist's known technique
and pigmentation and of the
thorough Iistingswhich have
been made by many other authorities of the can-
vases which may properly be given to him. And
this may be taken as a feather in the cap of Mr.
Willy's picture, for it can be said that for a can-
vas to be taken into the exclusive fold of pro-
ductions which are unquestionably by Velasquez is
today more difficult of accomplishment than for
the proverbial passage of the camel through the
needle's eye.

Most logically the tour of the Willys collection
begins with the fifteenth-century paintings which
are installed among the richly carved furniture
and colorful accessories of the entrance hall.
While the small head by Mcmling is the more
splendid of the two, the "Madonna and Child"
by Giovanni Bellini is the first to catch the eye
by virtue of its brilliant and luminous coloration.
In tone and quality this panel is most certainly
of this Venetian painter's rich middle period,
when his reds, blues and greens had reached a
point of dazzling saturation. Bellini has once
more placed the Virgin before a greenish curtain
which partially hides the soft blue of the Italian
sky and distant hills and behind a convenient
parapet upon which the Infant Jesus stands. The
Virgin's mantle of deep blue falls from her head
about her arms, letting a glimpse of red bodice
show here and there. Against these glowing colors
the flesh tones of the two figures stand out in
striking contrast, being set down with that firm
yet supple impasto which made the art of flesh
painting a matter of meditative and sequential
labor in those far-off days, when the great Vene-
tian masters were in the habit of building up their
flesh tones with repeated layers of thin pigment—
a dozen or fifteen applications to a painting—
which method explains Titian's famous saying
that "Those who improvise cannot hope to make
metrical verse." The Child embraces His Mother
who, while she supports Him with firm and loving
hands, yet turns slightly away in contemplative
abstraction. Despite Bernard Berenson's ardent
allegations of personal espousal of the panel—he
wrote from Florence in 1913 that "The last
twenty years have brought to light many pictures
by that master which hitherto have been utterly