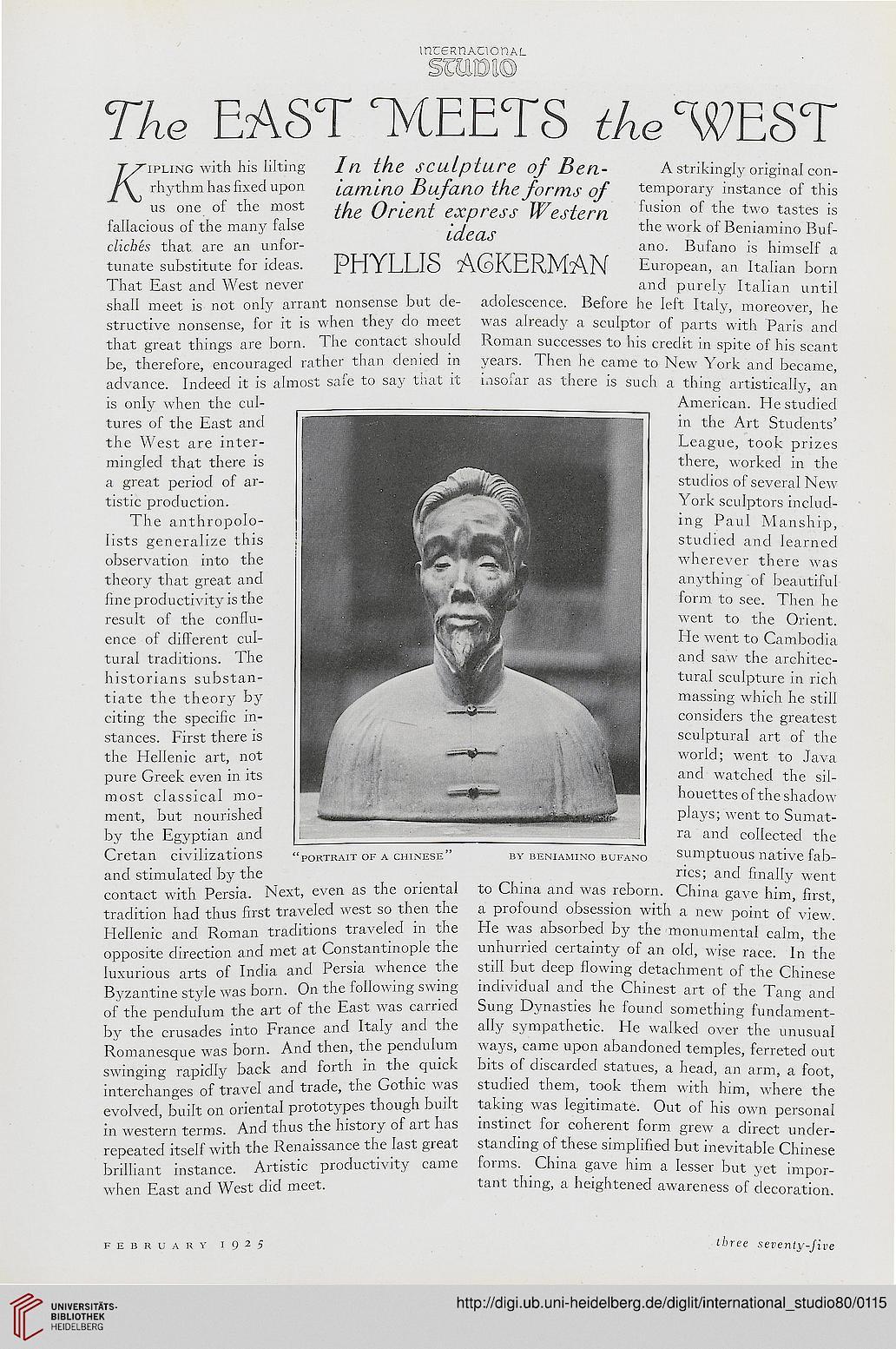 The EAST "MEETS the ^EST

clicbes that are an unfor- ano. Bufano is himself a

tunate substitute for ideas. PHYLLIS A6KERMAN European, an Italian born
That East and West never and purely Italian until

shall meet is not only arrant nonsense but de- adolescence. Before lie left Italy, moreover, he
structive nonsense, for it is when they do meet was already a sculptor of parts with Paris and
that great things are born. The contact should Roman successes to his credit in spite of his scant
be, therefore, encouraged rather than denied in years. Then he came to New York and became,
advance. Indeed it is almost safe to say that it insofar as there is such a thing artistically, an

is only when the cul-_____American. He studied

tures of the East and ■ in the Art Students'

mingled that there is §1 there, worked in the

a great period of ar- studios of several New

observation into the R*^^^tSIH wherever there was

theory that great and '■ t > -^jB" anything of beautiful

fine productivity is the Hfe Aft ,, ' form to see. Then he

result of the conflu- ■rfp^gfcM I went to the Orient,

ence of different cul- ; I | 'p He went to Cambodia

tiate the theory by -?* massing which he still

citing the specific in- considers the greatest

stances. First there is I sculptural art of the

pure Greek even in its and watched the sil-

most classical mo- • ' houettes of the shadow

by the Egyptian and J_____i ra and collected the

and stimulated by the rics; and finally went

contact with Persia. Next, even as the oriental to China and was reborn. China gave him, first,
tradition had thus first traveled west so then the a profound obsession with a new point of view!
Hellenic and Roman traditions traveled in the He was absorbed by the monumental calm, the
opposite direction and met at Constantinople the unhurried certainty of an old, wise race. In the
luxurious arts of India and Persia whence the still but deep flowing detachment of the Chinese
Byzantine style was born. On the following swing individual and the Chincst art of the Tang and
of the pendulum the art of the East was carried Sung Dynasties he found something fundament-
by the crusades into France and Italy and the ally sympathetic. He walked over the unusual
Romanesque was born. And then, the pendulum ways, came upon abandoned temples, ferreted out
swinging rapidly back and forth in the quick bits of discarded statues, a head, an arm, a foot,
interchanges of travel and trade, the Gothic was studied them, took them with him, where the
evolved, built on oriental prototypes though built taking was legitimate. Out of his own personal
in western terms. And thus the history of art has instinct for coherent form grew a direct under-
repeated itself with the Renaissance the last great standing of these simplified but inevitable Chinese
brilliant instance. Artistic productivity came forms. China gave him a lesser but yet impor-
when East and West did meet. tant thing, a heightened awareness of decoration.