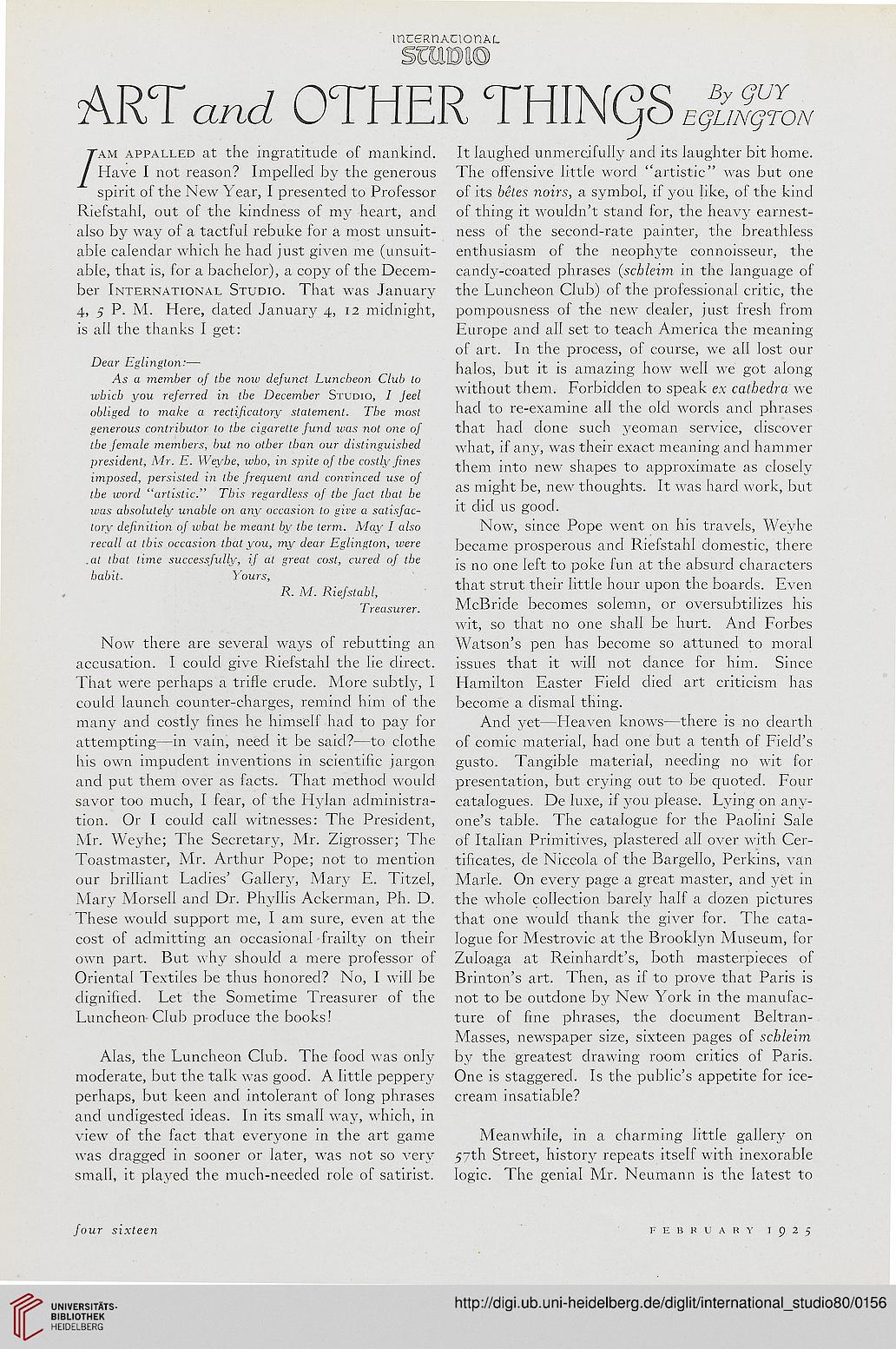 ART and OTHER THINGS «g&

/am appalled at the ingratitude of mankind. It laughed unmercifully and its laughter bit home.

Have I not reason? Impelled by the generous The offensive little word "artistic" was but one

spirit of the New Year, I presented to Professor of its betes noirs, a symbol, if you like, of the kind

Riefstahl, out of the kindness of my heart, and of thing it wouldn't stand lor, the heavy earnest-

also by way of a tactful rebuke for a most unsuit- ness of the second-rate painter, the breathless

able calendar which he had just given me (unsuit- enthusiasm of the neophyte connoisseur, the

able, that is, for a bachelor), a copy of the Decern- candy-coated phrases (schleim in the language of

ber International Studio. That was January the Luncheon Club) of the professional critic, the

is all the thanks I get: Europe and all set to teach America the meaning

of art. In the process, of course, we all lost our

Dear Eghngton. , halos, but it is amazing how well we got along

which you referred in the December studio, 1 Jeel \ v

obliged to make a rectificatory statement. The most had to re-examine all the old words and phrases
generous contributor to the cigarette Jund was not one of that had done such yeoman service, discover
the,female members, but no other than our distinguished what, if any, was their exact meaning and hammer

them into new shapes to approximate as closely
as might be, new thoughts. It was hard work, but

president, Mr. E. Weyhe, who, in spite of the costly fines
imposed, persisted in the frequent and convinced use of
the word "artistic." This regardless of the fact that he

was absolutely unable on any occasion to give a satisfac- rt did us good.

tory definition of what he meant by the term. May I also Now, since Pope Went on his travels, Weyhe

recall at this occasion that you, my dear Eglington, were became prosperous and Riefstahl domestic, there

R M Riefstahl that strut their little hour upon the boards, hven

Treasurer. McBride becomes solemn, or oversubtilizes his
wit, so that no one shall be hurt. And Forbes

accusation. I could give Riefstahl the lie direct, issues that it will not dance for him. Since

That were perhaps a trifle crude. More subtly, I Hamilton Easter Field died art criticism has

could launch counter-charges, remind him of the become a dismal thing.

attempting—in vain, need it be said?—to clothe of comic material, had one but a tenth of Field's

his own impudent inventions in scientific jargon gusto. Tangible material, needing no wit for

and put them over as facts. That method would presentation, but crying out to be quoted. Four

savor too much, I fear, of the Flylan administra- catalogues. De luxe, if you please. Lying on any-

tion. Or I could call witnesses: The President, one's table. The catalogue for the Paolini Sale

Mr. Weyhe; The Secretary, Mr. Zigrosser; The of Italian Primitives, plastered all over with Cer-

our brilliant Ladies' Gallery, Mary E. Titzel, Marie. On every page a great master, and yet in

These would support me, I am sure, even at the that one would thank the giver for. The cata-

cost of admitting an occasional frailty on their Iogue for Mestrovic at the Brooklyn Museum, for

own part. But why should a mere professor of Zuloaga at Reinhardt's, both masterpieces of

Oriental Textiles be thus honored? No, I will be Brinton's art. Then, as if to prove that Paris is

dignified. Let the Sometime Treasurer of the not to be outdone by New York in the manufac-

Masses, newspaper size, sixteen pages of schleim
Alas, the Luncheon Club. The food was only by the greatest drawing room critics of Paris,
moderate, but the talk was good. A little peppery One is staggered. Is the public's appetite for ice-
perhaps, but keen and intolerant of long phrases cream insatiable?
and undigested ideas. In its small way, which, in

view of the fact that everyone in the art game Meanwhile, in a charming little gallery on

was dragged in sooner or later, was not so very 57th Street, history repeats itself with inexorable

small, it played the much-needed role of satirist. logic. The genial Mr. Neumann is the latest to