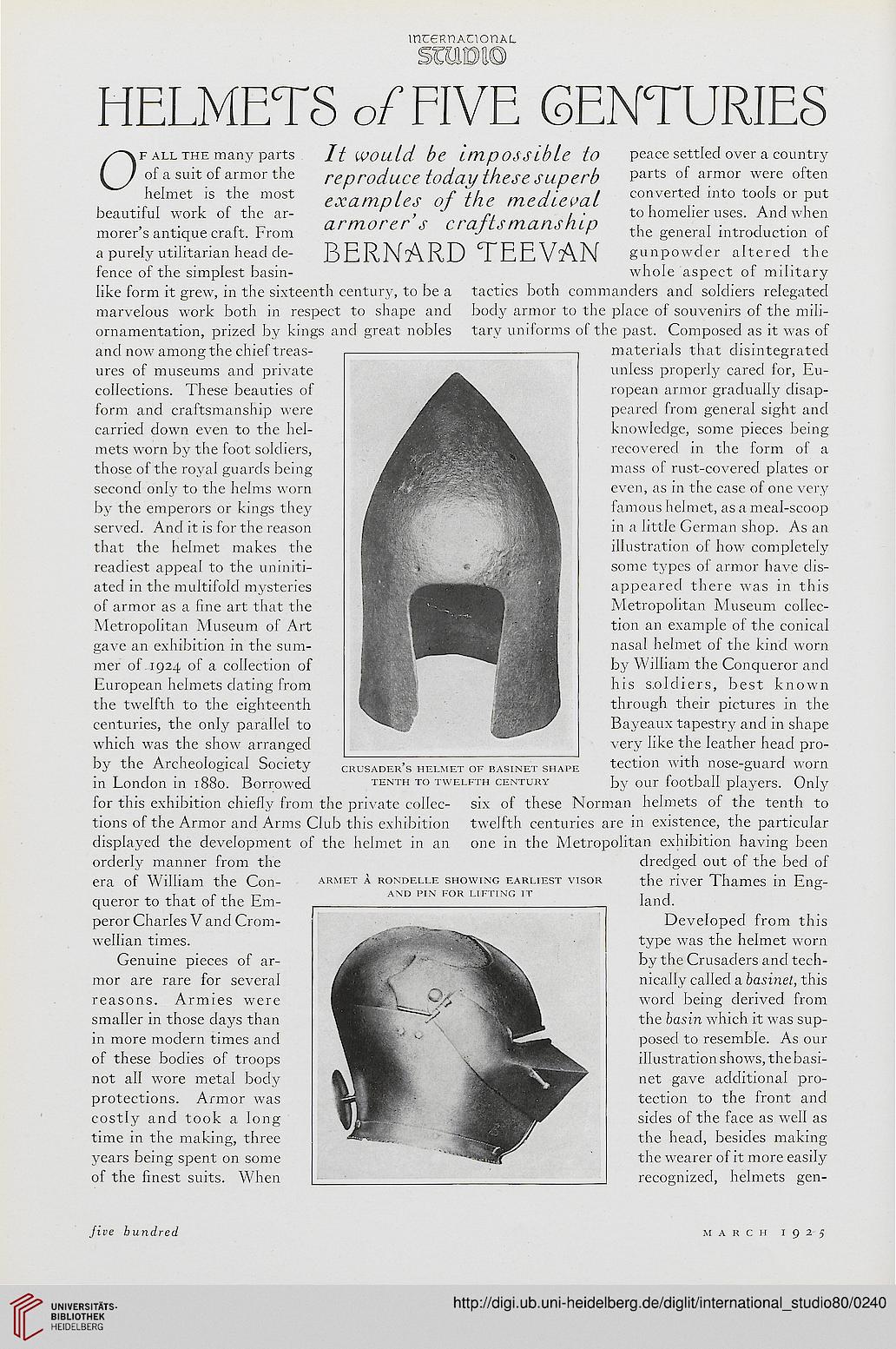 Of all the many parts It WOLlld be impossible to peace settled over a country
of a suit of armor the reproduce today these superb Parts of armor were often
helmet is the most examptes 0f the medieval co"vert<;d into tof °r Put

beautiful work of the ar- > n / ■ to homelier uses. And when

like form it grew, in the sixteenth century, to be a tactics both commanders and soldiers relegated
marvelous work both in respect to shape and body armor to the place of souvenirs of the mili-
ornamentation, prized by kings and great nobles tary uniforms of the past. Composed as it was of

and now among the chief treas- ,-, materials that disintegrated

ures of museums and private unless properly cared for, Eu-

form and craftsmanship were peared from general sight and

carried down even to the hel- JM knowledge, some pieces being

mets worn by the foot soldiers, A HL recovered in the form of a

second only to the helms worn M even, as in the case of one very

by the emperors or kings they I H famous helmet, as a meal-scoop

served. And it is for the reason in a little German shop. As an

that the helmet makes the illustration of how completely

readiest appeal to the uniniti- some types of armor have dis-

ated in the multifold mysteries ^flHHH^ appeared there was in this

of armor as a fine art that the | Metropolitan Museum collec-

Metropolitan Museum of Art tion an example of the conical

the twelfth to the eighteenth I through their pictures in the

centuries, the only parallel to Bayeaux tapestry and in shape

which was the show arranged very like the leather head pro-

by the Archeological Society crusader's helmet of rasinet shape tection with nose-guard worn
in London in 1880. Borrowed tenth to twelfth century by our football players. Only

for this exhibition chiefly from the private collec- six of these Norman helmets of the tenth to
tions of the Armor and Arms Club this exhibition twelfth centuries are in existence, the particular
displayed the development of the helmet in an one in the Metropolitan exhibition having been
orderly manner from the dredged out of the bed of

peror Charles V and Crom- . .t __ Developed from this

mor are rare for several /J$L nically called a basinet, this

smaller in those days than V H the basin which it was sup-
in more modern times and V posed to resemble. As our

years being spent on some the wearer of it more easily

of the finest suits. When [__I recognized, helmets gen-