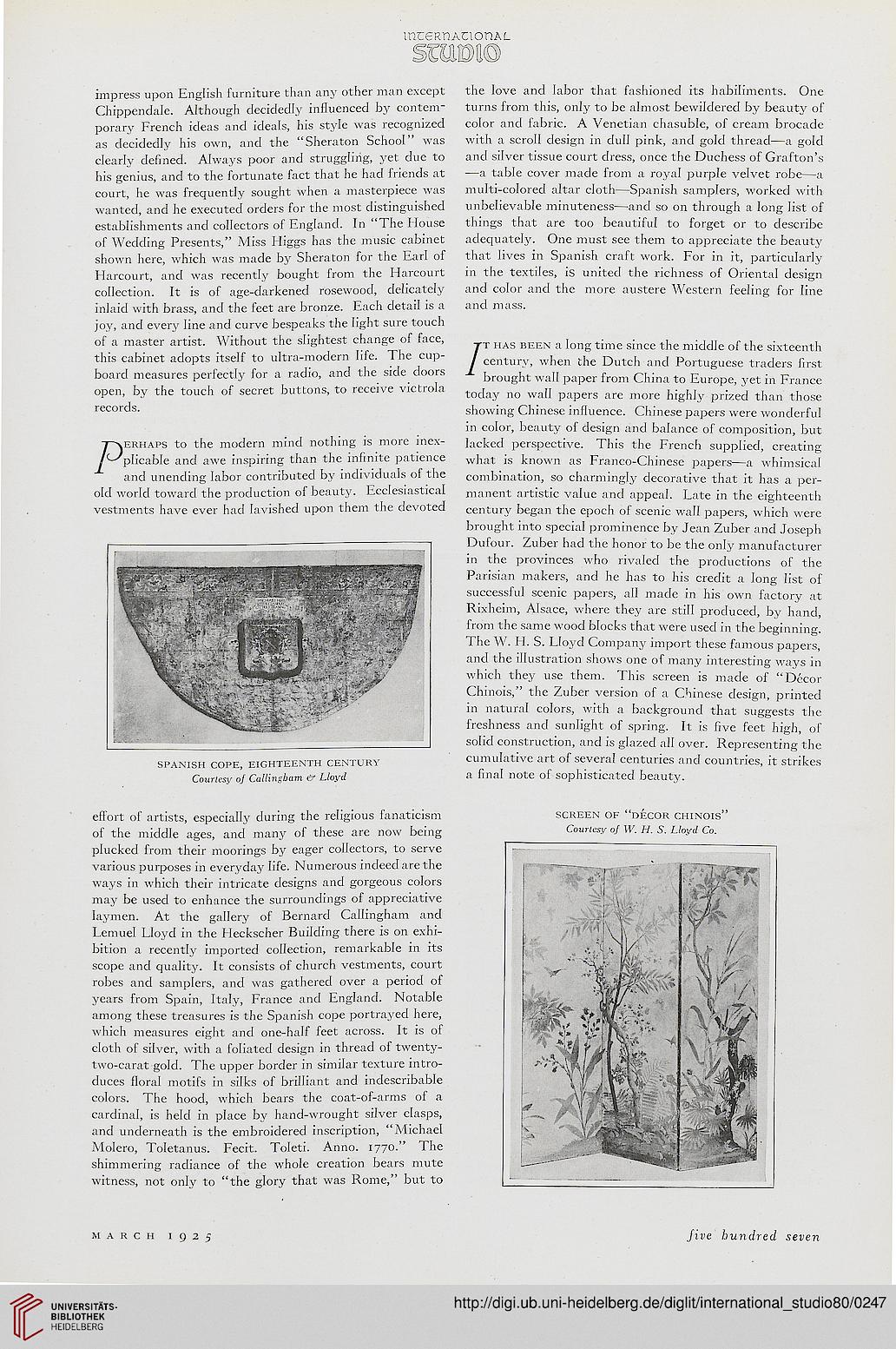 impress upon English furniture than any other man except
Chippendale. Although decidedly influenced by contem-
porary French ideas and ideals, his style was recognized
as decidedly his own, and the "Sheraton School" was
clearly defined. Always poor and struggling, yet due to
his genius, and to the fortunate fact that he had friends at
court, he was frequently sought when a masterpiece was
wanted, and he executed orders for the most distinguished
establishments and collectors of England. In "The House
of Wedding Presents," Miss Higgs has the music cabinet
shown here, which was made by Sheraton for the Earl of
Harcourt, and was recently bought from the Harcourt
collection. It is of age-darkened rosewood, delicately
inlaid with brass, and the feet are bronze. Each detail is a
joy, and every line and curve bespeaks the light sure touch
of a master artist. Without the slightest change of face,
this cabinet adopts itself to ultra-modern life. The cup-
board measures perfectly for a radio, and the side doors
open, by the touch of secret buttons, to receive victrola
records.

Perhaps to the modern mind nothing is more inex-
plicable and awe inspiring than the infinite patience
and unending labor contributed by individuals of the
old world toward the production of beauty. Ecclesiastical
vestments have ever had lavished upon them the devoted

effort of artists, especially during the religious fanaticism
of the middle ages, and many of these are now being
plucked from their moorings by eager collectors, to serve
various purposes in everyday life. Numerous indeed are the
ways in which their intricate designs and gorgeous colors
may be used to enhance the surroundings of appreciative
laymen. At the gallery of Bernard Callingham and
Lemuel Lloyd in the Heckscher Building there is on exhi-
bition a recently imported collection, remarkable in its
scope and quality. It consists of church vestments, court
robes and samplers, and was gathered over a period of
years from Spain, Italy, France and England. Notable
among these treasures is the Spanish cope portrayed here,
which measures eight and one-half feet across. It is of
cloth of silver, with a foliated design in thread of twenty-
two-carat gold. The upper border in similar texture intro-
duces floral motifs in silks of brilliant and indescribable
colors. The hood, which bears the coat-of-arms of a
cardinal, is held in place by hand-wrought silver clasps,
and underneath is the embroidered inscription, "Michael
Molero, Toletanus. Fecit. Toleti. Anno. 1770." The
shimmering radiance of the whole creation bears mute
witness, not only to "the glory that was Rome," but to

the love and labor that fashioned its habiliments. One
turns from this, only to be almost bewildered by beauty of
color and fabric. A Venetian chasuble, of cream brocade
with a scroll design in dull pink, and gold thread—a gold
and silver tissue court dress, once the Duchess of Grafton's
—a table cover made from a royal purple velvet robe—a
multi-colored altar cloth—Spanish samplers, worked with
unbelievable minuteness—and so on through a long list of
things that are too beautiful to forget or to describe
adequately. One must see them to appreciate the beauty
that lives in Spanish craft work. For in it, particularly
in the textiles, is united the richness of Oriental design
and color and the more austere Western feeling for line
and mass.

/t has been a long time since the middle of the sixteenth
century, when the Dutch and Portuguese traders first
brought wall paper from China to Europe, yet in France
today no wall papers are more highly prized than those
showing Chinese influence. Chinese papers were wonderful
in color, beauty of design and balance of composition, but
lacked perspective. This the French supplied, creating
what is known as Franco-Chinese papers—a whimsical
combination, so charmingly decorative that it has a per-
manent artistic value and appeal. Late in the eighteenth
century began the epoch of scenic wall papers, which were
brought into special prominence by Jean Zuber and Joseph
Dufour. Zuber had the honor to be the only manufacturer
in the provinces who rivaled the productions of the
Parisian makers, and he has to his credit a long list of
successful scenic papers, all made in his own factory at
Rixh eim, Alsace, where they are still produced, by hand
from the same wood blocks that were used in the beginning.
The W. H. S. Lloyd Company import these famous papers,
and the illustration shows one of many interesting ways in
which they use them. This screen is made of "Decor
Chinois," the Zuber version of a Chinese design, printed
in natural colors, with a background that suggests the
freshness and sunlight of spring. It is five feet high, of
solid construction, and is glazed all over. Representing the
cumulative art of several centuries and countries, it strikes
a final note of sophisticated beauty.