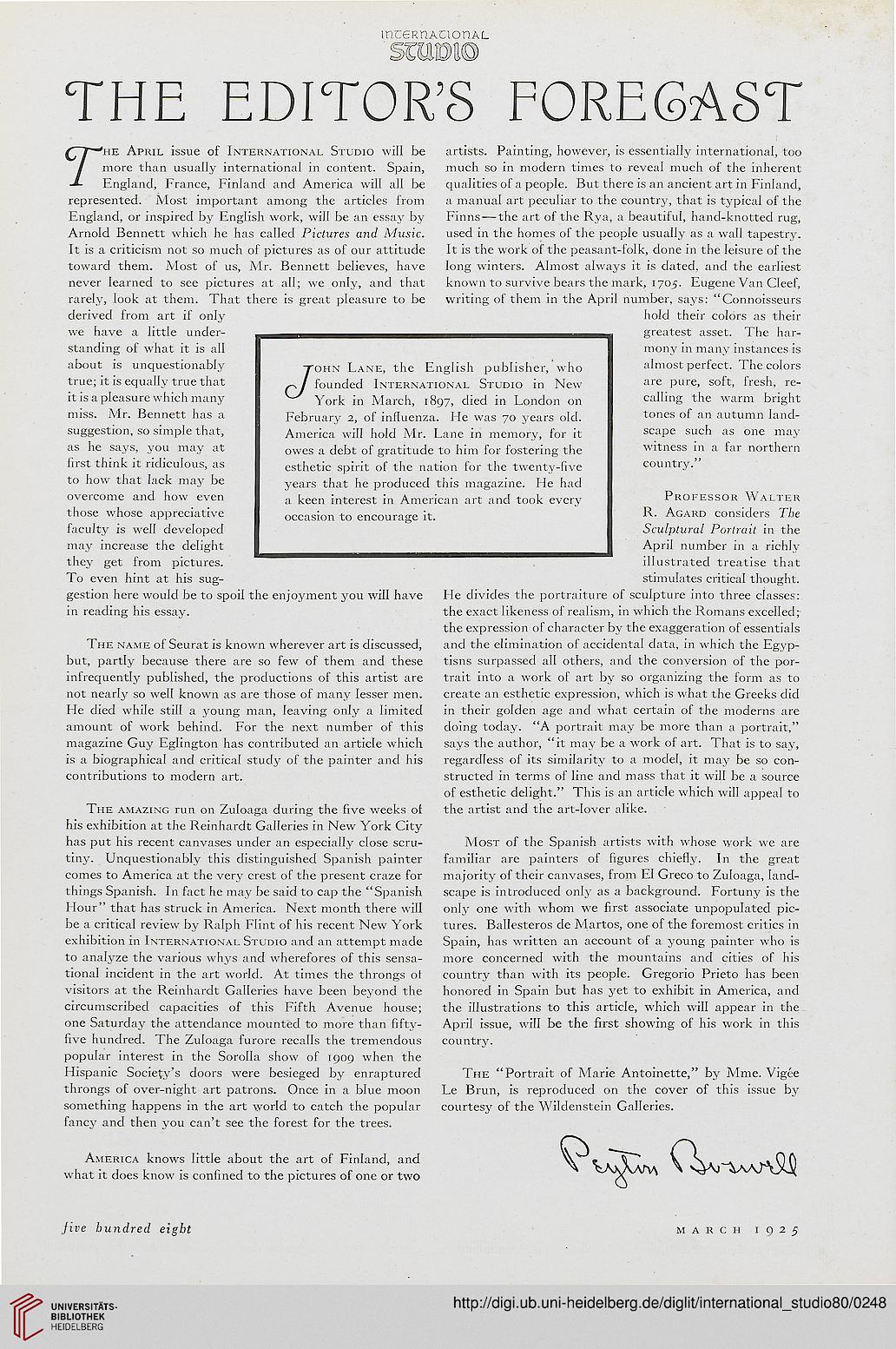 rhe April issue of International Studio will be artists. Painting, however, is essentially international, too

more than usually international in content. Spain, much so in modern times to reveal much of the inherent

England, France, Finland and America will all be qualities of a people. But there is an ancient art in Finland,

represented. Most important among the articles from a manual art peculiar to the country, that is typical of the

England, or inspired by English work, will be an essay by Finns — the art of the Rya, a beautiful, hand-knotted rug,

Arnold Bennett which he has called Pictures and Music. used in the homes of the people usually as a wall tapestry.

It is a criticism not so much of pictures as of our attitude It is the work of the peasant-folk, done in the leisure of the

toward them. Most of us, Mr. Bennett believes, have long winters. Almost always it is dated, and the earliest

never learned to see pictures at all; we only, and that known to survive bears the mark, 1705. Eugene Van Cleef,

rarely, look at them. That there is great pleasure to be writing of them in the April number, says: "Connoisseurs

derived from art if only hold their colors as their

we have a little under-
standing of what it is all
about is unquestionably-
true; it is equally true that
it is a pleasure which many
miss. Mr. Bennett has a
suggestion, so simple that,
as he says, you may at
first think it ridiculous, as
to how that lack may be
overcome and how even
those whose appreciative
faculty is well developed
may increase the delight
they get from pictures.

Lane, the English publisher, who
nded International Studio in New-
York in March, 1897, died in London on
February 2, of influenza. He was 70 years old.
America will hold Mr. Lane in memory, for it
owes a debt of gratitude to him for fostering the
esthetic spirit of the nation for the twenty-five
years that he produced this magazine. He had
a keen interest in American art and took every
occasion to encourage it.

greatest asset. The har-
mony in many instances is
almost perfect. The colors
are pure, soft, fresh, re-
calling the warm bright
tones of an autumn land-
scape such as one may
witness in a far northern
country."

Professor Walter
R. Agard considers The
Sculptural Portrait in the
April number in a richly
illustrated treatise that

To even hint at his sug- stimulates critical thought,

gestion here would be to spoil the enjoyment you will have He divides the portraiture of sculpture into three classes:

in reading his essay. the exact likeness of realism, in which the Romans excelled;

the expression of character by the exaggeration of essentials
The name of Seurat is known wherever art is discussed, and the elimination of accidental data, in which the Egyp-
but, partly because there are so few of them and these tisns surpassed all others, and the conversion of the por-
infrequently published, the productions of this artist are trait into a work of art by so organizing the form as to
not nearly so well known as are those of many lesser men. create an esthetic expression, which is what the Greeks did
He died while still a young man, leaving only a limited in their golden age and what certain of the moderns are
amount of work behind. For the next number of this doing today. "A portrait may be more than a portrait,"
magazine Guy Eglington has contributed an article which says the author, "it may be a work of art. That is to say,
is a biographical and critical study of the painter and his regardless of its similarity to a model, it may be so con-
contributions to modern art. structed in terms of line and mass that it will be a source

of esthetic delight." This is an article which will appeal to

The amazing run on Zuloaga during the five weeks ot the artist and the art-lover alike,
his exhibition at the Reinhardt Galleries in New York City

has put his recent canvases under an especially close scru- Most of the Spanish artists with whose work we are
tiny. Unquestionably this distinguished Spanish painter familiar are painters of figures chiefly. In the great
comes to America at the very crest of the present craze for majority of their canvases, from El Greco to Zuloaga, land-
things Spanish. In fact he may be said to cap the "Spanish scape is introduced only as a background. Fortuny is the
Hour" that has struck in America. Next month there will only one with whom we first associate unpopulated pic-
be a critical review by Ralph Flint of his recent New York tures. Ballesteros de Martos, one of the foremost critics in
exhibition in International Studio and an attempt made Spain, has written an account of a young painter who is
to analyze the various whys and wherefores of this sensa- more concerned with the mountains and cities of his
tional incident in the art world. At times the throngs ot country than with its people. Gregorio Prieto has been
visitors at the Reinhardt Galleries have been beyond the honored in Spain but has yet to exhibit in America, and
circumscribed capacities of this Fifth Avenue house; the illustrations to this article, which will appear in the
one Saturday the attendance mounted to more than fifty- April issue, will be the first showing of his work in this
five hundred. The Zuloaga furore recalls the tremendous country,
popular interest in the SoroIIa show of 1909 when the

Hispanic Society's doors were besieged by enraptured The "Portrait of Marie Antoinette," by Mme. Vigce

throngs of over-night art patrons. Once in a blue moon Le Brun, is reproduced on the cover of this issue by

something happens in the art world to catch the popular courtesy of the Wildenstein Galleries,
fancy and then you can't see the forest for the trees.