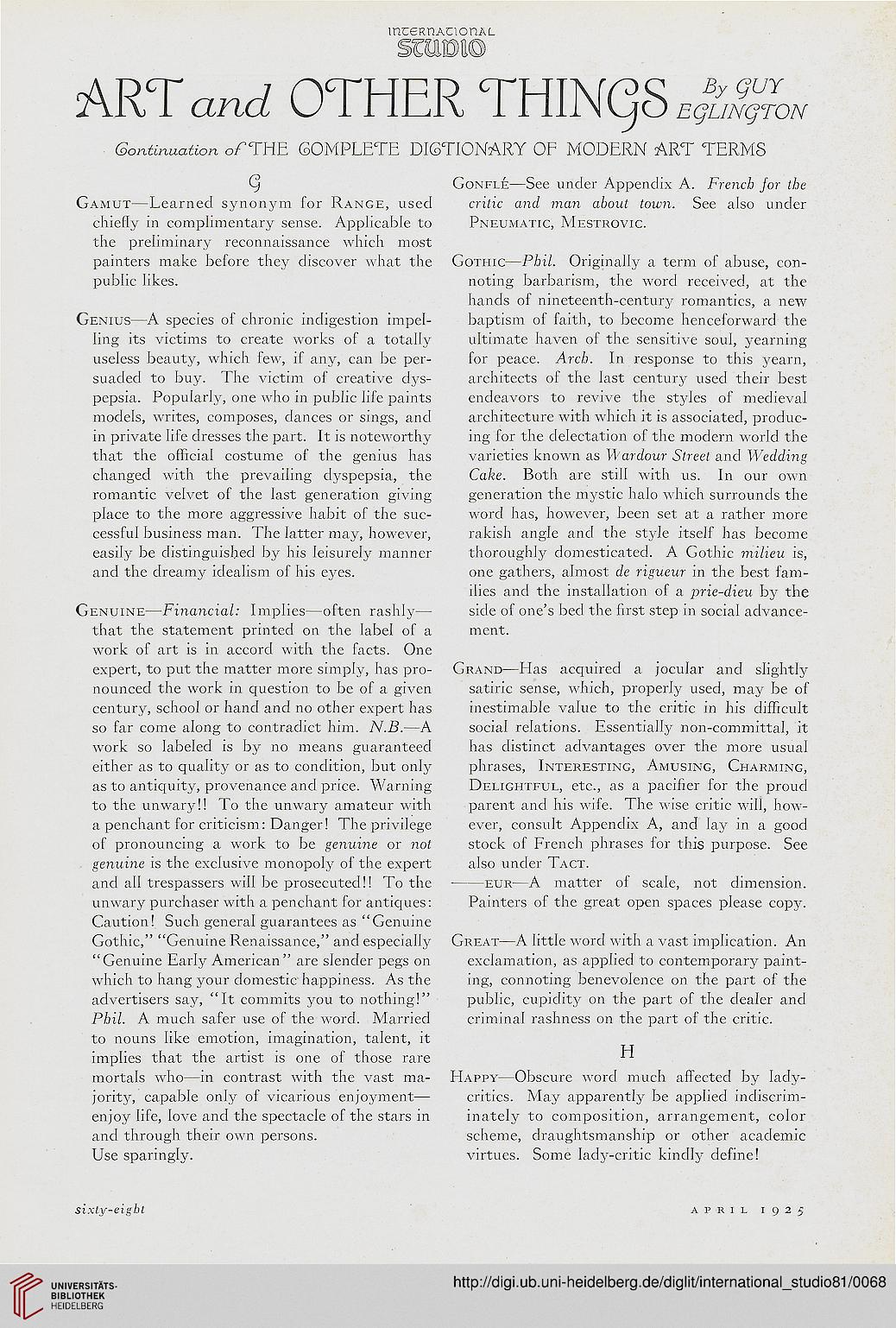 Gamut—Learned synonym ior Range, used
chiefly in complimentary sense. Applicable to
the preliminary reconnaissance which most
painters make before they discover what the
public likes.

Genius—A species of chronic indigestion impel-
ling its victims to create works of a totally
useless beauty, which few, if any, can be per-
suaded to buy. The victim of creative dys-
pepsia. Popularly, one who in public life paints
models, writes, composes, dances or sings, and
in private life dresses the part. It is noteworthy
that the official costume of the genius has
changed with the prevailing dyspepsia, the
romantic velvet of the last generation giving
place to the more aggressive habit of the suc-
cessful business man. The latter may, however,
easily be distinguished by his leisurely manner
and the dreamy idealism of his eyes.

Genuine—Financial: Implies—often rashly—
that the statement printed on the label of a
work of art is in accord with the facts. One
expert, to put the matter more simply, has pro-
nounced the work in question to be of a given
century, school or hand and no other expert has
so far come along to contradict him. N.B.—A
work so labeled is by no means guaranteed
either as to quality or as to condition, but only
as to antiquity, provenance and price. Warning
to the unwary!! To the unwary amateur with
a penchant for criticism: Danger! The privilege
of pronouncing a work to be genuine or not
genuine is the exclusive monopoly of the expert
and all trespassers wall be prosecuted!! To the
unwary purchaser with a penchant for antiques:
Caution! Such general guarantees as "Genuine
Gothic," "Genuine Renaissance," and especially
"Genuine Early American" are slender pegs on
which to hang your domestic happiness. As the
advertisers say, "It commits you to nothing!"
Phil. A much safer use of the word. Married
to nouns like emotion, imagination, talent, it
implies that the artist is one of those rare
mortals who—in contrast with the vast ma-
jority, capable only of vicarious enjoyment—
enjoy life, love and the spectacle of the stars in
and through their own persons.
Use sparingly.

Gonfle—See under Appendix A. French jor the
critic and man about town. See also under
Pneumatic, Mestrovic.

Gothic—Phil. Originally a term of abuse, con-
noting barbarism, the word received, at the
hands of nineteenth-century romantics, a new
baptism of faith, to become henceforward the
ultimate haven of the sensitive soul, yearning
for peace. Arch. In response to this yearn,
architects of the last century used their best
endeavors to revive the styles of medieval
architecture with which it is associated, produc-
ing for the delectation of the modern world the
varieties known as Wardour Street and Wedding
Cake. Both are still with us. In our own
generation the mystic halo which surrounds the
word has, however, been set at a rather more
rakish angle and the style itself has become
thoroughly domesticated. A Gothic milieu is,
one gathers, almost de rigueur in the best fam-
ilies and the installation of a prie-dieu by the
side of one's bed the first step in social advance-
ment.

Grand—Has acquired a jocular and slightly
satiric sense, which, properly used, may be of
inestimable value to the critic in his difficult
social relations. Essentially non-committal, it
has distinct advantages over the more usual
phrases, Interesting, Amusing, Charming,
Delightful, etc., as a pacifier for the proud
parent and his wife. The wise critic wall, how-
ever, consult Appendix A, and lay in a good
stock of French phrases for this purpose. See
also under Tact.

--eur—A matter of scale, not dimension.