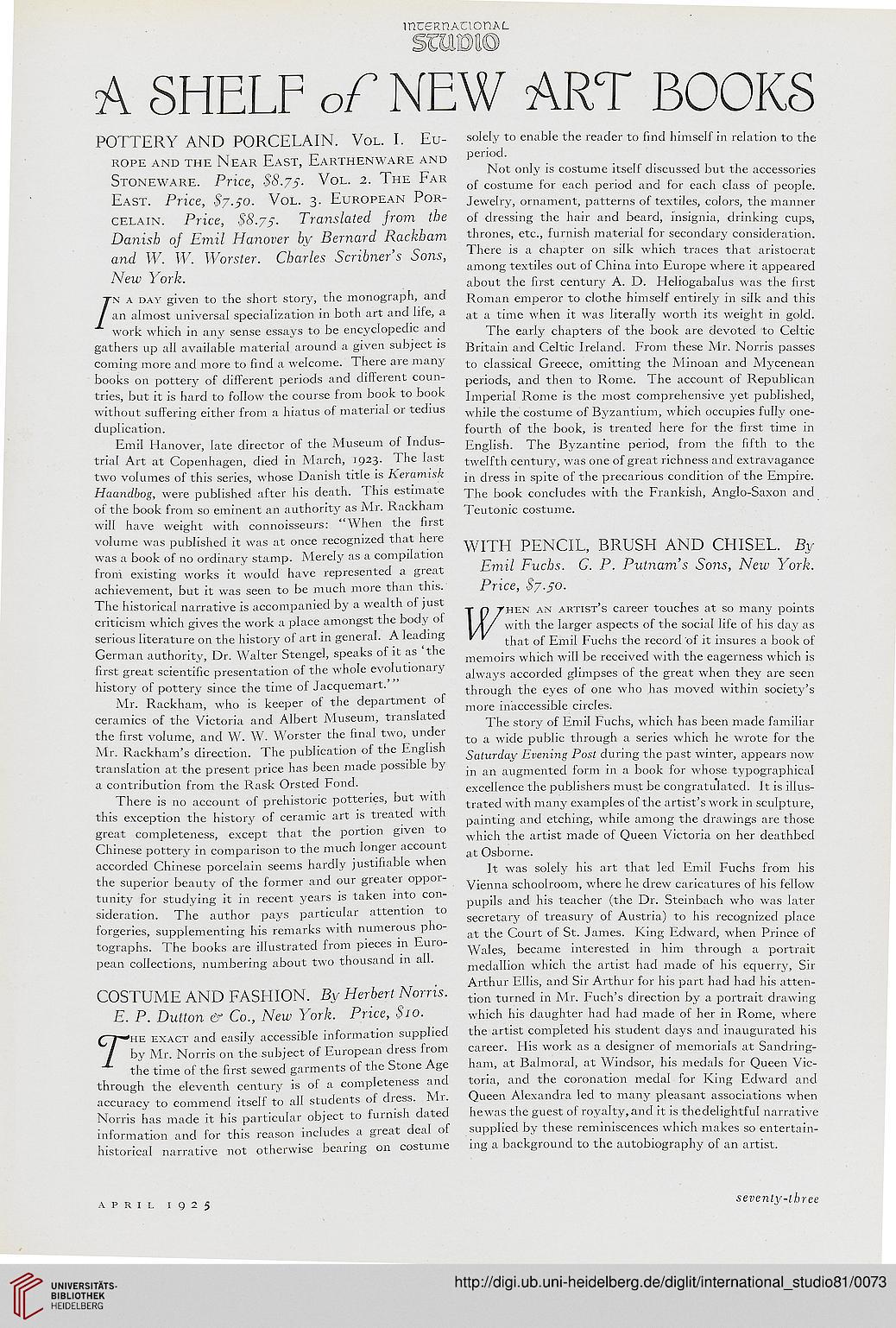 POTTERY AND PORCELAIN. Vol. I. Eu- solely to enable the reader to find himself in relation to the

rope and the near east, earthenware and pen° '

celain. Price, $8.75. Translated from the of dressing the hair and beard, insignia, drinking cups,

and W. W. Worster. Charles Scribner's Sons, There is a chapter on sUk which traces that aristocrat

among textiles out ot China into Lsurope where it appeared

New I ork. about the first century A. D. Heliogabalus was the first

/N a day given to the short story, the monograph, and Roman emperor to clothe himself entirely in silk and this
an almost universal specialization in both art and life, a at a time when it was literally worth its weight in gold,
work which in any sense essays to be encyclopedic and The early chapters of the book are devoted to Celtic
gathers up all available material around a given subject is Britain and Celtic Ireland. From these Mr. Norris passes
coming more and more to find a welcome. There are many t0 cIassjcaI Greece, omitting the Minoan and Mycenean
books on pottery of different periods and different coun- periods, and then to Rome. The account of Republican
tries, but it is hard to follow the course from book to book Imperial Rome is the most comprehensive yet published,
without suffering either from a hiatus of material or tedius while the costume of Byzantium, which occupies fully one-
duplication, fourth of the book, is treated here for the first time in
Emil Hanover, late director of the Museum of Indus- English. The Byzantine period, from the fifth to the
trial Art at Copenhagen, died in March, 1923. The last twelfth century, was one of great richness and extravagance
two volumes of this series, whose Danish title is Keramisk jn dress in spite of the precarious condition of the Empire.
Haandbog, were published after his death. This estimate y^e book concludes with the Frankish, Anglo-Saxon and
of the book from so eminent an authority as Mr. Rackham Teutonic costume,
will have weight with connoisseurs: "When the first

volume was published it was at once recognized that here WITH pENdL, BRUSH AND CHISEL. BV
was a book of no ordinary stamp. Merely as a compilation _

from existing works it would have represented a great •- >

criticism which gives the work a place amongst the body ol IV/ whh the IaJger aspects of the soc;,a j;le of Jlis day as

serious literature on the history of art in general. A leading V V ^ of Ern;[ puchs the record of it insures a book of

German authority, Dr. Walter Stengel, speaks of it as the memo;rs which wiII be received with the eagerness which is

history of pottery since the time of Jacquemart.'" through the eyes of one who has moved within society's

Mr. Rackham, who is keeper of the department of inaccessifaIe c;rcles.

ceramics of the Victoria and Albert Museum, translated The stQry ()f Em;l FuchSt which has been made familiar

Mr. Rackham's direction. The publication of the English Saturday Evening Post during the past winter, appears now

a contribution from the Rask Orsted Fond. excellence the publishers must be congratulated. It is illus-

There is no account of prehistoric potteries, but with trated with many examples of the artist's work in sculpture,

this exception the history of ceramic art is treated with pamtmg and etching, while among the drawings are those
great completeness, except that the portion given to ^ made of Queen Victoria on her deathbed

Chinese pottery in comparison to the much longer account ^ Osborne.

the superior beauty of the former and our greater oppor- y;enna schoo[room, where he drew caricatures of his fellow
tunity for studying it in recent years is taken into con- ^ h;s teacher (the Dr_ Steinbach who was later

sideration. The author pays particular attention to secretary Gf treasury of Austria) to his recognized place

forgeries, supplementing his remarks with numerous pno- ^ ^ C(mn of gt James Kjng Edward, when Prince of
tographs. The books are illustrated from pieces in Euro- became interested in him through a portrait

pean collections, numbering about two thousand in all. medaIIion which the artist had made of his equerry, Sir

Arthur Ellis, and Sir Arthur for his part had had his atten-

COSTUME AND FASHION. By Herbert

' tion turned in Mr. Fuch's direction by a portrait drawing

he exact and easily accessible information supplied the artist completed his student days and inaugurated
by Mr. Norris on the subject of European dress from career. His work as a designer of memorials at Sandring-
the time of the first sewed garments of the Stone Age ham, at Balmoral, at Windsor, his medals for Queen Vic-
through the eleventh century is of a completeness and toria, and the coronation medal for King Edward and
accuracy to commend itself to all students of dress. Mr. Queen Alexandra led to many pleasant associations when
Norris has made it his particular object to furnish dated he was the guest of royalty, and it is thedelightful narrative
information and for this reason includes a great deal of supplied by these reminiscences which makes so entertain-
historical narrative not otherwise bearing on costume ing a background to the autobiography of an artist.