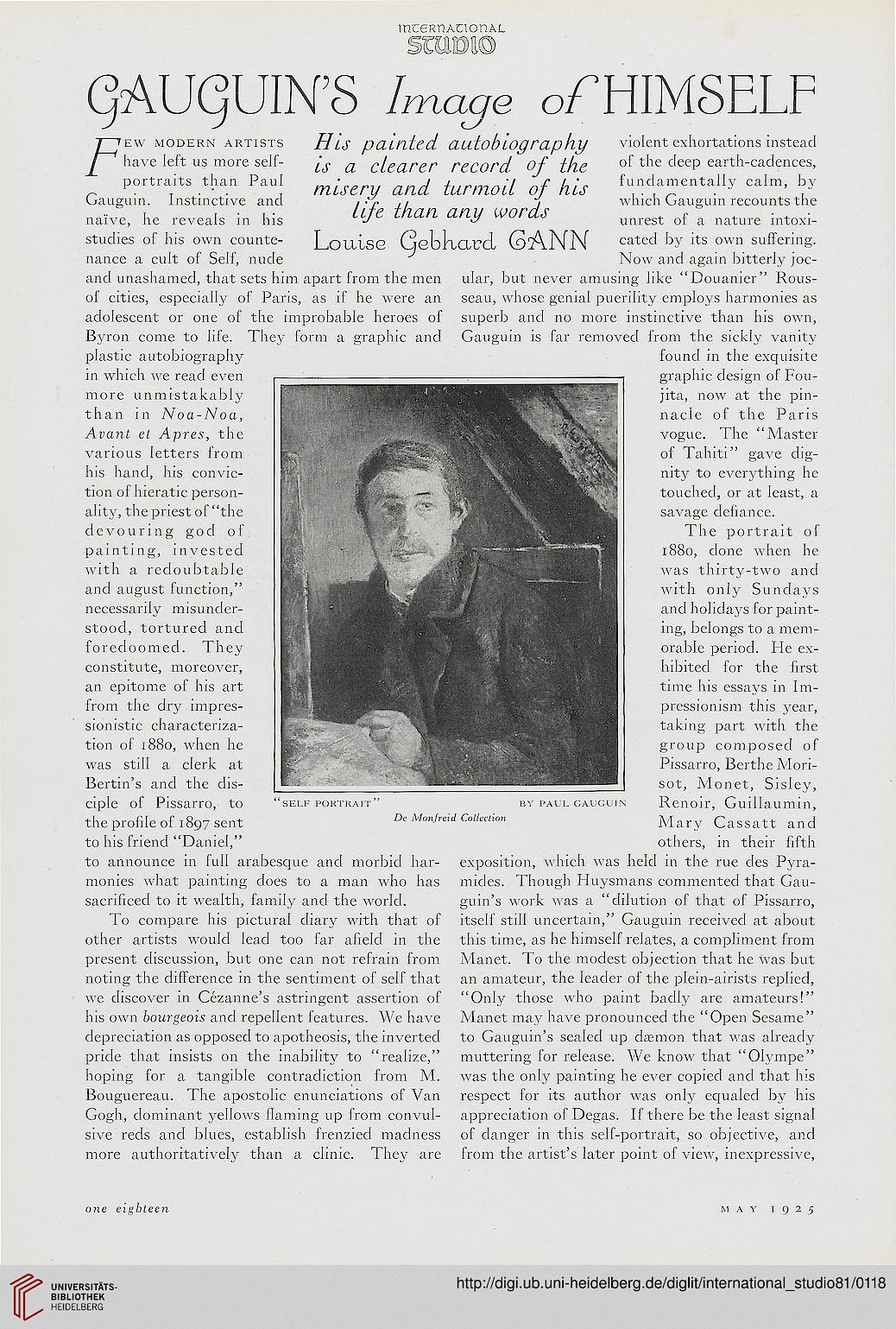 portraits than Paul m/ and turmoil of his fundamentally calm, by

Gauguin, instinctive and /•/•// i which. Gauguin recounts the

naive, he reveals in his J J y unrest ol a nature mtoxi-

studies of his own counte- LoiXLSS GetKcLUcL (SAlMlNf cated by its own suffering,
nance a cult of Self, nude ■ Now and again bitterly joc-

and unashamed, that sets him apart from the men ular, but never amusing like "Douanier" Rous-
of cities, especially of Paris, as if he were an seau, whose genial puerility employs harmonies as
adolescent or one of the improbable heroes of superb and no more instinctive than his own,
Byron come to life. They form a graphic and Gauguin is far removed from the sickly vanity
plastic autobiography found in the exquisite

graphic design of Fou-
jita, now at the pin-
nacle of the Paris
vogue. The "Master
of Tahiti" gave dig-
nity to everything he
touched, or at least, a
savage defiance.

The portrait of
1880, done when he
was thirty-two and
with only Sundays
and holidays for paint-
ing, belongs to a mem-
orable period. He ex-
hibited for the first
time his essays in Im-
pressionism this year,
taking part with the
group composed of
Pissarro, Berthe Mori-
sot, Monet, Sisley,

ciple of Pissarro, to "self portrait" by paul gauguin Renoir, Guillaumin,

the profile of 1897 sent De Monjrdd Collection Mary Cassatt and

to his friend "Daniel," others, in their fifth

to announce in lull arabesque and morbid har- exposition, which was held in the rue des Pyra-
monies what painting does to a man who has mides. Though Huysmans commented that Gau-
sacrificed to it wealth, family and the world. guin's work was a "dilution of that of Pissarro,

To compare his pictural diary with that of itself still uncertain," Gauguin received at about
other artists would lead too far afield in the this time, as he himself relates, a compliment from
present discussion, but one can not refrain from Manet. To the modest objection that he was but
noting the difference in the sentiment of self that an amateur, the leader of the plein-airists replied,
we discover in Cezanne's astringent assertion of "Only those who paint badly are amateurs!"
his own bourgeois and repellent features. We have Manet may have pronounced the "Open Sesame"
depreciation as opposed to apotheosis, the inverted to Gauguin's sealed up dsemon that was already
pride that insists on the inability to "realize," muttering for release. We know that "Olympe"
hoping for a tangible contradiction from M. was the only painting he ever copied and that his
Bouguereau. The apostolic enunciations of Van respect for its author was only equaled by his
Gogh, dominant yellows flaming up from convul- appreciation of Degas. If there be the least signal
sive reds and blues, establish frenzied madness of danger in this self-portrait, so objective, and
more authoritatively than a clinic. They are from the artist's later point of view, inexpressive,

in which we read even
more unmistakably
than in Noa-Noa,
Avant et Apres, the
various letters from
his hand, his convic-
tion of hieratic person-
ality, the priest of "the
devouring god of
painting, invested
with a redoubtable
and august function,"
necessarily misunder-
stood, tortured and
foredoomed. They
constitute, moreover,
an epitome of his art
from the dry impres-
sionistic characteriza-
tion of 1880, when he
was still a clerk at
Bertin's and the dis-