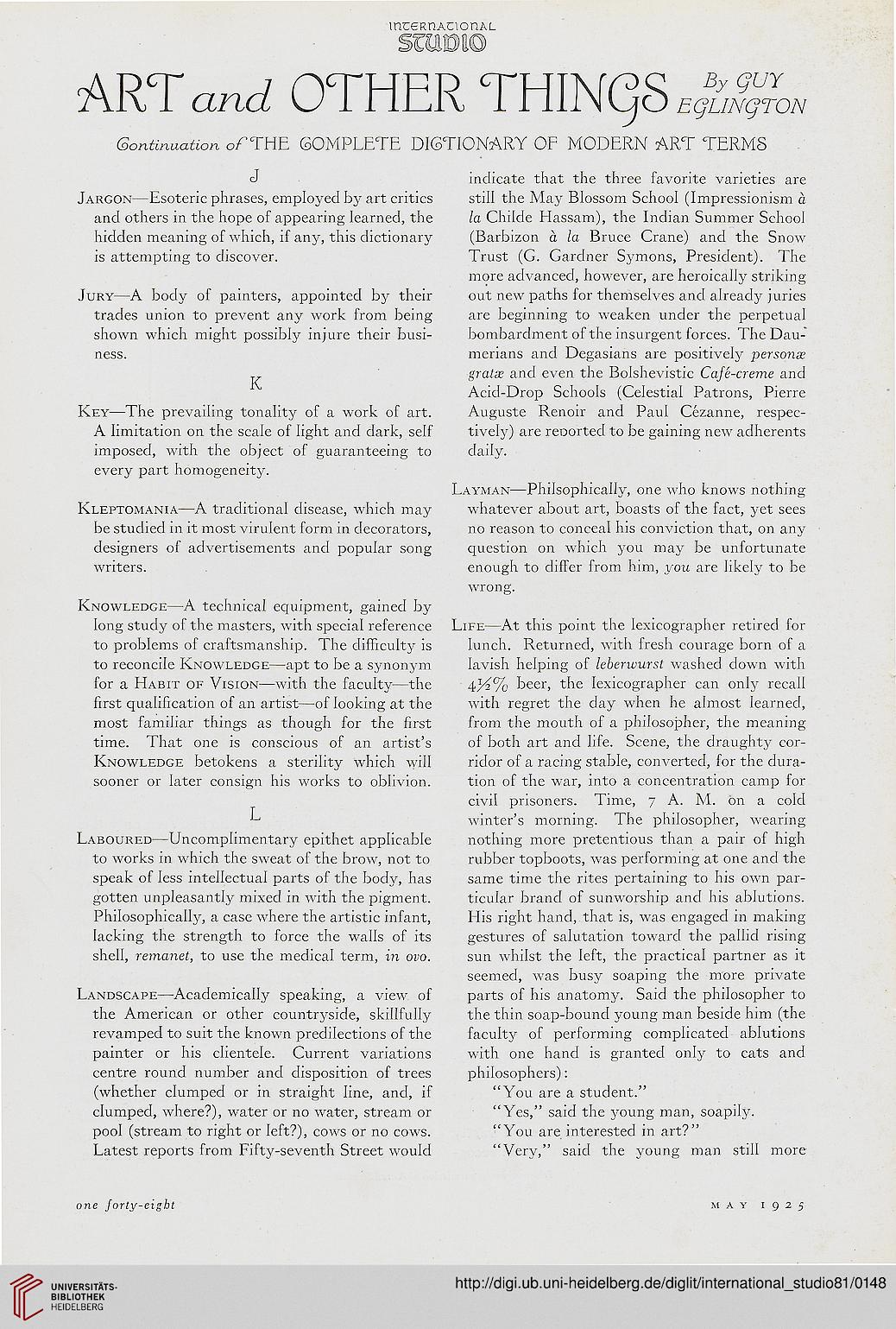 ART and OTHER THINGS ,Ml

Jargon—Esoteric phrases, employed by art critics
and others in the hope of appearing learned, the
hidden meaning of which, if any, this dictionary
is attempting to discover.

Jury—A body of painters, appointed by their
trades union to prevent any work from being
shown which might possibly injure their busi-
ness.

Key—The prevailing tonality of a work of art.
A limitation on the scale of light and dark, self
imposed, with the object of guaranteeing to
every part homogeneity.

Kleptomania—A traditional disease, which may
be studied in it most virulent form in decorators,
designers of advertisements and popular song
writers.

Knowledge—A technical equipment, gained by
long study of the masters, with special reference
to problems of craftsmanship. The difficulty is
to reconcile Knowledge—apt to be a synonym
for a Habit of Vision—with the faculty—the
first qualification of an artist—of looking at the
most familiar things as though for the first
time. That one is conscious of an artist's
Knowledge betokens a sterility which will
sooner or later consign his works to oblivion.

Laboured—Uncomplimentary epithet applicable
to works in which the sweat of the brow, not to
speak of less intellectual parts of the body, has
gotten unpleasantly mixed in with the pigment.
Philosophically, a case where the artistic infant,
lacking the strength to force the walls of its
shell, remanet, to use the medical term, in ovo.

Landscape—Academically speaking, a view of
the American or other countryside, skillfully
revamped to suit the known predilections of the
painter or his clientele. Current variations
centre round number and disposition of trees
(whether clumped or in straight line, and, if
clumped, where?), water or no water, stream or
pool (stream to right or left?), cows or no cows.
Latest reports from Fifty-seventh Street would

indicate that the three favorite varieties are
still the May Blossom School (Impressionism a
la Childe Hassam), the Indian Summer School
(Barbizon a la Bruce Crane) and the Snow
Trust (G. Garciner Symons, President). The
more advanced, however, are heroically striking
out new paths for themselves and already juries
are beginning to weaken under the perpetual
bombardment of the insurgent forces. The Dau-
merians and Degasians are positively persons
gratse and even the Bolshevistic Cafe-creme and
Acid-Drop Schools (Celestial Patrons, Pierre
Auguste Renoir and Paul Cezanne, respec-
tively) are reDorted to be gaining new adherents
daily.

Layman—Philsophically, one who knows nothing
whatever about art, boasts of the fact, yet sees
no reason to conceal his conviction that, on any
question on which you may be unfortunate
enough to differ from him, you are likely to be
wrong.

Life—At this point the lexicographer retired for
lunch. Returned, with fresh courage born of a
lavish helping of leberwurst washed down with
AJA% beer, the lexicographer can only recall
with regret the day when he almost learned,
from the mouth of a philosopher, the meaning
of both art and life. Scene, the draughty cor-
ridor of a racing stable, converted, for the dura-
tion of the war, into a concentration camp for
civil prisoners. Time, 7 A. M. on a cold
winter's morning. The philosopher, wearing
nothing more pretentious than a pair of high
rubber topboots, was performing at one and the
same time the rites pertaining to his own par-
ticular brand of sunworship and his ablutions.
His right hand, that is, was engaged in making
gestures of salutation toward the pallid rising
sun whilst the left, the practical partner as it
seemed, was busy soaping the more private
parts of his anatomy. Said the philosopher to
the thin soap-bound young man beside him (the
faculty of performing complicated ablutions
with one hand is granted only to cats and
philosophers):

"You are a student."