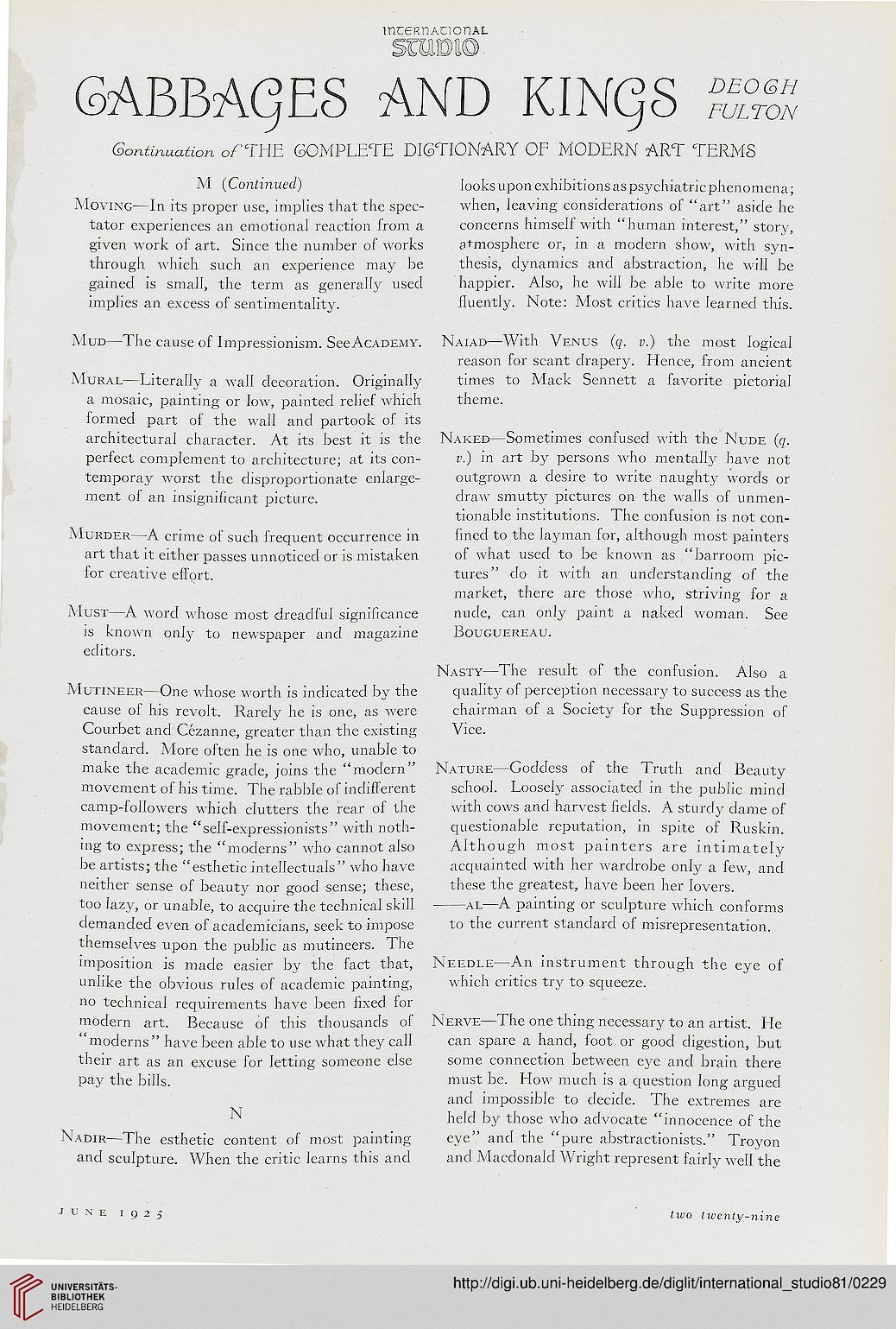 Moving—In its proper use, implies that the spec- when, leaving considerations of "art" aside he

tator experiences an emotional reaction from a concerns himself with "human interest," story,

given work of art. Since the number of works atmosphere or, in a modern show, with syn-

through which such an experience may be thesis, dynamics and abstraction, he will be

gained is small, the term as generally used happier. Also, he will be able to write more

implies an excess of sentimentality. fluently. Note: Most critics have learned this.

Mud—The cause of Impressionism. See Academy.

Mural—Literally a wall decoration. Originally
a mosaic, painting or low, painted relief which
formed part of the wall and partook of its
architectural character. At its best it is the
perfect complement to architecture; at its con-
temporay worst the disproportionate enlarge-
ment of an insignilicant picture.

Mu rder—A crime of such frequent occurrence in
art that it either passes unnoticed or is mistaken
for creative effort.

Must—A word whose most dreadful significance
is known only to newspaper and magazine
editors.

Mutineer—One whose worth is indicated by the
cause of his revolt. Rarely he is one, as were
Courbet and Cezanne, greater than the existing
standard. More often he is one who, unable to
make the academic grade, joins the "modern"
movement of his time. The rabble of indifferent
camp-followers which clutters the rear of the
movement; the "self-expressionists" with noth-
ing to express; the "moderns" who cannot also
be artists; the "esthetic intellectuals" who have
neither sense of beauty nor good sense; these,
too lazy, or unable, to acquire the technical skill
demanded even of academicians, seek to impose
themselves upon the public as mutineers. The
imposition is made easier by the fact that,
unlike the obvious rules of academic painting,
no technical requirements have been fixed for
modern art. Because of this thousands of
"moderns" have been able to use what they call
their art as an excuse for letting someone else
pay the bills.

Nadir—The esthetic content of most painting
and sculpture. When the critic learns this and

Naked—Sometimes confused with the Nude (q.
v.) in art by persons who mentally have not
outgrown a desire to write naughty words or
draw smutty pictures on the walls of unmen-
tionable institutions. The confusion is not con-
fined to the layman for, although most painters
of what used to be known as "barroom pic-
tures" do it with an understanding of the
market, there are those who, striving for a
nude, can only paint a naked woman. See
Bouguereau.

Nasty—The result of the confusion. Also a
quality of perception necessary to success as the
chairman of a Society for the Suppression of

Nature—Goddess of the Truth and Beauty
school. Loosely associated in the public mind
with cows and harvest fields. A sturdy dame of
questionable reputation, in spite of Ruskin.
Although most painters are intimately
acquainted with her wardrobe only a few, and
these the greatest, have been her lovers.
—al—A painting or sculpture which conforms
to the current standard of misrepresentation.

Needle—An instrument through the eye of
which critics try to squeeze.

Nerve—The one thing necessary to an artist. He
can spare a hand, foot or good digestion, but
some connection between eye and brain there
must be. How much is a question long argued
and impossible to decide. The extremes are
held by those who advocate "innocence of the
eye" and the "pure abstractionists." Troyon
and Macdonald Wright represent fairly well the