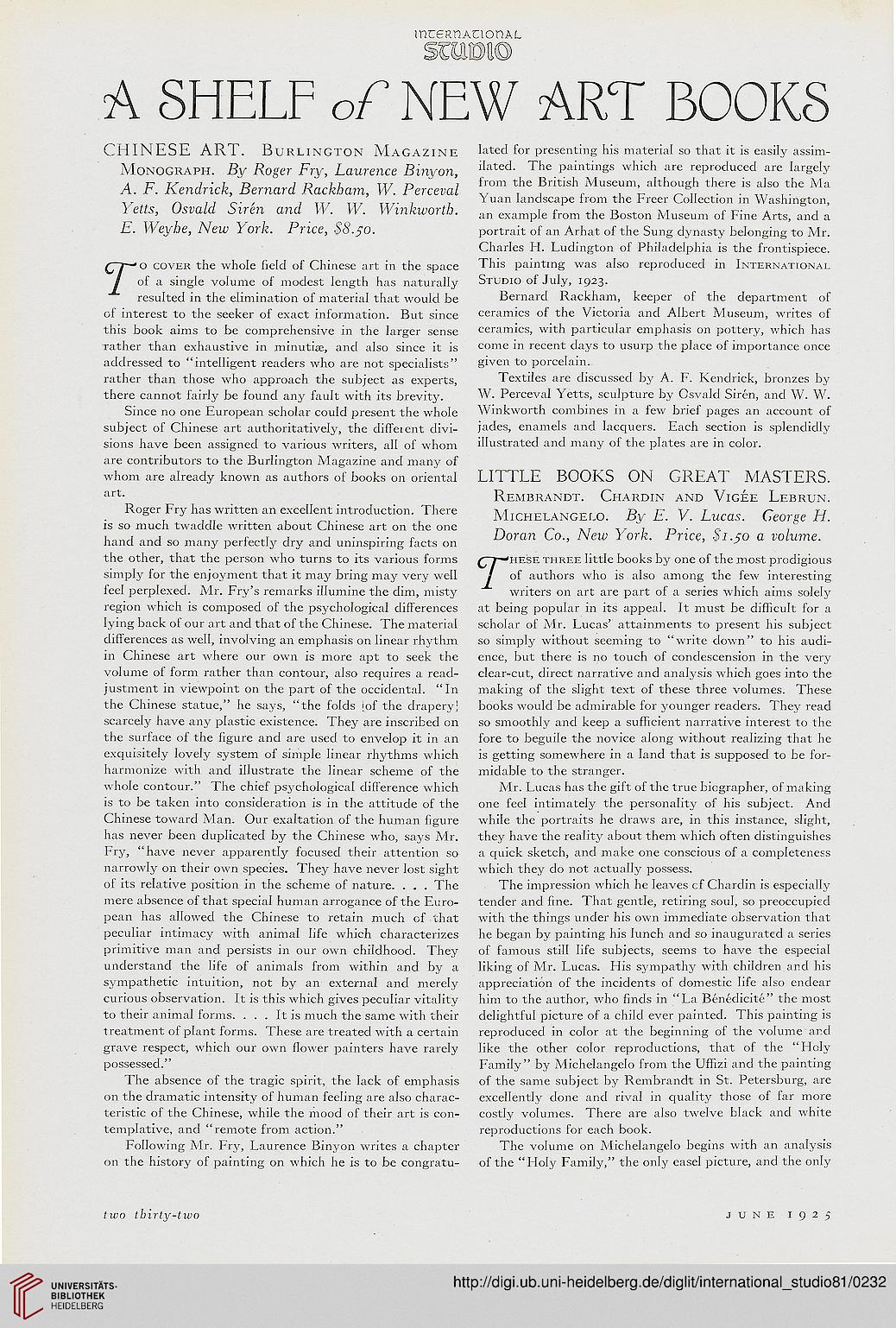 (TT^o cover the whole field of Chinese art in the space
/ of a single volume of modest length has naturally
resulted in the elimination of material that would be
of interest to the seeker of exact information. But since
this book aims to be comprehensive in the larger sense
rather than exhaustive in minutiae, and also since it is
addressed to "intelligent readers who are not specialists"
rather than those who approach the subject as experts,
there cannot fairly be found any fault with its brevity.

Since no one European scholar could present the whole
subject of Chinese art authoritatively, the diffeient divi-
sions have been assigned to various writers, all of whom
are contributors to the Burlington Magazine and many of
whom are already known as authors of books on oriental
art.

Roger Fry has written an excellent introduction. There
is so much twaddle written about Chinese art on the one
hand and so many perfectly dry and uninspiring facts on
the other, that the person who turns to its various forms
simply for the enjoyment that it may bring may very well
feel perplexed. Mr. Fry's remarks illumine the dim, misty
region which is composed of the psychological differences
lying back of our art and that of the Chinese. The material
differences as well, involving an emphasis on linear rhythm
in Chinese art where our own is more apt to seek the
volume of form rather than contour, also requires a read-
justment in viewpoint on the part of the occidental. "In
the Chinese statue," he says, "the folds [of the drapery;
scarcely have any plastic existence. They are inscribed on
the surface of the figure and are used to envelop it in an
exquisitely lovely system of simple linear rhythms which
harmonize with and illustrate the linear scheme of the
whole contour." The chief psychological difference which
is to be taken into consideration is in the attitude of the
Chinese toward Man. Our exaltation of the human figure
has never been duplicated by the Chinese who, says Mr.
Fry, "have never apparently focused their attention so
narrowly on their own species. They have never lost sight
of its relative position in the scheme of nature. . . . The
mere absence of that special human arrogance of the Euro-
pean has allowed the Chinese to retain much of that
peculiar intimacy with animal life which characterizes
primitive man and persists in our own childhood. They
understand the life of animals from within and by a
sympathetic intuition, not by an external and merely
curious observation. It is this which gives peculiar vitality
to their animal forms. ... It is much the same with their
treatment of plant forms. These are treated with a certain
grave respect, which our own flower painters have rarely
possessed."

The absence of the tragic spirit, the lack of emphasis
on the dramatic intensity of human feeling are also charac-
teristic of the Chinese, while the mood of their art is con-
templative, and "remote from action."

Following Mr. Fry, Laurence Binyon writes a chapter
on the history of painting on which he is to be congratu-

lated for presenting his material so that it is easily assim-
ilated. The paintings which are reproduced are largely
from the British Museum, although there is also the Ma
Yuan landscape from the Freer Collection in Washington,
an example from the Boston Museum of Fine Arts, and a
portrait of an Arhat of the Sung dynasty belonging to Mr.
Charles H. Ludington of Philadelphia is the frontispiece.
This painting was also reproduced in International
Studio of July, 1923.

Bernard Rackham, keeper of the department of
ceramics of the Victoria and Albert Museum, writes of
ceramics, with particular emphasis on pottery, which has
come in recent days to usurp the place of importance once
given to porcelain.

Textiles are discussed by A. F. Kendrick, bronzes by
W. Perceval Yetts, sculpture by Osvald Siren, and W. W.
Winkworth combines in a few brief pages an account of
jades, enamels and lacquers. Each section is splendidly
illustrated and many of the plates are in color.

rhese three little books by one of the most prodigious
of authors who is also among the few interesting
writers on art are part of a series which aims solely
at being popular in its appeal. It must be difficult for a
scholar of Mr. Lucas' attainments to present his subject
so simply without seeming to "write down" to his audi-
ence, but there is no touch of condescension in the very
clear-cut, direct narrative and analysis which goes into the
making of the slight text of these three volumes. These
books would be admirable for younger readers. They read
so smoothly and keep a sufficient narrative interest to the
fore to beguile the novice along without realizing that he
is getting somewhere in a land that is supposed to be for-
midable to the stranger.

Mr. Lucas has the gift of the true biographer, of making
one feel intimately the personality of his subject. And
while the portraits he draws are, in this instance, slight,
they have the reality about them which often distinguishes
a quick sketch, and make one conscious of a completeness
which they do not actually possess.

The impression which he leaves cf Chardin is especially
tender and fine. That gentle, retiring soul, so preoccupied
with the things under his own immediate observation that
he began by painting his lunch and so inaugurated a series
of famous still life subjects, seems to have the especial
liking of Mr. Lucas. His sympathy with children and his
appreciation of the incidents of domestic life also endear
him to the author, who finds in "La Bencdicite" the most
delightful picture of a child ever painted. This painting is
reproduced in color at the beginning of the volume and
like the other color reproductions, that of the "Holy
Family " by Michelangelo from the Uffizi and the painting
of the same subject by Rembrandt in St. Petersburg, are
excellently done and rival in quality those of far more
costly volumes. There are also twelve black and white
reproductions for each book.

The volume on Michelangelo begins with an analysis
of the "Holy Family," the only easel picture, and the only