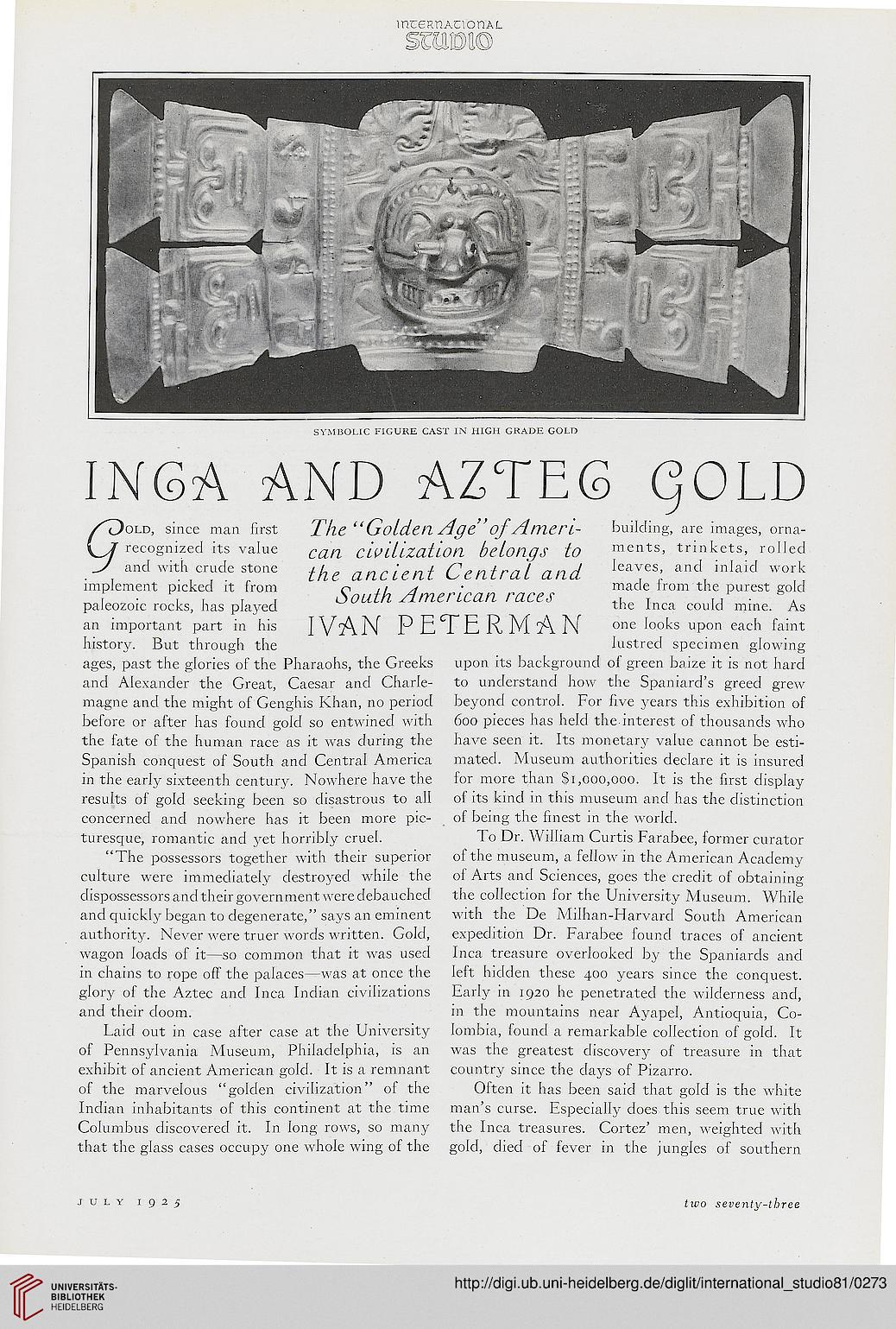 J and with crude stone the ancient Central and Iea7s; andt mIaid worT^

paleozoic rocks, has played ^OUttl American t ate.S the Inca could mine. As

an important part in his IVAN PETERMAN one looks upon each faint
history. But through the Iustred specimen glowing
ages, past the glories of the Pharaohs, the Greeks upon its background of green baize it is not hard
and Alexander the Great, Caesar and Charle- to understand how the Spaniard's greed grew
magne and the might of Genghis Khan, no period beyond control. For five years this exhibition of
before or after has found gold so entwined with 6oo pieces has held the.interest of thousands who
the fate of the human race as it was during the have seen it. Its monetary value cannot be esti-
Spanish conquest of South and Central America mated. Museum authorities declare it is insured
in the early sixteenth century. Nowhere have the for more than |i,000,000. It is the first display
results of gold seeking been so disastrous to all of its kind in this museum and has the distinction
concerned and nowhere has it been more pic- of being the finest in the world,
turesque, romantic and yet horribly cruel. To Dr. William Curtis Farabee, former curator
"The possessors together with their superior of the museum, a fellow in the American Academy
culture were immediately destroyed while the of Arts and Sciences, goes the credit of obtaining
dispossessors and their government were debauched the collection for the University Museum. While
and quickly began to degenerate," says an eminent with the De Milhan-Harvard South American
authority. Never were truer words written. Gold, expedition Dr. Farabee found traces of ancient
wagon loads of it—so common that it was used Inca treasure overlooked by the Spaniards and
in chains to rope off the palaces—was at once the left hidden these 400 years since the conquest,
glory of the Aztec and Inca Indian civilizations Early in 1920 he penetrated the wilderness and,
and their doom. in the mountains near Ayapel, Antioquia, Co-
Laid out in case after case at the University Iombia, found a remarkable collection of gold. It
of Pennsylvania Museum, Philadelphia, is an was the greatest discovery of treasure in that
exhibit of ancient American gold. It is a remnant country since the days of Pizarro.
of the marvelous "golden civilization" of the Often it has been said that gold is the white
Indian inhabitants of this continent at the time man's curse. Especially does this seem true with
Columbus discovered it. In long rows, so many the Inca treasures. Cortez' men, weighted with
that the glass cases occupy one whole wing of the gold, died of fever in the jungles of southern