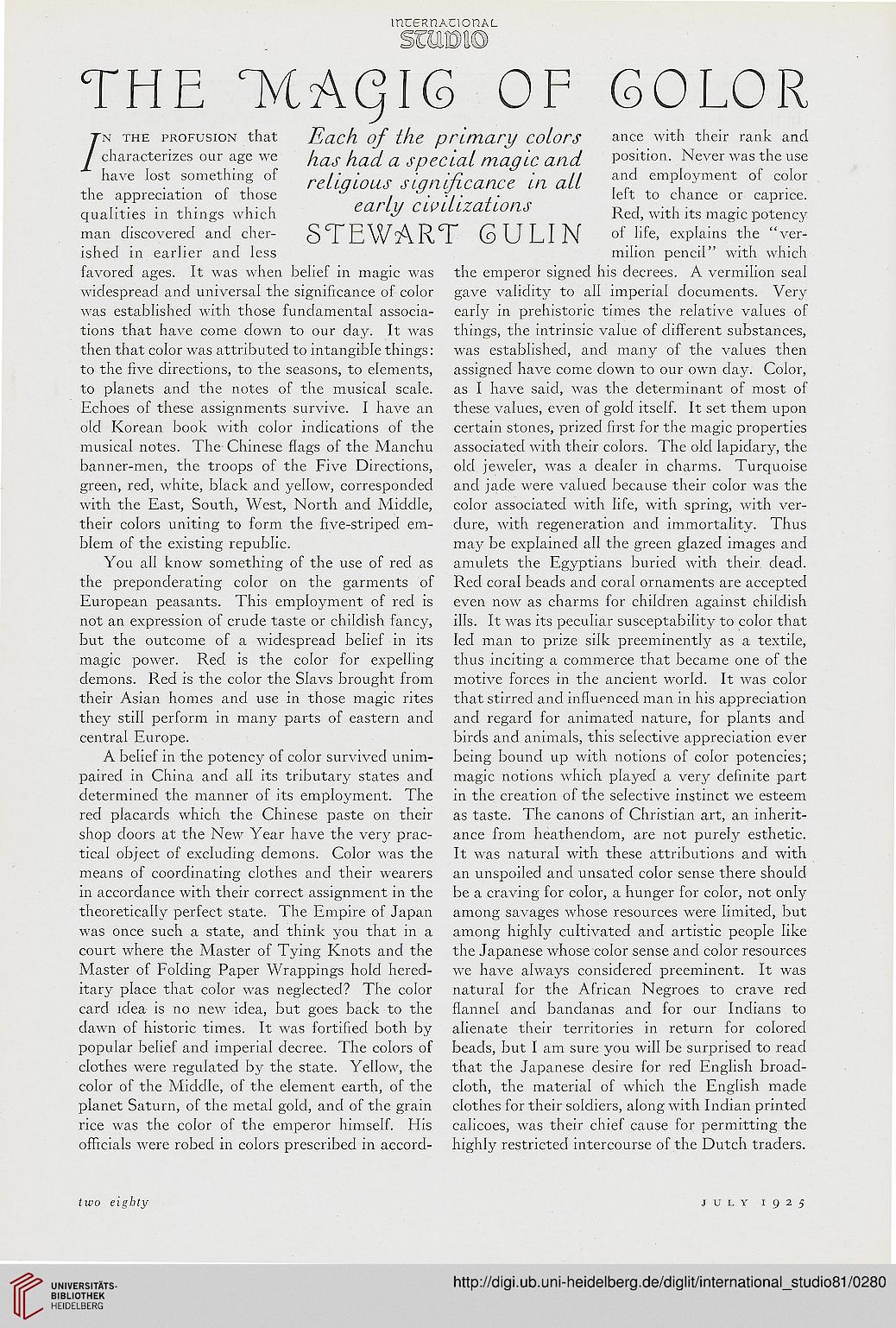 /n the profusion that Each of the primary Colors ance with their rank and
characterizes our age we nas naJ a Spec'Lal mag'iC and Position. Never was the use
have lost something of refLglous significance In all fn/ emPIoyment of c°Ior
the appreciation of those ' # /' / ' ^e''t t0 chance or caprice,
qualities in things which earlV ClVllLZatlOnS Red, with its magic potency
man discovered and cher- STEWART (SULIlSf °^ a^e' explains the "ver-
ished in earlier and less milion pencil" with which
favored ages. It was when belief in magic was the emperor signed his decrees. A vermilion seal
widespread and universal the significance of color gave validity to all imperial documents. Very
was established with those fundamental associa- early in prehistoric times the relative values of
tions that have come down to our day. It was things, the intrinsic value of different substances,
then that color was attributed to intangible things: was established, and many of the values then
to the five directions, to the seasons, to elements, assigned have come down to our own day. Color,
to planets and the notes of the musical scale. as I have said, wras the determinant of most of
Echoes of these assignments survive. I have an these values, even of gold itself. It set them upon
old Korean book with color indications of the certain stones, prized first for the magic properties
musical notes. The Chinese flags of the Manchu associated with their colors. The old lapidary, the
banner-men, the troops of the Five Directions, old jeweler, was a dealer in charms. Turquoise
green, red, white, black and yellow, corresponded and jade were valued because their color was the
with the East, South, West, North and Middle, color associated with life, with spring, with ver-
their colors uniting to form the five-striped em- dure, with regeneration and immortality. Thus
blem of the existing republic. may be explained all the green glazed images and
You all know something of the use of red as amulets the Egyptians buried with their, dead,
the preponderating color on the garments of Red coral beads and coral ornaments are accepted
European peasants. This employment of red is even now as charms for children against childish
not an expression of crude taste or childish fancy, ills. It was its peculiar susceptability to color that
but the outcome of a widespread belief in its led man to prize silk preeminently as a textile,
magic power. Red is the color for expelling thus inciting a commerce that became one of the
demons. Red is the color the Slavs brought from motive forces in the ancient world. It was color
their Asian homes and use in those magic rites that stirred and influenced man in his appreciation
they still perform in many parts of eastern and and regard for animated nature, for plants and
central Europe. birds and animals, this selective appreciation ever
A belief in the potency of color survived unim- being bound up with notions of color potencies;
paired in China and all its tributary states and magic notions which played a very definite part
determined the manner of its employment. The in the creation of the selective instinct we esteem
red placards which the Chinese paste on their as taste. The canons of Christian art, an inherit-
shop doors at the New Year have the very prac- ance from heathendom, are not purely esthetic,
tical object of excluding demons. Color was the It was natural with these attributions and with
means of coordinating clothes and their wearers an unspoiled and unsated color sense there should
in accordance with their correct assignment in the be a craving for color, a hunger for color, not only
theoretically perfect state. The Empire of Japan among savages whose resources were limited, but
was once such a state, and think you that in a among highly cultivated and artistic people like
court where the Master of Tying Knots and the the Japanese whose color sense and color resources
Master of Folding Paper Wrappings hold hered- we have always considered preeminent. It was
itary place that color was neglected? The color natural for the African Negroes to crave red
card idea is no new idea, but goes back to the flannel and bandanas and for our Indians to
dawn of historic times. It was fortified both by alienate their territories in return for colored
popular belief and imperial decree. The colors of beads, but I am sure you will be surprised to read
clothes were regulated by the state. Yellow, the that the Japanese desire for red English broad-
color of the Middle, of the element earth, of the cloth, the material of which the English made
planet Saturn, of the metal gold, and of the grain clothes for their soldiers, along with Indian printed
rice was the color of the emperor himself. His calicoes, was their chief cause for permitting the
officials were robeci in colors prescribed in accord- highly restricted intercourse of the Dutch traders.