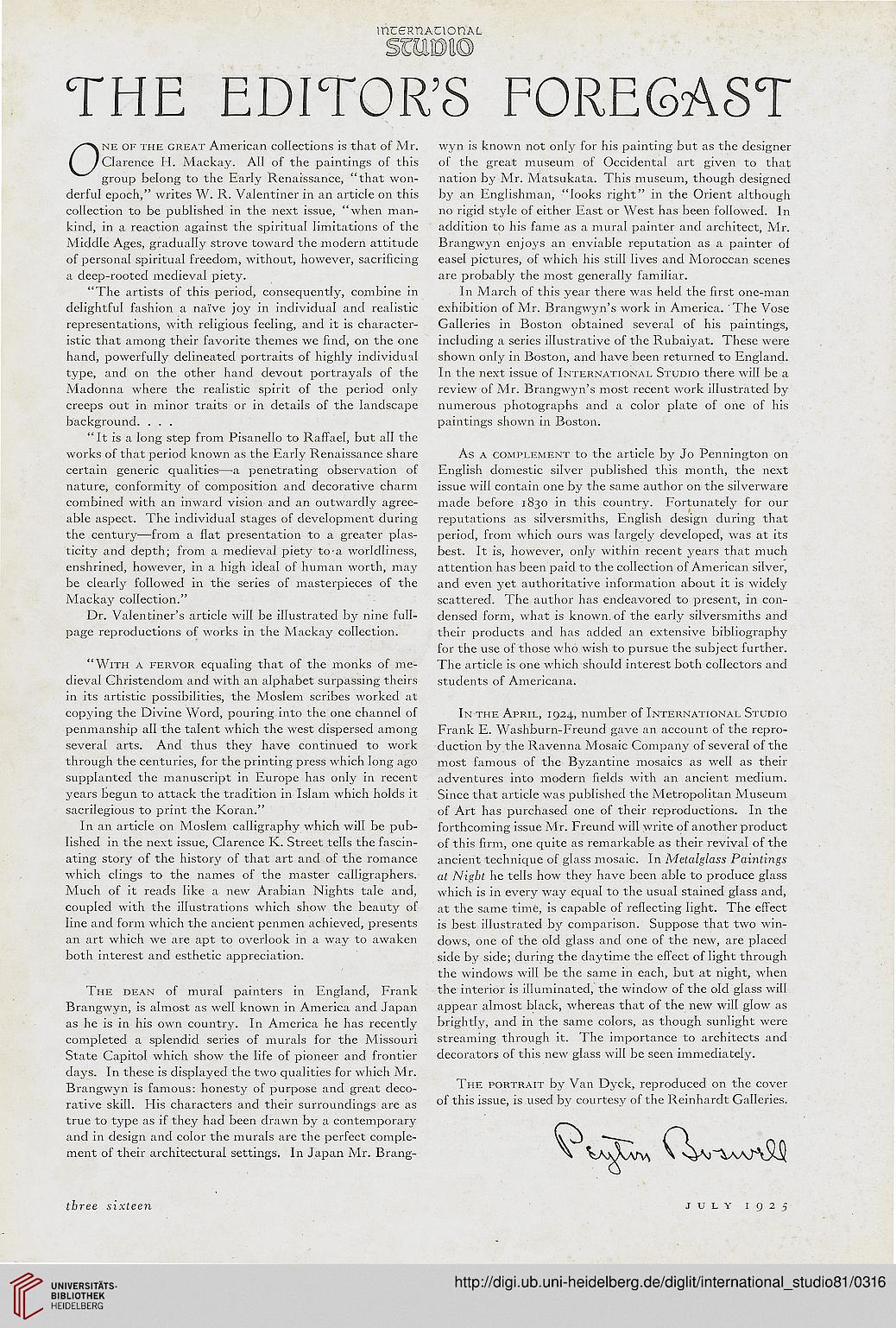 One of the great American collections is that of Mr. wyn is known not only for his painting but as the designer

Clarence H. Mackay. All of the paintings of this of the great museum of Occidental art given to that

group belong to the Early Renaissance, "that won- nation by Mr. Matsukata. This museum, though designed

derful epoch," writes W. R. Valentiner in an article on this by an Englishman, "looks right" in the Orient although

collection to be published in the next issue, "when man- no rigid style of either East or West has been followed. In

kind, in a reaction against the spiritual limitations of the addition to his fame as a mural painter and architect, Mr.

Middle Ages, gradually strove toward the modern attitude Brangwyn enjoys an enviable reputation as a painter of

of personal spiritual freedom, without, however, sacrificing easel pictures, of which his still lives and Moroccan scenes

a deep-rooted medieval piety. are probably the most generally familiar.

"The artists of this period, consequently, combine in In March of this year there was held the first one-man

delightful fashion a naive joy in individual and realistic exhibition of Mr. Brangwyn's work in America. ' The Vose

representations, with religious feeling, and it is character- Galleries in Boston obtained several of his paintings,

istic that among their favorite themes we find, on the one including a series illustrative of the Rubaiyat. These were

hand, powerfully delineated portraits of highly individual shown only in Boston, and have been returned to England,

type, and on the other hand devout portrayals of the In the next issue of International Studio there will be a

Madonna where the realistic spirit of the period only review of Mr. Brangwyn's most recent work illustrated by

"It is a long step from Pisanello to Raffael, but all the
works of that period known as the Early Renaissance share As a complement to the article by Jo Pennington on

nature, conformity of composition and decorative charm issue will contain one by the same author on the silverware

combined with an inward vision and an outwardly agree- made before 1830 in this country. Fortunately for our

able aspect. The individual stages of development during reputations as silversmiths, English design during that

the century—from a flat presentation to a greater plas- period, from which ours was largely developed, was at its

ticity and depth; from a medieval piety to-a worldliness, best. It is, however, only within recent years that much

enshrined, however, in a high ideal of human worth, may attention has been paid to the collection of American silver,

Mackay collection." scattered. The author has endeavored to present, in con-

Dr. Valentiner's article will be illustrated by nine full- densed form, what is known of the early silversmiths and

page reproductions of works in the Mackay collection. their products and has added an extensive bibliography

for the use of those who wish to pursue the subject further.

dieval Christendom and with an alphabet surpassing theirs students of Americana,
in its artistic possibilities, the Moslem scribes worked at

copying the Divine Word, pouring into the one channel of In the April, 1924, number of International Studio

penmanship all the talent which the west dispersed among Frank E. Washburn-Freund gave an account of the repro-

several arts. And thus they have continued to work duction by the Ravenna Mosaic Company of several of the

through the centuries, for the printing press which long ago most famous of the Byzantine mosaics as well as their

supplanted the manuscript in Europe has only in recent adventures into modern fields with an ancient medium,

sacrilegious to print the Koran." of Art has purchased one of their reproductions. In the

In an article on Moslem calligraphy which will be pub- forthcoming issue Mr. Freund will write of another product

Iished in the next issue, Clarence K. Street tells the fascin- of this firm, one quite as remarkable as their revival of the

ating story of the history of that art and of the romance ancient technique of glass mosaic. In Metalglass Paintings

which clings to the names of the master calligraphers. at Night he tells how they have been able to produce glass

Much of it reads like a new Arabian Nights tale and, which is in every way equal to the usual stained glass and,

coupled with the illustrations which show the beauty of at the same time, is capable of reflecting light. The effect

line and form which the ancient penmen achieved, presents is best illustrated by comparison. Suppose that two win-

an art which we are apt to overlook in a way to awaken dows, one of the old glass and one of the new, are placed

both interest and esthetic appreciation. side by side; during the daytime the effect of light through

the windows will be the same in each, but at night, when

The dean of mural painters in England, Frank the interior is illuminated, the window of the old glass will

Brangwyn, is almost as well known in America and Japan appear almost black, whereas that of the new will glow as

as he is in his own country. In America he has recently brightly, and in the same colors, as though sunlight were

completed a splendid series of murals for the Missouri streaming through it. The importance to architects and

State Capitol which show the life of pioneer and frontier decorators of this new glass will be seen immediately,
days. In these is displayed the two qualities for which Mr.

Brangwyn is famous: honesty of purpose and great deco- t.he portrait by Van Dyck, reproduced on the cover

rative skill. His characters and their surroundings are as
true to type as if they had been drawn by a contemporary

of this issue, is used bv courtesy of the Reinhardt Galleries.