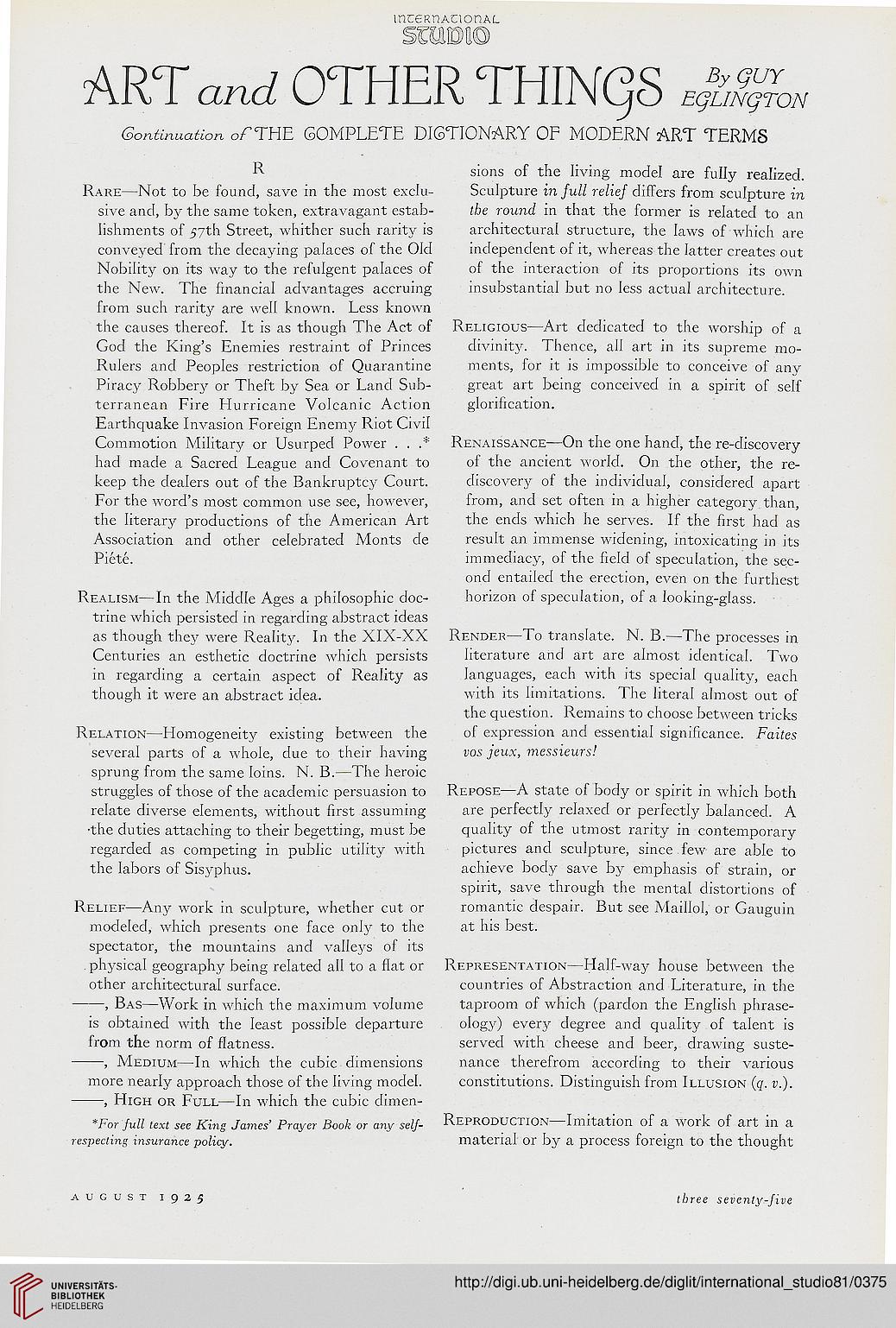 ART and OTHER THINGS EgUNQTC

Rare—Not to be found, save in the most exclu-
sive and, by the same token, extravagant estab-
lishments of 57th Street, whither such rarity is
conveyed from the decaying palaces of the Old
Nobility on its way to the refulgent palaces of
the New. The financial advantages accruing
from such rarity are well known. Less known
the causes thereof. It is as though The Act of
God the King's Enemies restraint of Princes
Rulers and Peoples restriction of Quarantine
Piracy Robbery or Theft by Sea or Land Sub-
terranean Fire Hurricane Volcanic Action
Earthquake Invasion Foreign Enemy Riot Civil
Commotion Military or Usurped Power . . .*
had made a Sacred League and Covenant to
keep the dealers out of tire Bankruptcy Court.
For the word's most common use see, however,
the literary productions of the American Art
Association and other celebrated Monts de
Piete.

Relation—Homogeneity existing between the
several parts of a whole, due to their having
sprung from the same loins. N. B.—The heroic
struggles of those of the academic persuasion to
relate diverse elements, without first assuming
•the duties attaching to their begetting, must be
regarded as competing in public utility with
the labors of Sisyphus.

Relief—Any work in sculpture, whether cut or
modeled, which presents one face only to the
spectator, the mountains and valleys of its
physical geography being related all to a flat or
other architectural surface.

-, Bas—Work in which the maximum volume

is obtained with the least possible departure
from the norm of flatness.

-, Medium—In which the cubic dimensions

more nearly approach those of the living model.

-, High or Full—In which the cubic dimen-

sions of the living model are fully realized.
Sculpture in full relief differs from sculpture in
the round in that the former is related to an
architectural structure, the laws of which are
independent of it, whereas the latter creates out
of the interaction of its proportions its own
insubstantial but no less actual architecture.

Religious—Art dedicated to the worship of a
divinity. Thence, all art in its supreme mo-
ments, for it is impossible to conceive of any
great art being conceived in a spirit of self
glorification.

Renaissance—On the one hand, the re-discovery
of the ancient world. On the other, the re-
discovery of the individual, considered apart
from, and set often in a higher category than,
the ends which he serves. If the first had as
result an immense widening, intoxicating in its
immediacy, of the field of speculation, the sec-
ond entailed the erection, even on the furthest
horizon of speculation, of a looking-glass.

Render—To translate. N. B.—The processes in
literature and art are almost identical. Two
languages, each with its special quality, each
with its limitations. The literal almost out of
the question. Remains to choose between tricks
of expression and essential significance. Faites
vos jeux, messieurs!

Repose—A state of body or spirit in which both
are perfectly relaxed or perfectly balanced. A
quality of the utmost rarity in contemporary
pictures and sculpture, since few are able to
achieve body save by emphasis of strain, or
spirit, save through the mental distortions of
romantic despair. But see Maillol, or Gauguin
at his best.

Representation—Half-way house between the
countries of Abstraction and Literature, in the
taproom of which (pardon the English phrase-
ology) every degree and quality of talent is
served with cheese and beer, drawing suste-
nance therefrom according to their various
constitutions. Distinguish from Illusion (q. v.).