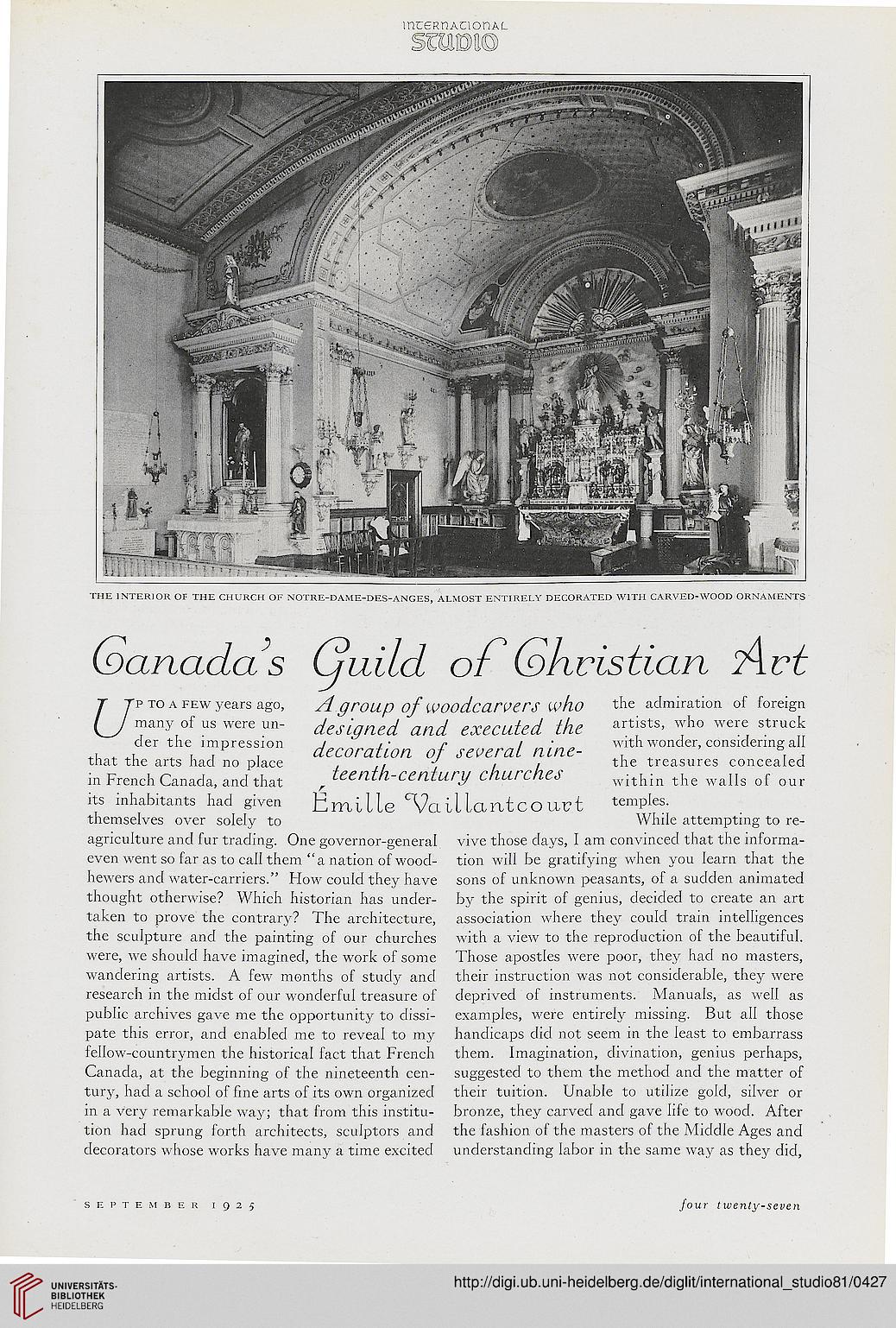 THE INTERIOR OF THE CHURCH OF NOTRE-DAME-DES-ANGES, ALMOST ENTIRELY DECORATED WITH CARVED-WOOD ORNAMENTS

J TP to a few years ago, A group of WOOcLcarverS wh.0 the admiration of foreign

der the impression decoration of reverat nine- with wonder, considering all
that the arts had no place i +1 j. I L treasures concealed
in French Canada, and that teenth-Century ClturcneS within the walls of our
its inhabitants had given £ mi lie "Va illdiatcO UV.t temples,
themselves over solely to While attempting to re-
agriculture and fur trading. One governor-general vive those days, I am convinced that the informa-
even went so far as to call them "a nation of wood- tion will be gratifying when you learn that the
hewers and water-carriers." How could they have sons of unknown peasants, of a sudden animated
thought otherwise? Which historian has under- by the spirit of genius, decided to create an art
taken to prove the contrary? The architecture, association where they could train intelligences
the sculpture and the painting of our churches with a view to the reproduction of the beautiful,
were, we should have imagined, the work of some Those apostles were poor, they had no masters,
wandering artists. A few months of study and their instruction was not considerable, they were
research in the midst of our wonderful treasure of deprived of instruments. Manuals, as well as
public archives gave me the opportunity to dissi- examples, were entirely missing. But all those
pate this error, and enabled me to reveal to my handicaps did not seem in the least to embarrass
fellow-countrymen the historical fact that French them. Imagination, divination, genius perhaps,
Canada, at the beginning of the nineteenth cen- suggested to them the method and the matter of
tury, had a school of fine arts of its own organized their tuition. Unable to utilize golci, silver or
in a very remarkable way; that from this institu- bronze, they carved and gave life to wood. After
tion had sprung forth architects, sculptors and the fashion of the masters of the Middle Ages and
decorators whose works have many a time excited understanding labor in the same way as they did,