Layard, Austen Henry
The monuments of Nineveh: from drawings made on the spot — London, 1849 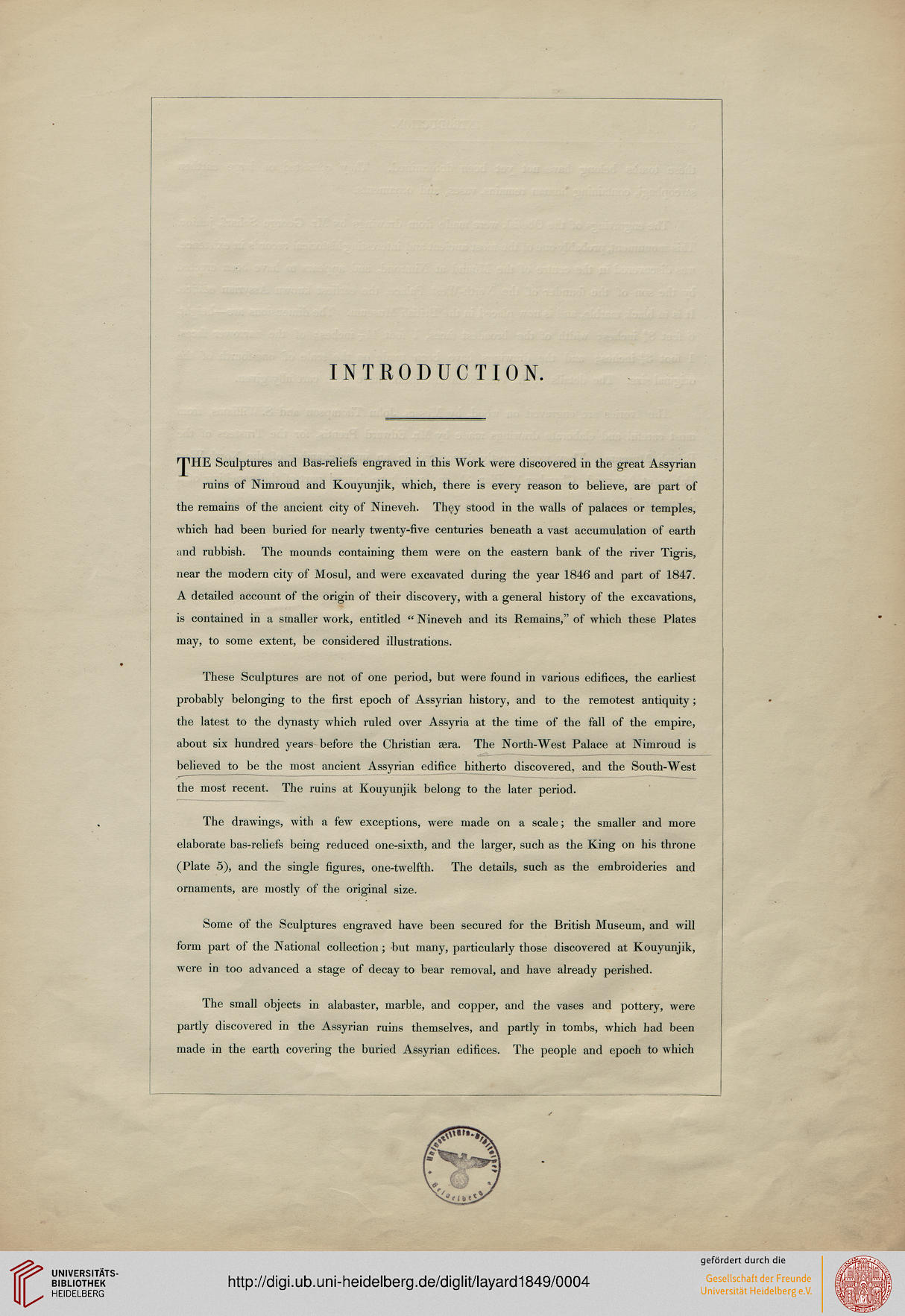 HP HE Sculptures and Bas-reliefs engraved in this Work were discovered in the great Assyrian
ruins of Nimroud and Kouyunjik, which, there is every reason to believe, are part of
the remains of the ancient city of Nineveh. They stood in the walls of palaces or temples,
which had been buried for nearly twenty-five centuries beneath a vast accumulation of earth
and rubbish. The mounds containing them were on the eastern bank of the river Tigris,
near the modern city of Mosul, and were excavated during the year 1846 and part of 1847.
A detailed account of the origin of their discovery, with a general history of the excavations,
is contained in a smaller work, entitled " Nineveh and its Remains," of which these Plates
may, to some extent, be considered illustrations.

These Sculptures are not of one period, but were found in various edifices, the earliest
probably belonging to the first epoch of Assyrian history, and to the remotest antiquity;
the latest to the dynasty which ruled over Assyria at the time of the fall of the empire,
about six hundred years before the Christian sera. The North-West Palace at Nimroud is
believed to be the most ancient Assyrian edifice hitherto discovered, and the South-West
the most recent. The ruins at Kouyunjik belong to the later period.

The drawings, with a few exceptions, were made on a scale; the smaller and more
elaborate bas-reliefs being reduced one-sixth, and the larger, such as the King on his throne
(Plate 5), and the single figures, one-twelfth. The details, such as the embroideries and
ornaments, are mostly of the original size.

Some of the Sculptures engraved have been secured for the British Museum, and will
form part of the National collection; but many, particularly those discovered at Kouyunjik,
were in too advanced a stage of decay to bear removal, and have already perished.

The small objects in alabaster, marble, and copper, and the vases and pottery, were
partly discovered in the Assyrian ruins themselves, and partly in tombs, which had been
made in the earth covering the buried Assyrian edifices. The people and epoch to which