Layard, Austen Henry [Editor]
A second series of the monuments of Nineveh: including bas-reliefs from the Palace of Sennacherib and bronzes from the ruins of Nimroud ; from drawings made on the spot, during a second expedition to Assyria — London, 1853 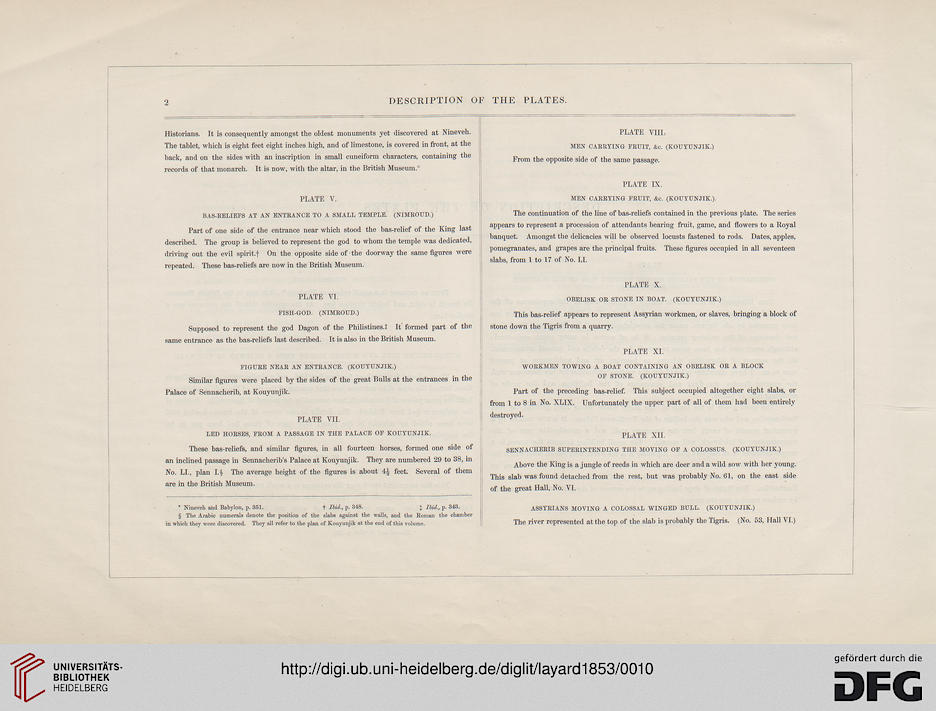 Historians. It is consequently amongst the oldest monuments yet discovered at Nineveh.
The tablet, which is eight feet eight inches high, and of limestone, is covered in front, at the
back, and on the sides with an inscription in small cuneiform characters, containing the
records of that monarch. It is now, with the altar, in the British Museum.*

PLATE V.
BAS-RELIEFS AT AN ENTRANCE TO A SMALL TEMPLE. (NIMBOUD.)

Part of one side of the entrance near which stood the bas-relief of the King last
described. The group is believed to represent the god to whom the temple was dedicated,
driving out the evil spirit.f On the opposite side of the doorway the same figures were
repeated. These bas-reliefs are now in the British Museum.

Supposed to represent the god Dagon of the Philistines.! It formed part of the
same entrance as the bas-reliefs last described. It is also in the British Museum.

FIGUBE NEAE AN ENTEANCE. (KOUYUNJIK.)
Similar figures were placed by the sides of the great Bulls at the entrances in the
Palace of Sennacherib, at Kouyunjik.

These bas-reliefs, and similar figures, in all fourteen horses, formed one side of
an inclined passage in Sennacherib's Palace at Kouyunjik. They are numbered 29 to 38, in
No. LI., plan I.§ The average height of the figures is about 4^ feet. Several of them
are in the British Museum.

§ The Arabic numerals denote the position of the slabs against the walls, and the Eoman the chamber
in which they were discovered. They all refer to the plan of Kouyunjik at the end of this volume.

The continuation of the line of bas-reliefs contained in the previous plate. The series
appears to represent a procession of attendants bearing fruit, game, and flowers to a Royal
banquet. Amongst the delicacies will be observed locusts fastened to rods. Dates, apples,
pomegranates, and grapes are the principal fruits. These figures occupied in all seventeen
slabs, from 1 to 17 of No. LI.

This bas-relief appears to represent Assyrian workmen, or slaves, bringing a block of
stone down the Tigris from a quarry.

WOEKMEN TOWING A BOAT CONTAINING AN OBELISK OE A BLOCK

Part of the preceding bas-relief. This subject occupied altogether eight slabs, or
from 1 to 8 in No. XLIX. Unfortunately the upper part of all of them had been entirely
destroyed;

Above the King is a jungle of reeds in which are deer and a wild sow with her young.
This slab was found detached from the rest, but was probably No. 61, on the east side
of the great Hall, No. VI.

ASSYEIANS MOVING A COLOSSAL WINGED BULL. (KOUYUNJIK.)
The river represented at the top of the slab is probably the Tigris. (No. 53, Hall VI.)