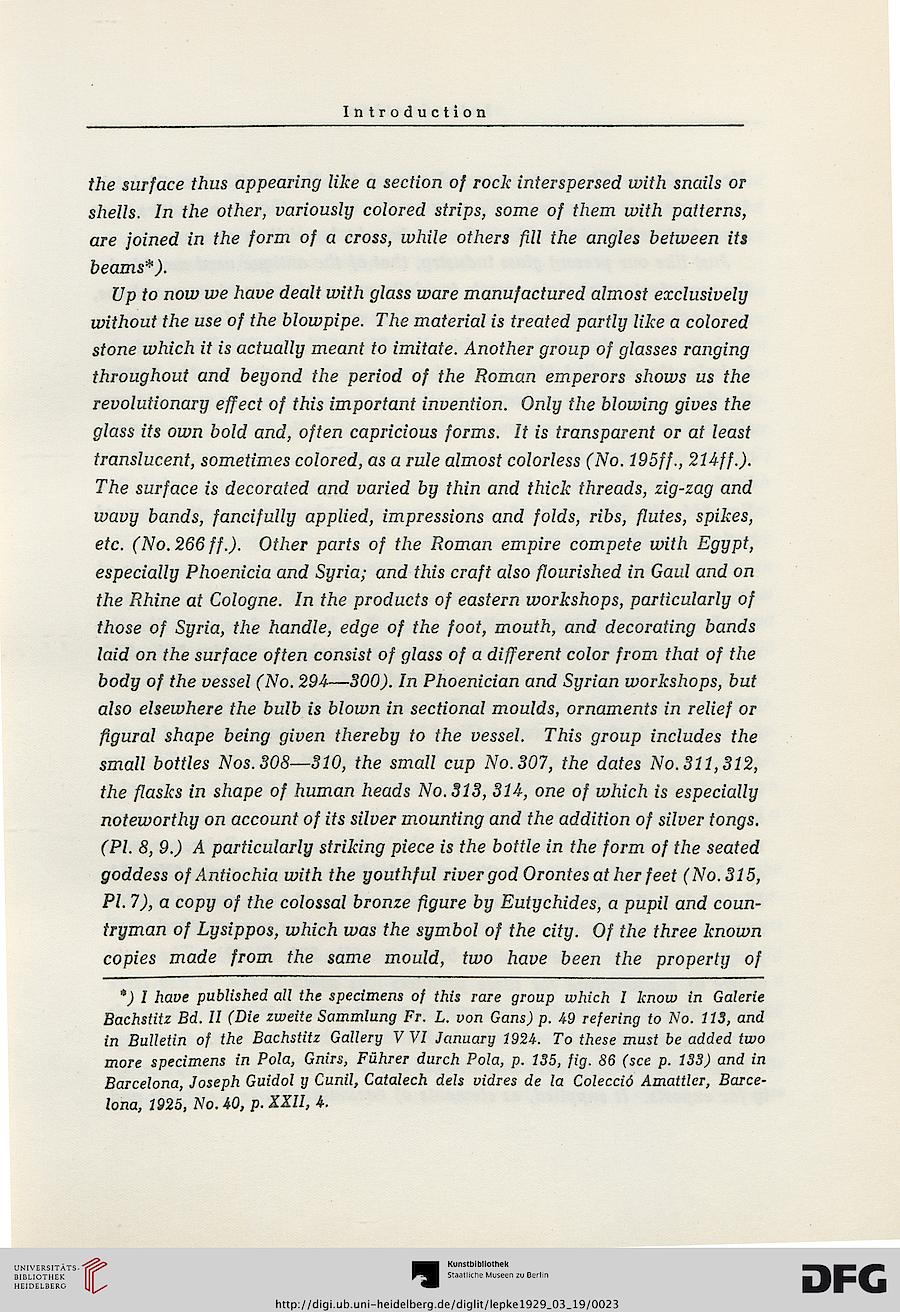 the surface thus appearing like a section of rock interspersed with snails or
shells. In the other, variously colored strips, some of them with patterns,
are joined in the form of a cross, while others fill the angles between its
beams*).

Up to now we have dealt with glass ware manufactured almost exclusively
without the use of the blowpipe. The material is treated partly like a colored
stone which it is actually meant to imitate. Another group of glasses ranging
throughout and beyond the period of the Roman emperors shows us the
revolutionary effect of this important invention. Only the blowing gives the
glass its own bold and, often capricious forms. It is transparent or at least
translucent, sometimes colored, as a rule almost colorless (No. 195ff., 2Hff.).
The surface is decorated and varied by thin and thick threads, zig-zag and
wavy bands, fancifully applied, impressions and folds, ribs, flutes, spikes,
etc. (No.266 ff.). Other parts of the Roman empire compete with Egypt,
especially Phoenicia and Syria; and this craft also flourished in Gaul and on
the Rhine at Cologne. In the products of eastern workshops, particularly of
those of Syria, the handle, edge of the foot, mouth, and decorating bands
laid on the surface often consist of glass of a different color from that of the
body of the vessel (No. 294-—300). In Phoenician and Syrian workshops, but
also elsewhere the bulb is blown in sectional moulds, ornaments in relief or
figural shape being given thereby to the vessel. This group includes the
small bottles Nos.308—310, the small cup No. 307, the dates No. 311,312,
the flasks in shape of human heads No. 313, 3H, one of which is especially
noteworthy on account of its silver mounting and the addition of silver tongs.
(PL 8, 9.) A particularly striking piece is the bottle in the form of the seated
goddess of Antiochia with the youthful river god Orontes at her feet (No.315,
PL 7), a copy of the colossal bronze figure by Eutychides, a pupil and coun-
tryman of Lysippos, which was the symbol of the city. Of the three known
copies made from the same mould, two have been the property of