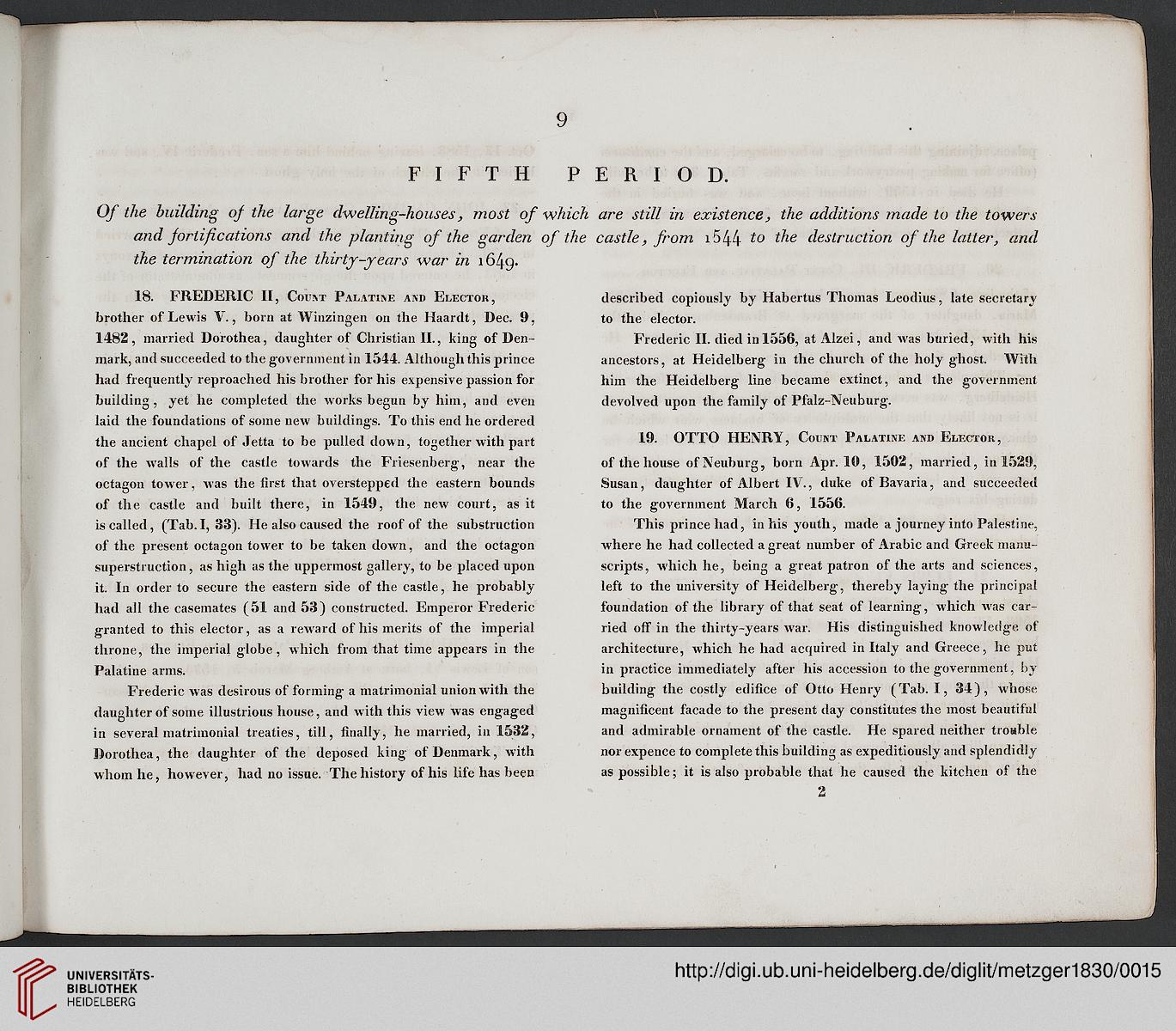 Of the building of the large dwelling-houses, most of which are still in existence, the additions made to the towers
and fortifications and the planting of the garden of the castle, from 1544 t0 the destruction of the latter, and
the termination of the thirty-years war in

18. FREDERIC II, Count Palatine and Elector,
brother of Lewis V., born at Winzingen on the Haardt, Dec. 9,
1482, married Dorothea, daughter of Christian II., king of Den-
mark, and succeeded to the government in 1544. Although this prince
had frequently reproached his brother for his expensive passion for
building, yet he completed the works begun by him, and even
laid the foundations of some new building's. To this end he ordered
the ancient chapel of Jetta to be pulled down, together with part
of the walls of the castle towards the Friesenberg, near the
octagon tower, was the first that overstepped the eastern bounds
of the castle and built there, in 1549, the new court, as it
is called, (Tab. I, 33). He also caused the roof of the substruction
of the present octagon tower to be taken down, and the octagon
superstruction, as high as the uppermost gallery, to be placed upon
it. In order to secure the eastern side of the castle, he probably
had all the casemates (51 and 53) constructed. Emperor Frederic
granted to this elector, as a reward of his merits of the imperial
throne, the imperial globe, which from that time appears in the
Palatine arms.

Frederic was desirous of forming a matrimonial union with the
daughter of some illustrious house, and with this view was engaged
in several matrimonial treaties, till, finally, he married, in 1532,
Dorothea, the daughter of the deposed king of Denmark, with
whom he, however, had no issue. The history of his life has been

Frederic II. died in 1556, at Alzei, and was buried, with his
ancestors, at Heidelberg in the church of the holy ghost. With
him the Heidelberg line became extinct, and the government
devolved upon the family of Pfalz-Neuburg.

This prince had, in his youth, made a journey into Palestine,
where he had collected a great number of Arabic and Greek manu-
scripts, Avhich he, being a great patron of the arts and sciences,
left to the university of Heidelberg, thereby laying the principal
foundation of the library of that seat of learning, which was car-
ried off in the thirty-years war. His distinguished knowledge of
architecture, which he had acquired in Italy and Greece, he put
in practice immediately after his accession to the government, by
building the costly edifice of Otto Henry (Tab. I, 34), whose
magnificent facade to the present day constitutes the most beautiful
and admirable ornament of the castle. He spared neither trouble
nor expence to complete this building as expeditiously and splendidly
as possible; it is also probable that he caused the kitchen of the