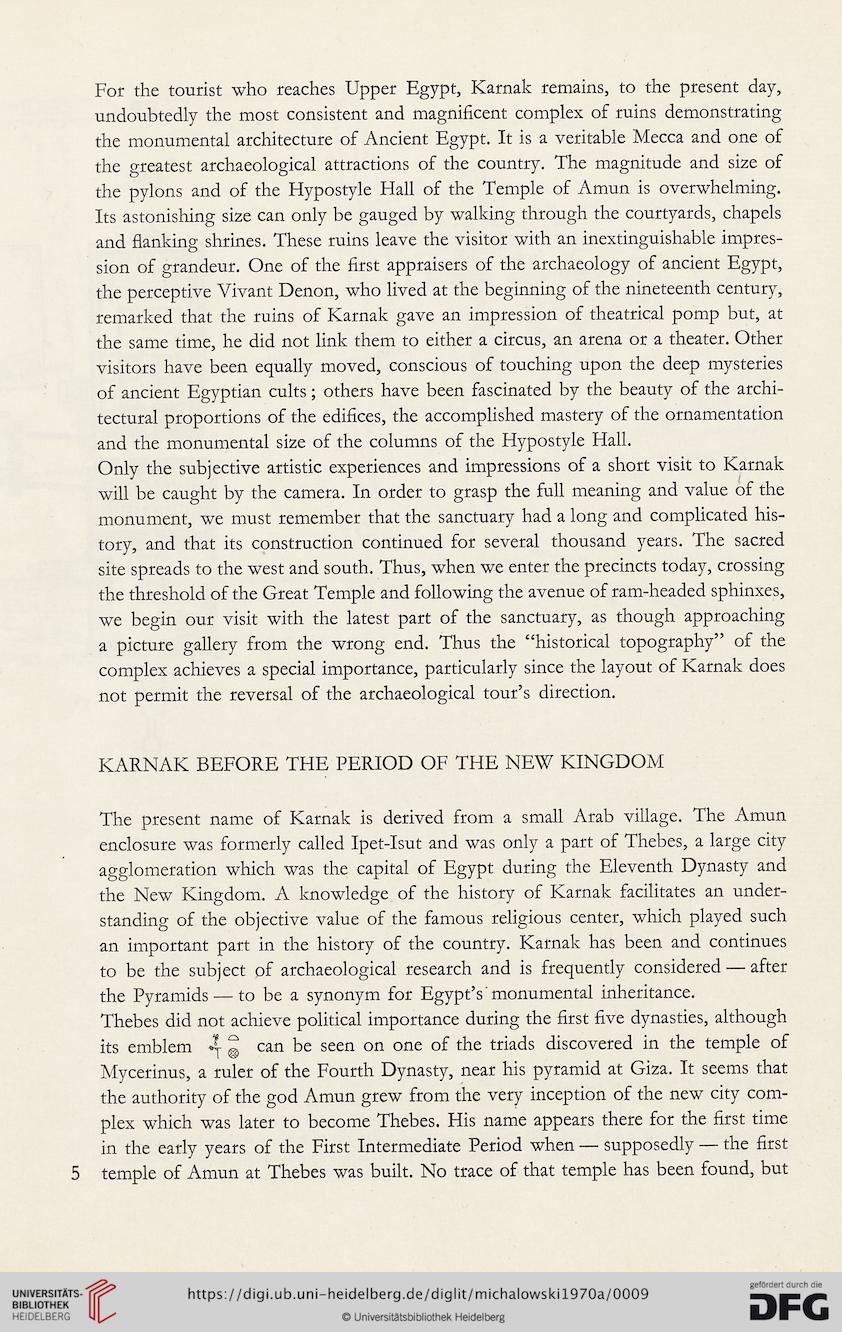 Information about OCR text
For the tourist who reaches Upper Egypt, Karnak remains, to the present day,
undoubtedly the most consistent and magnificent complex of ruins demonstrating
the monumental architecture of Ancient Egypt. It is a veritable Mecca and one of
the greatest archaeological attractions of the country. The magnitude and size of
the pylons and of the Hypostyle Hall of the Temple of Amun is overwhelming.
Its astonishing size can only be gauged by walking through the courtyards, chapels
and flanking shrines. These ruins leave the visitor with an inextinguishable impres-
sion of grandeur. One of the first appraisers of the archaeology of ancient Egypt,
the perceptive Vivant Denon, who lived at the beginning of the nineteenth century,
remarked that the ruins of Karnak gave an impression of theatrical pomp but, at
the same time, he did not link them to either a circus, an arena or a theater. Other
visitors have been equally moved, conscious of touching upon the deep mysteries
of ancient Egyptian cults; others have been fascinated by the beauty of the archi-
tectural proportions of the edifices, the accomplished mastery of the ornamentation
and the monumental size of the columns of the Hypostyle Hall.
Only the subjective artistic experiences and impressions of a short visit to Karnak
will be caught by the camera. In order to grasp the full meaning and value of the
monument, we must remember that the sanctuary had a long and complicated his-
tory, and that its construction continued for several thousand years. The sacred
site spreads to the west and south. Thus, when we enter the precincts today, crossing
the threshold of the Great Temple and following the avenue of ram-headed sphinxes,
we begin our visit with the latest part of the sanctuary, as though approaching
a picture gallery from the wrong end. Thus the “historical topography” of the
complex achieves a special importance, particularly since the layout of Karnak does
not permit the reversal of the archaeological tour’s direction.

KARNAK BEFORE THE PERIOD OF THE NEW KINGDOM

The present name of Karnak is derived from a small Arab village. The Amun
enclosure was formerly called Ipet-Isut and was only a part of Thebes, a large city
agglomeration which was the capital of Egypt during the Eleventh Dynasty and
the New Kingdom. A knowledge of the history of Karnak facilitates an under-
standing of the objective value of the famous religious center, which played such
an important part in the history of the country. Karnak has been and continues
to be the subject of archaeological research and is frequently considered — after
the Pyramids — to be a synonym for Egypt’s'monumental inheritance.
Thebes did not achieve political importance during the first five dynasties, although
its emblem ® can be seen on one of the triads discovered in the temple of
Mycerinus, a ruler of the Fourth Dynasty, near his pyramid at Giza. It seems that
the authority of the god Amun grew from the very inception of the new city com-
plex which was later to become Thebes. His name appears there for the first time
in the early years of the First Intermediate Period when — supposedly — the first
5 temple of Amun at Thebes was built. No trace of that temple has been found, but