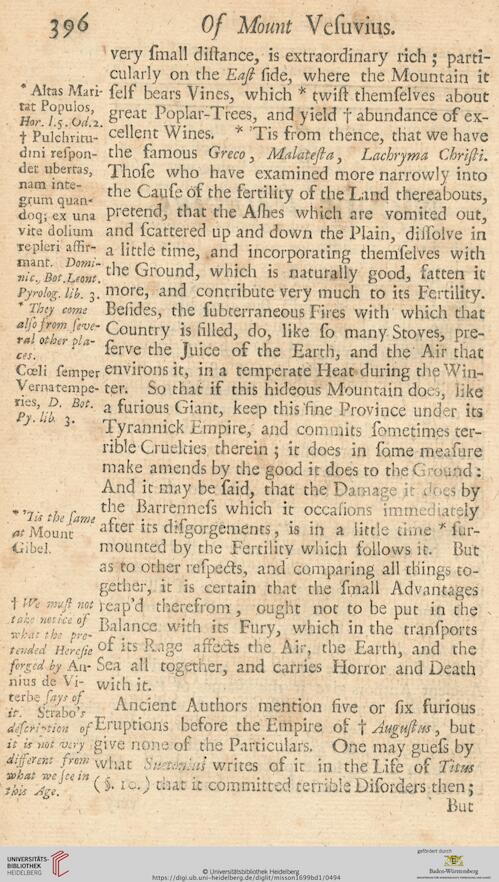 Information about OCR text
396 Of Mount Vesuvius.
very small distance, is extraordinary rich ; parti-
cularly on the East side, where the Mountain it
* Altas Mari- self bears Vines, which * twist themselves about
8reat Poplar-Trees, and yield s abundance of ex-
t Pulcliriru-’ cellent Wines. * ’Tis from thence, that we have
dini respon- the famous Greco , Malatesia, Lachryma Chrifii.
det ubertas, Those who have examined more narrowly into
gruni "uan- t^e Cause of the fertility of the Land thereabouts,
doqTex una pretend, that the Ashes which are vomited out,
vite dolium and scattered up and down the Plain, dilsolve in
repleri affir- a little time, .and incorporating themselves with
the Ground, which is naturally good, fatten it
pyrolog Jib. 3. more, and contribute very much to its Fertility.
* They come Besides, the subterraneous Fires with which that
al;ofrom {eve- Country is filled, do, like so many Stoves, pre-
w. °Z ‘ ^erve c'ie Juice of the Earth, and the Air that
Coeli semner environs it, in a temperate Heat during the Win-
Vernatempe- ter. So that if this hideous Mountain does, like
Bat' a furious Giant, keep this'fine Province under its
y- ‘ ■ 3- Tyrannick Empire; and commits sometimes ter-
rible Cruelties. therein ; it does in same measure
make amends by the good it does to the Ground :
And it may be said, that the Damage it Joes by
r^e ®arrenncss which it occasions immediately
ot Mount “ a^ter *ts disgorgements, is in a little time * sur-
tiibel. mounted by the Fertility which follows it. But
as to other respeds, and comparing all things to-
gether, it is certain that the small Advantages
1 reap’d therefrom , ought not to be put in the
notice 0/ Ba]anCe with its Fury, which in the transports
t^eci irs Rage affects the Air, the Earth, and the
sorged by An- Sea all together, and carries Horror and Death
nius de Vi- with it.
**rll^raboC Ancient Authors mention five or six furious
deserhtim osEruptions before the Empire of t Auguftm, but
it is not wy give none of the Particulars. One may guess by
different srom what Snettinius writes of it in the Life of Titres
what we sem Ic. Ychat it committed terrible Disorders then;
' But