Monro, Alexander
Observations on the structure and functions of the nervous system: illustrated with tables — Edinburgh [u.a.], 1783 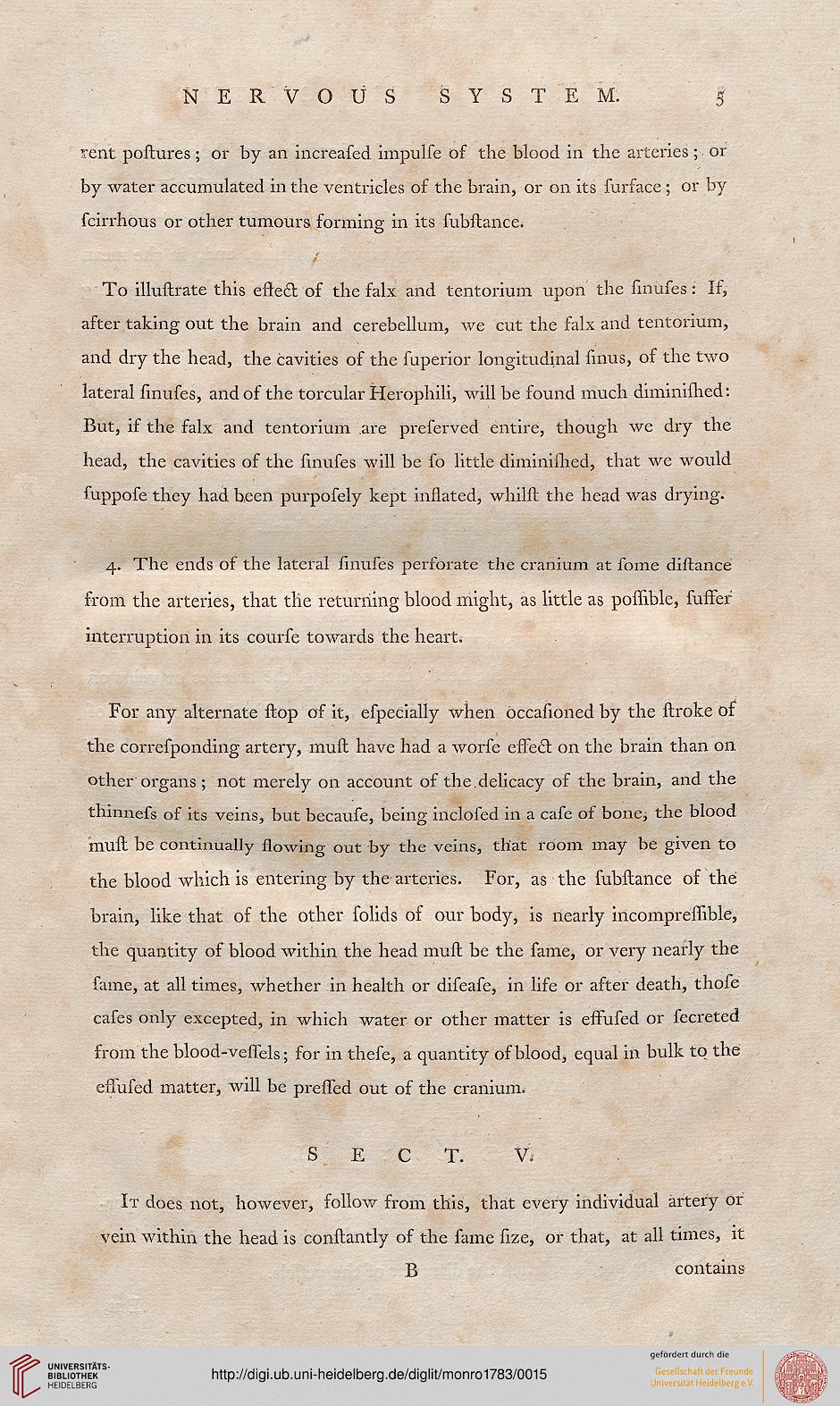 Information about OCR text
NERVOUS SYSTEM. 5
rent postures; or by an increased impulse of the blood in the arteries ; or
by water accumulated in the ventricles of the brain, or on its surface ; or by
scirrhous or other tumours forming in its substance.
/•
To illustrate this eftecT: of the falx and tentorium upon the smuses: If,
after taking out the brain and cerebellum, we cut the falx and tentorium,
and dry the head, the cavities of the superior longitudinal hnus, of the two
lateral stnuses, and of the torcular Herophili, will be found much diminimed:
But, if the falx and tentorium are preserved entire, though we dry the
head, the cavities of the sinuses will be so little diminilhed, that we would
suppose they had been purposely kept inssated, whilst the head was drying.
4. The ends of the lateral sinuses perforate the cranium at some distance
from the arteries, that the returning blood might, as little as pomble, suffef
interruption in its course towards the heart.
For any alternate stop of it, especially when bccasioned by the stroke of
the corresponding artery, must have had a worse effect on the brain than on
other organs; not merely on account of the.delicacy of the brain, and the
thinness of its veins, but because, being inclosed in a case of bone^ the blood
must be continually ssowing out by the veins, that room may be given to
the blood which is entering by the arteries. For, as the substance of the
brain, like that of the other solids of our body, is nearly incompressible,
the quantity of blood within the head must be the same, or very nearly the
same, at all times, whether in health or disease, in life or after death, those
cases only excepted, in which water or other matter is eflfused or secreted
from the blood-vessels; for in these, a quantity of blood* equal in bulk to the
effused matter, will be pressed out of the cranium.
SECT. Vi
It does not, however, follow from this, that every individual artery or
vein within the head is constantly of the same size, or that, at all times, it
B contains