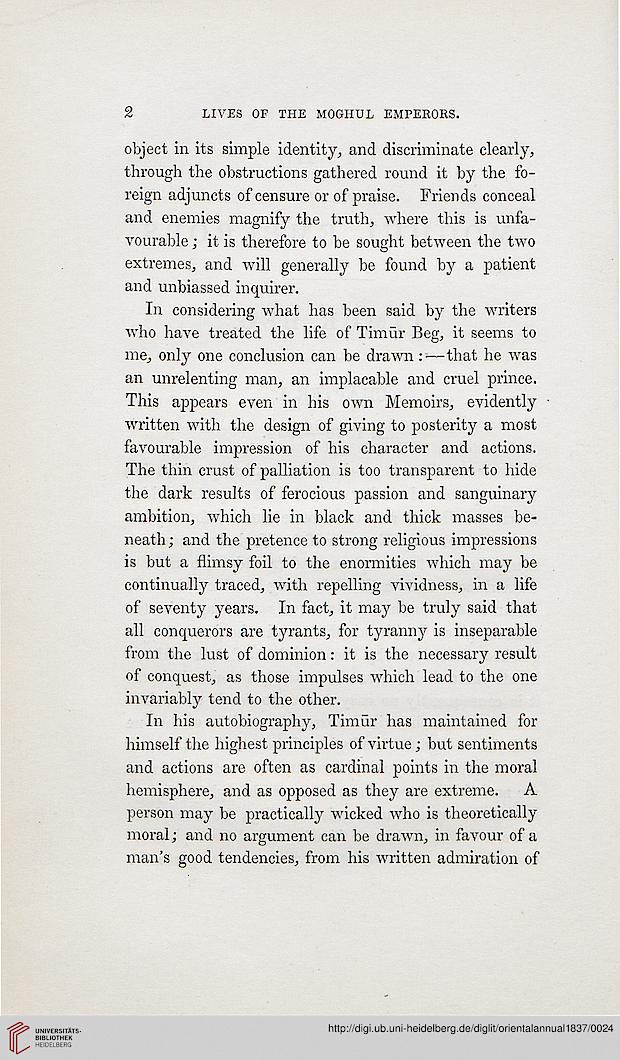 Information about OCR text
% LIVES OF THE MOGHUL EMPERORS.

object in its simple identity, and discriminate clearly,
through the obstructions gathered round it by the fo-
reign adjuncts of censure or of praise. Friends conceal
and enemies magnify the truth, where this is unfa-
vourable ; it is therefore to be sought between the two
extremes, and will generally be found by a patient
and unbiassed inquirer.

In considering what has been said by the writers
who have treated the life of Timur Beg, it seems to
me, only one conclusion can be drawn:—that he was
an unrelenting man, an implacable and cruel prince.
This appears even in his own Memoirs, evidently
written with the design of giving to posterity a most
favourable impression of his character and actions.
The thin crust of palliation is too transparent to hide
the dark results of ferocious passion and sanguinary
ambition, which lie in black and thick masses be-
neath ; and the pretence to strong religious impressions
is but a flimsy foil to the enormities which may be
continually traced, with repelling vividness, in a life
of seventy years. In fact, it may be truly said that
all conquerors are tyrants, for tyranny is inseparable
from the lust of dominion: it is the necessary result
of conquest, as those impulses which lead to the one
invariably tend to the other.

In his autobiography, Timur has maintained for
himself the highest principles of virtue; but sentiments
and actions are often as cardinal points in the moral
hemisphere, and as opposed as they are extreme. A
person may be practically wicked who is theoretically
moral; and no argument can be drawn, in favour of a
man's good tendencies, from his written admiration of