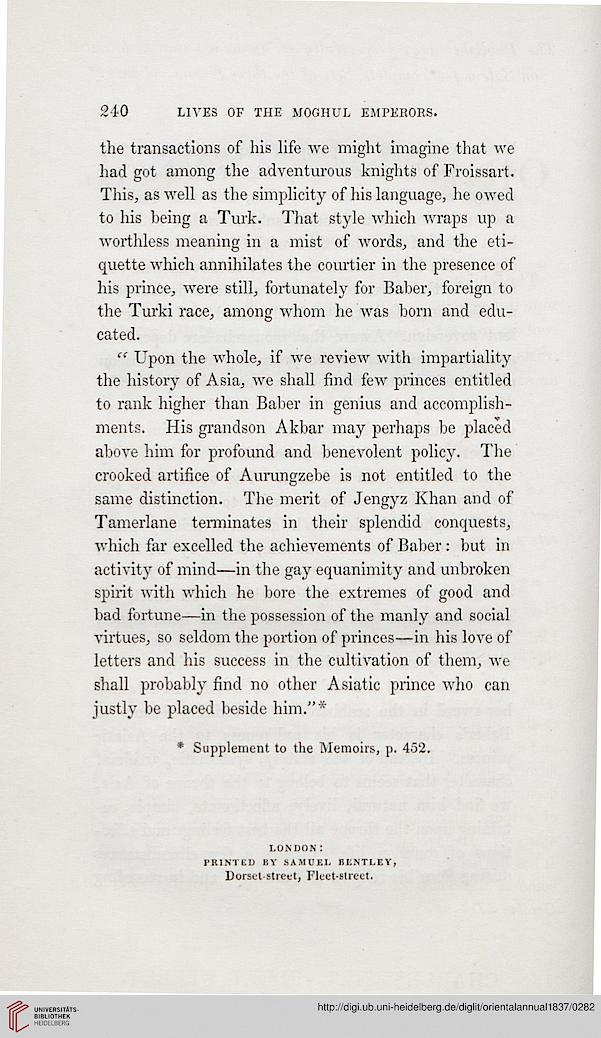 LIVES OF THE MOGHUL EMPERORS.

the transactions of his life we might imagine that we
had got among the adventurous knights of Froissart.
This, as well as the simplicity of his language, he owed
to his being a Turk. That style which wraps up a
worthless meaning in a mist of words, and the eti-
quette which annihilates the courtier in the presence of
his prince, were still, fortunately for Baber, foreign to
the Turki race, among whom he was born and edu-
cated.

" Upon the whole, if we review with impartiality
the history of Asia, we shall find few princes entitled
to rank higher than Baber in genius and accomplish-
ments. His grandson Akbar may perhaps be placed
above him for profound and benevolent policy. The
crooked artifice of Aurungzebe is not entitled to the
same distinction. The merit of Jengyz Khan and of
Tamerlane terminates in their splendid conquests,
which far excelled the achievements of Baber: but in
activity of mind—in the gay equanimity and unbroken
spirit with which he bore the extremes of good and
bad fortune—in the possession of the manly and social
virtues, so seldom the portion of princes—in his love of
letters and his success in the cultivation of them, we
shall probably find no other Asiatic prince who can
justly be placed beside him."*