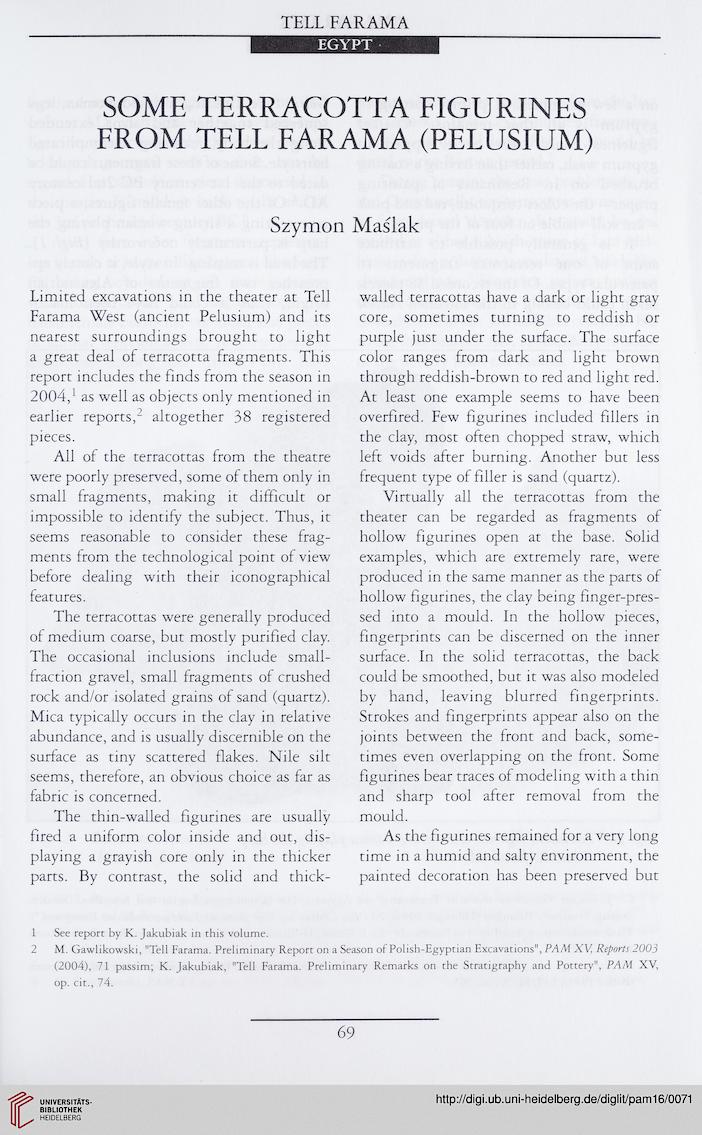 Limited excavations in the theater at Tell
Farama West (ancient Pelusium) and its
nearest surroundings brought to light
a great deal of terracotta fragments. This
report includes the finds from the season in
2004,1 as well as objects only mentioned in
earlier reports,2 altogether 38 registered
pieces.
All of the terracottas from the theatre
were poorly preserved, some of them only in
small fragments, making it difficult or
impossible to identify the subject. Thus, it
seems reasonable to consider these frag-
ments from the technological point of view
before dealing with their iconographical
features.
The terracottas were generally produced
of medium coarse, but mostly purified clay.
The occasional inclusions include small-
fraction gravel, small fragments of crushed
rock and/or isolated grains of sand (quartz).
Mica typically occurs in the clay in relative
abundance, and is usually discernible on the
surface as tiny scattered flakes. Nile silt
seems, therefore, an obvious choice as far as
fabric is concerned.
The thin-walled figurines are usually
fired a uniform color inside and out, dis-
playing a grayish core only in the thicker
parts. By contrast, the solid and thick-

walled terracottas have a dark or light gray
core, sometimes turning to reddish or
purple just under the surface. The surface
color ranges from dark and light brown
through reddish-brown to red and light red.
At least one example seems to have been
overfired. Few figurines included fillers in
the clay, most often chopped straw, which
left voids after burning. Another but less
frequent type of filler is sand (quartz).
Virtually all the terracottas from the
theater can be regarded as fragments of
hollow figurines open at the base. Solid
examples, which are extremely rare, were
produced in the same manner as the parts of
hollow figurines, the clay being finger-pres-
sed into a mould. In the hollow pieces,
fingerprints can be discerned on the inner
surface. In the solid terracottas, the back
could be smoothed, but it was also modeled
by hand, leaving blurred fingerprints.
Strokes and fingerprints appear also on the
joints between the front and back, some-
times even overlapping on the front. Some
figurines bear traces of modeling with a thin
and sharp tool after removal from the
mould.
As the figurines remained for a very long
time in a humid and salty environment, the
painted decoration has been preserved but