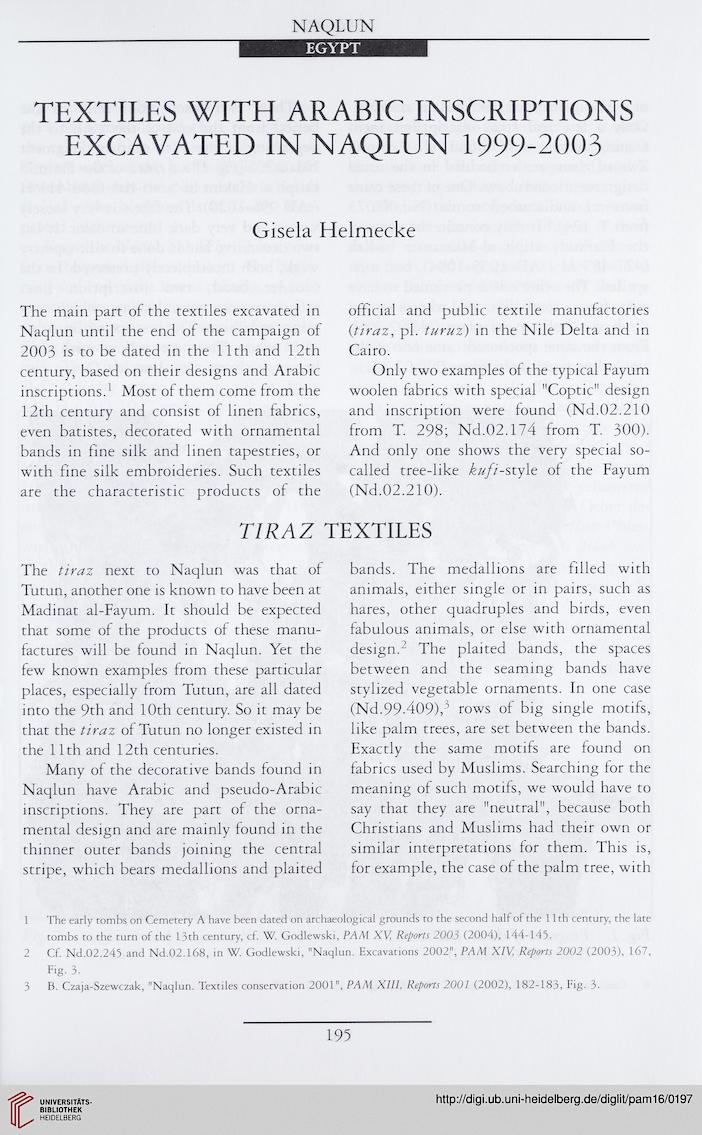 The main part of the textiles excavated in
Naqlun until the end of the campaign of
2003 is to be dated in the 11th and 12th
century, based on their designs and Arabic
inscriptions.1 Most of them come from the
12th century and consist of linen fabrics,
even batistes, decorated with ornamental
bands in fine silk and linen tapestries, or
with fine silk embroideries. Such textiles
are the characteristic products of the

official and public textile manufactories
(tiraz, pi. turuz) in the Nile Delta and in
Cairo.
Only two examples of the typical Fayum
woolen fabrics with special "Coptic" design
and inscription were found (Nd.02.210
from T. 298; Nd.02.174 from T. 300).
And only one shows the very special so-
called tree-like kufi-style of the Fayum
(Nd.02.210).

The tiraz next to Naqlun was that of
Tutun, another one is known to have been at
Madinat al-Fayum. It should be expected
that some of the products of these manu-
factures will be found in Naqlun. Yet the
few known examples from these particular
places, especially from Tutun, are all dated
into the 9th and 10th century. So it may be
that the tiraz of Tutun no longer existed in
the 11th and 12th centuries.
Many of the decorative bands found in
Naqlun have Arabic and pseudo-Arabic
inscriptions. They are part of the orna-
mental design and are mainly found in the
thinner outer bands joining the central
stripe, which bears medallions and plaited

bands. The medallions are filled with
animals, either single or in pairs, such as
hares, other quadruples and birds, even
fabulous animals, or else with ornamental
design.2 3 The plaited bands, the spaces
between and the seaming bands have
stylized vegetable ornaments. In one case
(Nd.99-409),1 rows of big single motifs,
like palm trees, are set between the bands.
Exactly the same motifs are found on
fabrics used by Muslims. Searching for the
meaning of such motifs, we would have to
say that they are "neutral", because both
Christians and Muslims had their own or
similar interpretations for them. This is,
for example, the case of the palm tree, with