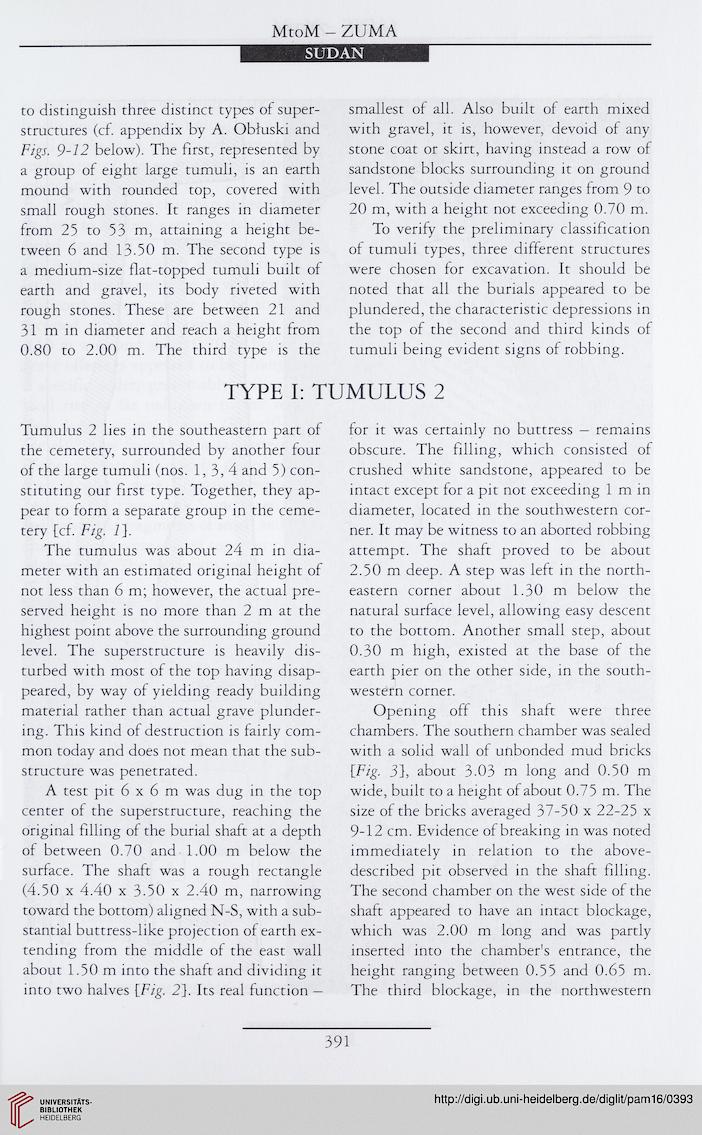 to distinguish three distinct types of super-
structures (cf. appendix by A. Obluski and
Figs. 9-12 below). The first, represented by
a group of eight large tumuli, is an earth
mound with rounded top, covered with
small rough stones. It ranges in diameter
from 25 to 53 m, attaining a height be-
tween 6 and 13.50 m. The second type is
a medium-size flat-topped tumuli built of
earth and gravel, its body riveted with
rough stones. These are between 21 and
31 m in diameter and reach a height from
0.80 to 2.00 m. The third type is the

smallest of all. Also built of earth mixed
with gravel, it is, however, devoid of any
stone coat or skirt, having instead a row of
sandstone blocks surrounding it on ground
level. The outside diameter ranges from 9 to
20 m, with a height not exceeding 0.70 m.
To verify the preliminary classification
of tumuli types, three different structures
were chosen for excavation. It should be
noted that all the burials appeared to be
plundered, the characteristic depressions in
the top of the second and third kinds of
tumuli being evident signs of robbing.

Tumulus 2 lies in the southeastern part of
the cemetery, surrounded by another four
of the large tumuli (nos. 1, 3, 4 and 5) con-
stituting our first type. Together, they ap-
pear to form a separate group in the ceme-
tery [cf. Fig. I].
The tumulus was about 24 m in dia-
meter with an estimated original height of
not less than 6 m; however, the actual pre-
served height is no more than 2 m at the
highest point above the surrounding ground
level. The superstructure is heavily dis-
turbed with most of the top having disap-
peared, by way of yielding ready building
material rather than actual grave plunder-
ing. This kind of destruction is fairly com-
mon today and does not mean that the sub-
structure was penetrated.
A test pit 6 x 6 m was dug in the top
center of the superstructure, reaching the
original filling of the burial shaft at a depth
of between 0.70 and 1.00 m below the
surface. The shaft was a rough rectangle
(4.50 x 4.40 x 3.50 x 2.40 m, narrowing
toward the bottom) aligned N-S, with a sub-
stantial buttress-like projection of earth ex-
tending from the middle of the east wall
about 1.50m into the shaft and dividing it
into two halves [Fig. 2], Its real function -

for it was certainly no buttress — remains
obscure. The filling, which consisted of
crushed white sandstone, appeared to be
intact except for a pit not exceeding 1 m in
diameter, located in the southwestern cor-
ner. It may be witness to an aborted robbing
attempt. The shaft proved to be about
2.50 m deep. A step was left in the north-
eastern corner about 1.30 m below the
natural surface level, allowing easy descent
to the bottom. Another small step, about
0.30 m high, existed at the base of the
earth pier on the other side, in the south-
western corner.
Opening off this shaft were three
chambers. The southern chamber was sealed
with a solid wall of unbonded mud bricks
[Fig. 3}, about 3-03 m long and 0.50 m
wide, built to a height of about 0.75 m. The
size of the bricks averaged 37-50 x 22-25 x
9-12 cm. Evidence of breaking in was noted
immediately in relation to the above-
described pit observed in the shaft filling.
The second chamber on the west side of the
shaft appeared to have an intact blockage,
which was 2.00 m long and was partly
inserted into the chamber's entrance, the
height ranging between 0.55 and 0.65 m.
The third blockage, in the northwestern