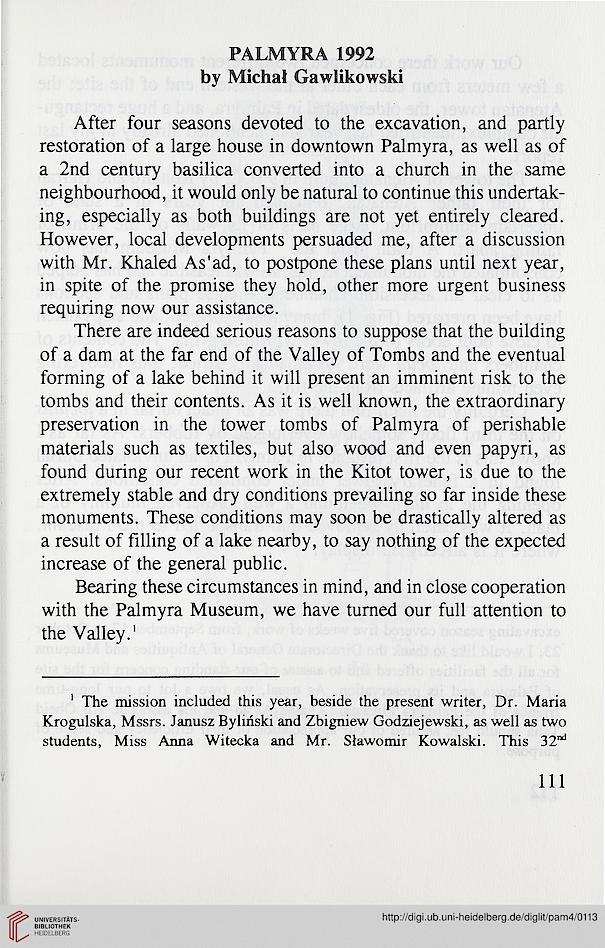 After four seasons devoted to the excavation, and partly
restoration of a large house in downtown Palmyra, as well as of
a 2nd century basilica converted into a church in the same
neighbourhood, it would only be natural to continue this undertak-
ing, especially as both buildings are not yet entirely cleared.
However, local developments persuaded me, after a discussion
with Mr. Khaled As'ad, to postpone these plans until next year,
in spite of the promise they hold, other more urgent business
requiring now our assistance.
There are indeed serious reasons to suppose that the building
of a dam at the far end of the Valley of Tombs and the eventual
forming of a lake behind it will present an imminent risk to the
tombs and their contents. As it is well known, the extraordinary
preservation in the tower tombs of Palmyra of perishable
materials such as textiles, but also wood and even papyri, as
found during our recent work in the Kitot tower, is due to the
extremely stable and dry conditions prevailing so far inside these
monuments. These conditions may soon be drastically altered as
a result of filling of a lake nearby, to say nothing of the expected
increase of the general public.
Bearing these circumstances in mind, and in close cooperation
with the Palmyra Museum, we have turned our full attention to
the Valley.'