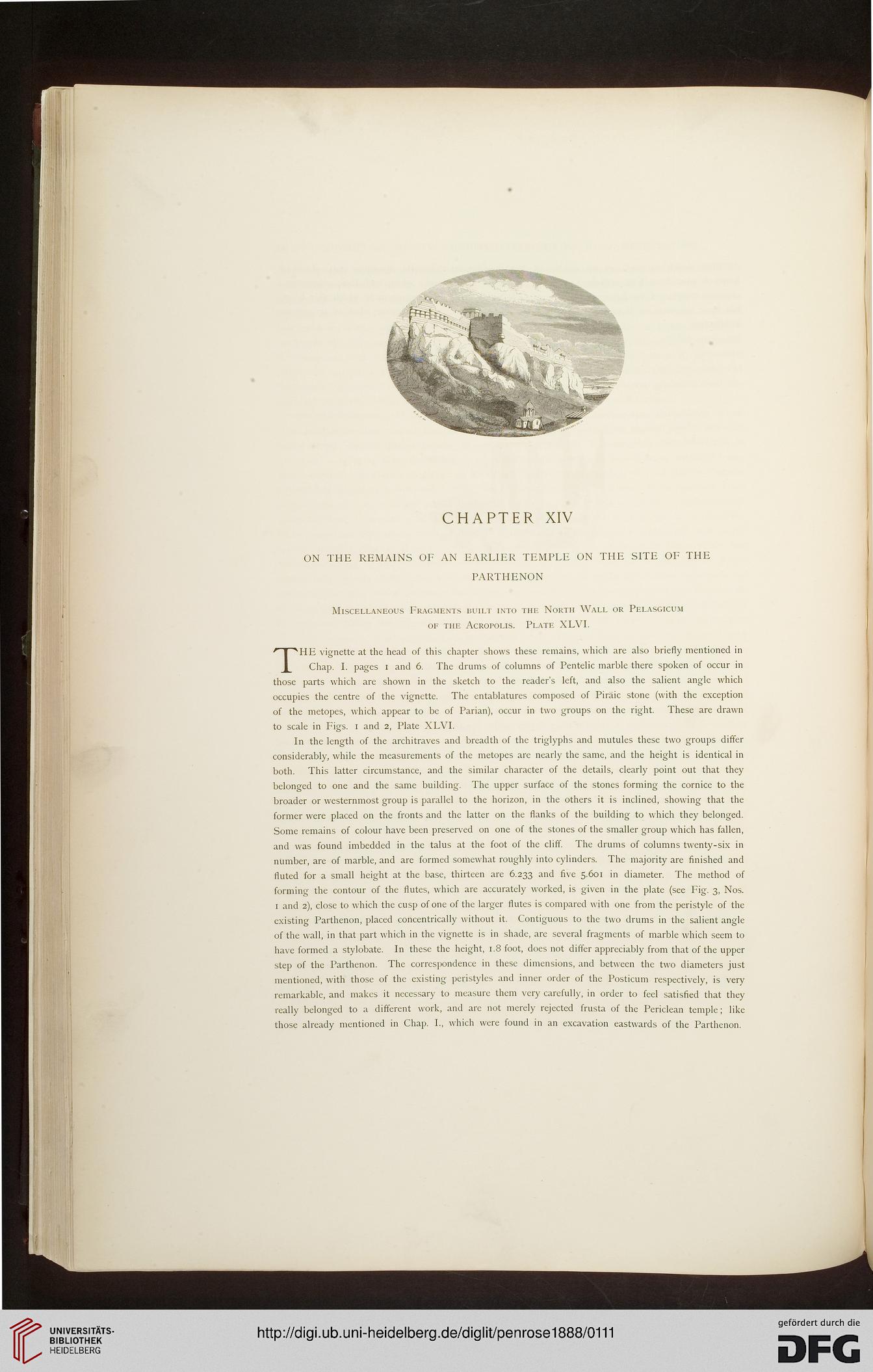 Miscellaneous Fragments built into the North Wall or Pelasgicum
of the Acropolis. Plate XLVI.

THE vignette at the head of this chapter shows these remains, which are also briefly mentioned in
Chap. I. pages I and 6. The drums of columns of Pentelic marble there spoken of occur in
those parts which arc shown in the sketch to the reader's left, and also the salient angle which
occupies the centre of the vignette. The entablatures composed of Piraic stone (with the exception
of the metopes, which appear to be of Parian), occur in two groups on the right. These are drawn
to scale in Figs, i and 2, Plate XLVI.

In the length of the architraves and breadth of the triglyphs and mutules these two groups differ
considerably, while the measurements of the metopes are nearly the same, and the height is identical in
both. This latter circumstance, and the similar character of the details, clearly point out that they
belonged to one and the same building. The upper surface of the stones forming the cornice to the
broader or westernmost group is parallel to the horizon, in the others it is inclined, showing that the
former were placed on the fronts and the latter on the flanks of the building to which they belonged.
Some remains of colour have been preserved on one of the stones of the smaller group which has fallen,
and was found imbedded in the talus at the foot of the cliff. The drums of columns twenty-six in
number, are of marble, and are formed somewhat roughly into cylinders. The majority are finished and
fluted for a small height at the base, thirteen are 6.233 and five 5.601 in diameter. The method of
forming the contour of the flutes, which are accurately worked, is given in the plate (see Fig. 3, Nos.
1 and 2), close to which the cusp of one of the larger flutes is compared with one from the peristyle of the
existing Parthenon, placed concentrically without it. Contiguous to the two drums in the salient angle
of the wall, in that part which in the vignette is in shade, are several fragments of marble which seem to
have formed a stylobate. In these the height, 1.8 foot, does not differ appreciably from that of the upper
step of the Parthenon. The correspondence in these dimensions, and between the two diameters just
mentioned, with those of the existing peristyles and inner order of the Posticum respectively, is very
remarkable, and makes it necessary to measure them very carefully, in order to feel satisfied that they
really belonged to a different work, and arc not merely rejected frusta of the Periclean temple; like
those already mentioned in Chap. I., which were found in an excavation eastwards of the Parthenon.