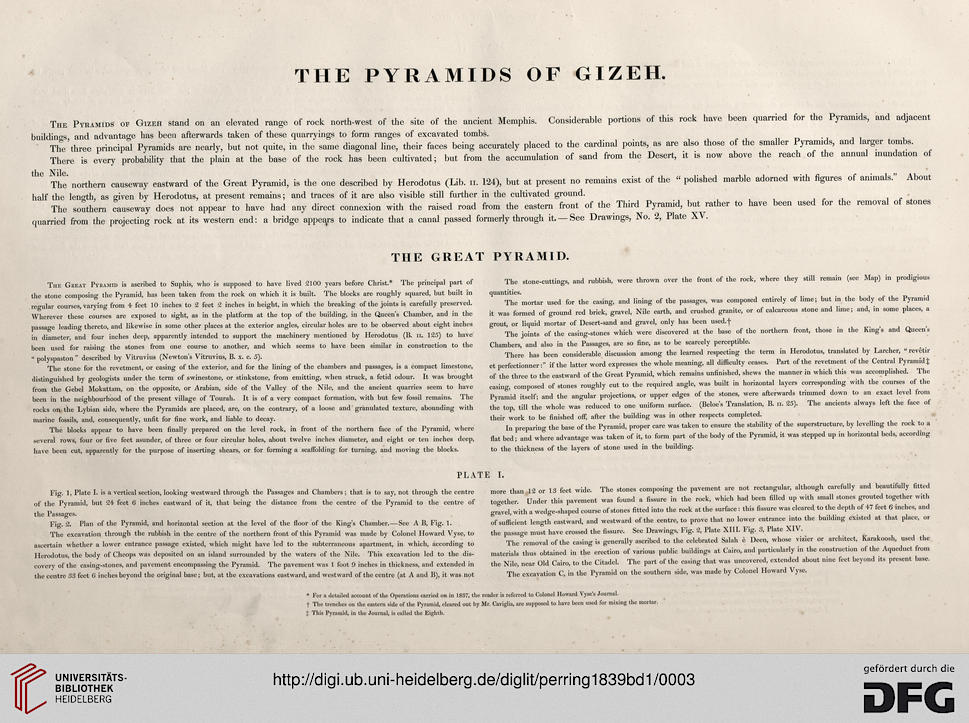 Information about OCR text
THE PYRAMIDS OF GIZEH

The Pyramids of Gizeh stand on an elevated range of rock north-west of the site of the ancient Memphis. Considerable portions of this rock have been quarried for the Pyramids, and adjacent
buildings, and advantage has been afterwards taken of these quarryings to form ranges of excavated tombs.

The three principal Pyramids are nearly, but not quite, in the same diagonal line, their faces being accurately placed to the cardinal points, as are also those of the smaller Pyramids, and larger tombs.

There is every probability that the plain at the base of the rock has been cultivated; but from the accumulation of sand from the Desert, it is now above the reach of the annual inundation of
the Nile.

The northern causeway eastward of the Great Pyramid, is the one described by Herodotus (Lib. n. 124), but at present no remains exist of the " polished marble adorned with figures of animals." About
half the length, as given by Herodotus, at present remains; and traces of it are also visible still further in the cultivated ground.

The southern causeway does not appear to have had any direct connexion with the raised road from the eastern front of the Third Pyramid, but rather to have been used for the removal of stones
quarried from the projecting rock at its western end: a bridge appears to indicate that a canal passed formerly through it. — See Drawings, No. 2, Plate XV.

The Great Pyramid is ascribed to Suphis, who is supposed to have lived 2100 years before Christ.* The principal part of
the stone composing the Pyramid, has been taken from the rock on which it is built. The blocks are roughly squared, but built in
regular courses, varying from 4 feet 10 inches to 2 feet 2 inches in height, in which the breaking of the joints is carefully preserved.
Wherever these courses are exposed to sight, as in the platform at the top of the building, in the Queen's Chamber, and in the
passage leading thereto, and likewise in some other places at the exterior angles, circular holes are to be observed about eight inches
in diameter, and four inches deep, apparently intended to support the machinery mentioned by Herodotus (B. n. 125) to have
been used for raising the stones from one course to another, and which seems to have been similar in construction to the
" polyspaston " described by Vitruvius (Newton's Vitruvius, B. x. c. 5).

The stone for the revetment, or casing of the exterior, and for the lining of the chambers and passages, is a compact limestone,
distinguished by geologists under the term of swinestone, or stinkstone, from emitting, when struck, a fetid odour. It was brought
from the Gebel Mokattam, on the opposite, or Arabian, side of the Valley of the Nile, and the ancient quarries seem to have
been in the neighbourhood of the present village of Tourah. It is of a very compact formation, with but few fossil remains. The
rocks on the Lybian side, where the Pyramids are placed, are, on the contrary, of a loose and granulated texture, abounding with
marine fossils, and, consequently, unfit for fine work, and liable to decay.

The blocks appear to have been finally prepared on the level rock, in front of the northern face of the Pyramid, where
several rows, four or five feet asunder, of three or four circular holes, about twelve inches diameter, and eight or ten inches deep,
have been cut, apparently for the purpose of inserting shears, or for forming a scaffolding for turning, and moving the blocks.

The stone-cuttings, and rubbish, were thrown over the front of the rock, where they still remain (see Map) in prodigious
quantities.

The mortar used for the casing, and lining of the passages, was composed entirely of lime; but in the body of the Pyramid
it was formed of ground red brick, gravel, Nile earth, and crushed granite, or of calcareous stone and lime; and, in some places, a
grout, or liquid mortar of Desert-sand and gravel, only has been used.f

The joints of the casing-stones which were discovered at the base of the northern front, those in the King's and Queen's
Chambers, and also in the Passages, are so fine, as to be scarcely perceptible.

There has been considerable discussion among the learned respecting the term in Herodotus, translated by Larcher, " revetir
et perfectionner:" if the latter word expresses the whole meaning, all difficulty ceases. Part of the revetment of the Central Pyramid J
of the three to the eastward of the Great Pyramid, which remains unfinished, shews the manner in which this was accomplished. The
casing, composed of stones roughly cut to the required angle, was built in horizontal layers corresponding with the courses of the
Pyramid itself; and the angular projections, or upper edges of the stones, were afterwards trimmed down to an exact level from
the top, till the whole was reduced to one uniform surface. (Beloe's Translation, B. n. 25). The ancients always left the face of
their work to be finished off, after the building was in other respects completed.

In preparing the base of the Pyramid, proper care was taken to ensure the stability of the superstructure, by levelling the rock to a
flat bed; and where advantage was taken of it, to form part of the body of the Pyramid, it was stepped up in horizontal beds, according
to the thickness of the layers of stone used in the building.

Fig. 2. Plan of the Pyramid, and horizontal section at the level of the floor of the King's Chamber.—See A B, Fig. 1.

The excavation through the rubbish in the centre of the northern front of this Pyramid was made by Colonel Howard Vyse, to
ascertain whether a lower entrance passage existed, which might have led to the subterraneous apartment, in which, according to
Herodotus, the body of Cheops was deposited on an island surrounded by the waters of the Nile. This excavation led to the dis-
covery of the casing-stones, and pavement encompassing the Pyramid. The pavement was 1 foot 9 inches in thickness, and extended in
the centre 33 feet 6 inches beyond the original base; but, at the excavations eastward, and westward of the centre (at A and B), it was not

more than 12 or \3 feet wide. The stones composing the pavement are not rectangular, although carefully and beautifully fitted
together. Under this pavement was found a fissure in the rock, which had been filled up with small stones grouted together with
gravel, with a wedge-shaped course of stones fitted into the rock at the surface : this fissure was cleared to the depth of 47 feet 6 inches, and
of sufficient length eastward, and westward of the centre, to prove that no lower entrance into the building existed at that place, or
the passage must have crossed the fissure. See Drawings, Fig. 2, Plate XIII. Fig. 3, Plate XIV.

The removal of the casing is generally ascribed to the celebrated Salah e Deen, whose vizier or architect, Karakoosh, used the
materials thus obtained in the erection of various public buildings at Cairo, and particularly in the construction of the Aqueduct from
the Nile, near Old Cairo, to the Citadel. The part of the casing that was uncovered, extended about nine feet beyond its present base.

The excavation C, in the Pyramid on the southern side, was made by Colonel Howard Vyse.

* For a detailed account of the Operations carried on in 1837, the reader is referred to Colonel Howard Vyse's Journal.

| The trenches on the eastern side of the Pyramid, cleared out by Mr. Caviglia, are supposed to have been used for mixing the mortar.

% This Pyramid, in the Journal, is called the Eighth.