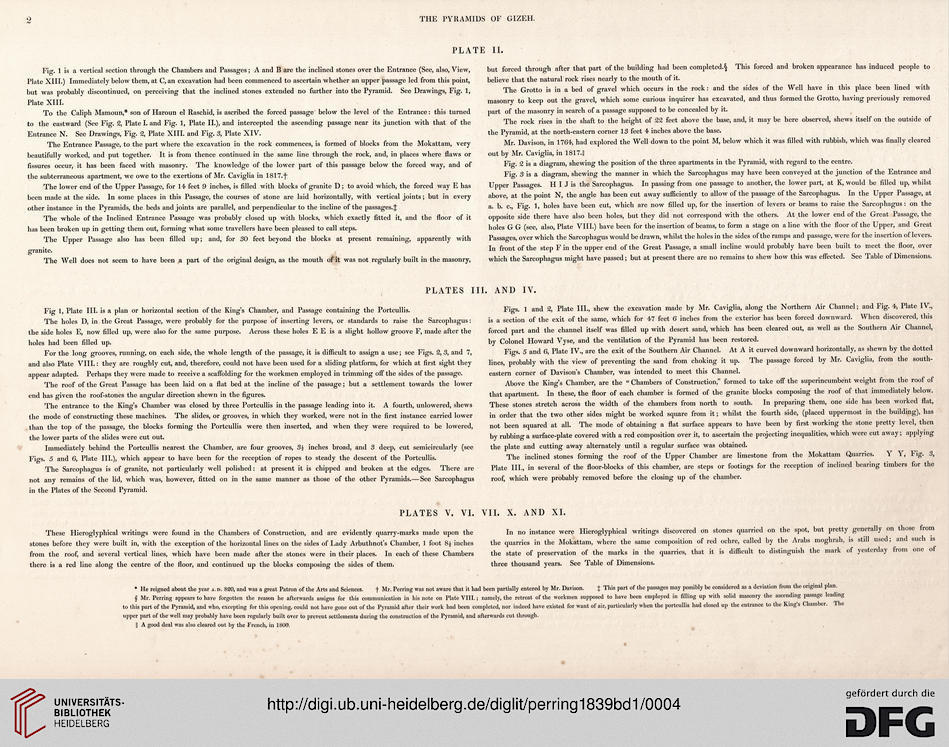 THE PYRAMIDS OF GIZEH.

Fig. 1 is a vertical section through the Chambers and Passages; A and B are the inclined stones over the Entrance (See, also, View,
Plate XIII.) Immediately below them, at C, an excavation had been commenced to ascertain whether an upper passage led from this point,
but was probably discontinued, on perceiving that the inclined stones extended no further into the Pyramid. See Drawings, Fig. 1,
PlateXIII.

To the Caliph Mamoun,* son of Haroun el Raschid, is ascribed the forced passage below the level of the Entrance: this turned
to the eastward (See Fig. 2, Plate I. and Fig. 1, Plate II.), and intercepted the ascending passage near its junction with that of the
Entrance N. See Drawings, Fig. 2, Plate XIII. and Fig. 3, Plate XIV.

The Entrance Passage, to the part where the excavation in the rock commences, is formed of blocks from the Mokattam, very
beautifully worked, and put together. It is from thence continued in the same line through the rock, and, in places where flaws or
fissures occur, it has been faced with masonry. The knowledge of the lower part of this passage below the forced way, and of
the subterraneous apartment, we owe to the exertions of Mr. Caviglia in 1817. f

The lower end of the Upper Passage, for 14 feet 9 inches, is filled with blocks of granite D; to avoid which, the forced way E has
been made at the side. In some places in this Passage, the courses of stone are laid horizontally, with vertical joints; but in every
other instance in the Pyramids, the beds and joints are parallel, and perpendicular to the incline of the passages. J

The whole of the Inclined Entrance Passage was probably closed up with blocks, which exactly fitted it, and the floor of it
has been broken up in getting them out, forming what some travellers have been pleased to call steps.

The Upper Passage also has been filled up; and, for 30 feet beyond the blocks at present remaining, apparently with
granite.

The Well does not seem to have been a part of the original design, as the mouth of it was not regularly built in the masonry,

but forced through after that part of the building had been completed.§ This forced and broken appearance has induced people to
believe that the natural rock rises nearly to the mouth of it.

The Grotto is in a bed of gravel which occurs in the rock: and the sides of the Well have in this place been lined with
masonry to keep out the gravel, which some curious inquirer has excavated, and thus formed the Grotto, having previously removed
part of the masonry in search of a passage supposed to be concealed by it.

The rock rises in the shaft to the height of 22 feet above the base, and, it may be here observed, shews itself on the outside of
the Pyramid, at the north-eastern corner 13 feet 4 inches above the base.

Mr. Davison, in 1764, had explored the Well down to the point M, below which it was filled with rubbish, which was finally cleared
out by Mr. Caviglia, in 1817.1

Fig. 2 is a diagram, shewing the position of the three apartments in the Pyramid, with regard to the centre.

Fig. 3 is a diagram, shewing the manner in which the Sarcophagus may have been conveyed at the junction of the Entrance and
Upper Passages. H I J is the Sarcophagus. In passing from one passage to another, the lower part, at K, would be filled up, whilst
above, at the point N, the angle has been cut away sufficiently to allow of the passage of the Sarcophagus. In the Upper Passage, at
a. b. c, Fig. 1, holes have been cut, which are now filled up, for the insertion of levers or beams to raise the Sarcophagus : on the
opposite side there have also been holes, but they did not correspond with the others. At the lower end of the Great Passage, the
holes GG (see, also, Plate VIII.) have been for the insertion of beams, to form a stage on aline with the floor of the Upper, and Great
Passages, over which the Sarcophagus would be drawn, whilst the holes in the sides of the ramps and passage, were for the insertion of levers.
In front of the step F in the upper end of the Great Passage, a small incline would probably have been built to meet the floor, over
which the Sarcophagus might have passed; but at present there are no remains to shew how this was effected. See Table of Dimensions.

Fig 1, Plate III. is a plan or horizontal section of the King's Chamber, and Passage containing the Portcullis.

The holes D, in the Great Passage, were probably for the purpose of inserting levers, or standards to raise the Sarcophagus:
the side holes E, now filled up, were also for the same purpose. Across these holes E E is a slight hollow groove F, made after the
holes had been filled up.

For the long grooves, running, on each side, the whole length of the passage, it is difficult to assign a use; see Figs. 2, 3, and 7,
and also Plate VIII.: they are roughly cut, and, therefore, could not have been used for a sliding platform, for which at first sight they
appear adapted. Perhaps they were made to receive a scaffolding for the workmen employed in trimming off the sides of the passage.

The roof of the Great Passage has been laid on a flat bed at the incline of the passage; but a settlement towards the lower
end has given the roof-stones the angular direction shewn in the figures.

The entrance to the King's Chamber was closed by three Portcullis in the passage leading into it. A fourth, unlowered, shews
the mode of constructing these machines. The slides, or grooves, in which they worked, were not in the first instance carried lower
than the top of the passage, the blocks forming the Portcullis were then inserted, and when they were required to be lowered,
the lower parts of the slides were cut out.

Immediately behind the Portcullis nearest the Chamber, are four grooves, 3\ inches broad, and 3 deep, cut semicircularly (see
Figs. 5 and 6, Plate III.), which appear to have been for the reception of ropes to steady the descent of the Portcullis.

The Sarcophagus is of granite, not particularly well polished: at present it is chipped and broken at the edges. There are
not any remains of the lid, which was, however, fitted on in the same manner as those of the other Pyramids.—See Sarcophagus
in the Plates of the Second Pyramid.

Figs. 1 and 2, Plate III., shew the excavation made by Mr. Caviglia, along the Northern Air Channel; and Fig. 4, Plate IV.,
is a section of the exit of the same, which for 47 feet 6 inches from the exterior has been forced downward. When discovered, this
forced part and the channel itself was filled up with desert sand, which has been cleared out, as well as the Southern Air Channel,
by Colonel Howard Vyse, and the ventilation of the Pyramid has been restored.

Figs. 5 and 6, Plate IV., are the exit of the Southern Air Channel. At A it curved downward horizontally, as shewn by the dotted
lines, probably with the view of preventing the sand from choking it up. The passage forced by Mr. Caviglia, from the south-
eastern corner of Davison's Chamber, was intended to meet this Channel.

Above the King's Chamber, are the " Chambers of Construction," formed to take off the superincumbent weight from the roof of
that apartment. In these, the floor of each chamber is formed of the granite blocks composing the roof of that immediately below.
These stones stretch across the width of the chambers from north to south. In preparing them, one side has been worked flat,
in order that the two other sides might be worked square from it; whilst the fourth side, (placed uppermost in the building), has
not been squared at all. The mode of obtaining a flat surface appears to have been by first working the stone pretty level, then
by rubbing a surface-plate covered with a red composition over it, to ascertain the projecting inequalities, which were cut away; applying
the plate and cutting away alternately until a regular surface was obtained.

The inclined stones forming the roof of the Upper Chamber are limestone from the Mokattam Quarries. Y Y, Fig. 3,
Plate III., in several of the floor-blocks of this chamber, are steps or footings for the reception of inclined bearing timbers for the
roof, which were probably removed before the closing up of the chamber.

These Hieroglyphical writings were found in the Chambers of Construction, and are evidently quarry-marks made upon the
stones before they were built in, with the exception of the horizontal lines on the sides of Lady Arbuthnot's Chamber, 1 foot 8£ inches
from the roof, and several vertical lines, which have been made after the stones were in their places. In each of these Chambers
there is a red line along the centre of the floor, and continued up the blocks composing the sides of them.

In no instance were Hieroglyphical writings discovered on stones quarried on the spot, but pretty generally on those from
the quarries in the Mokattam, where the same composition of red ochre, called by the Arabs moghrah, is still used; and such is
the state of preservation of the marks in the quarries, that it is difficult to distinguish the mark of yesterday from one of
three thousand years. See Table of Dimensions.

* He reigned about the year a.d. 820, and was a great Patron of the Arts and Sciences. f Mr. Perring was not aware that it had been partially entered by Mr. Davison. J This part of the passages may possibly be considered as a deviation from the original plan.

§ Mr. Perring appears to have forgotten the reason he afterwards assigns for this communication in his note on Plate VIII.; namely, the retreat of the workmen supposed to have been employed in filling up with solid masonry the ascending passage leading
to this part of the Pyramid, and who, excepting for this opening, could not have gone out of the Pyramid after their work had been completed, nor indeed have existed for want of air, particularly when the portcullis had closed up the entrance to the King's Chamber. The
upper part of the well may probably have been regularly built over to prevent settlements during the construction of the Pyramid, and afterwards cut through.