Perring, John Shae ; Andrews, E. J. [Editor]
The pyramids of Gizeh: from actual survey and admeasurement (Band 3): The pyramids to the southward of Gizeh and at Abou Roash... — London, 1842 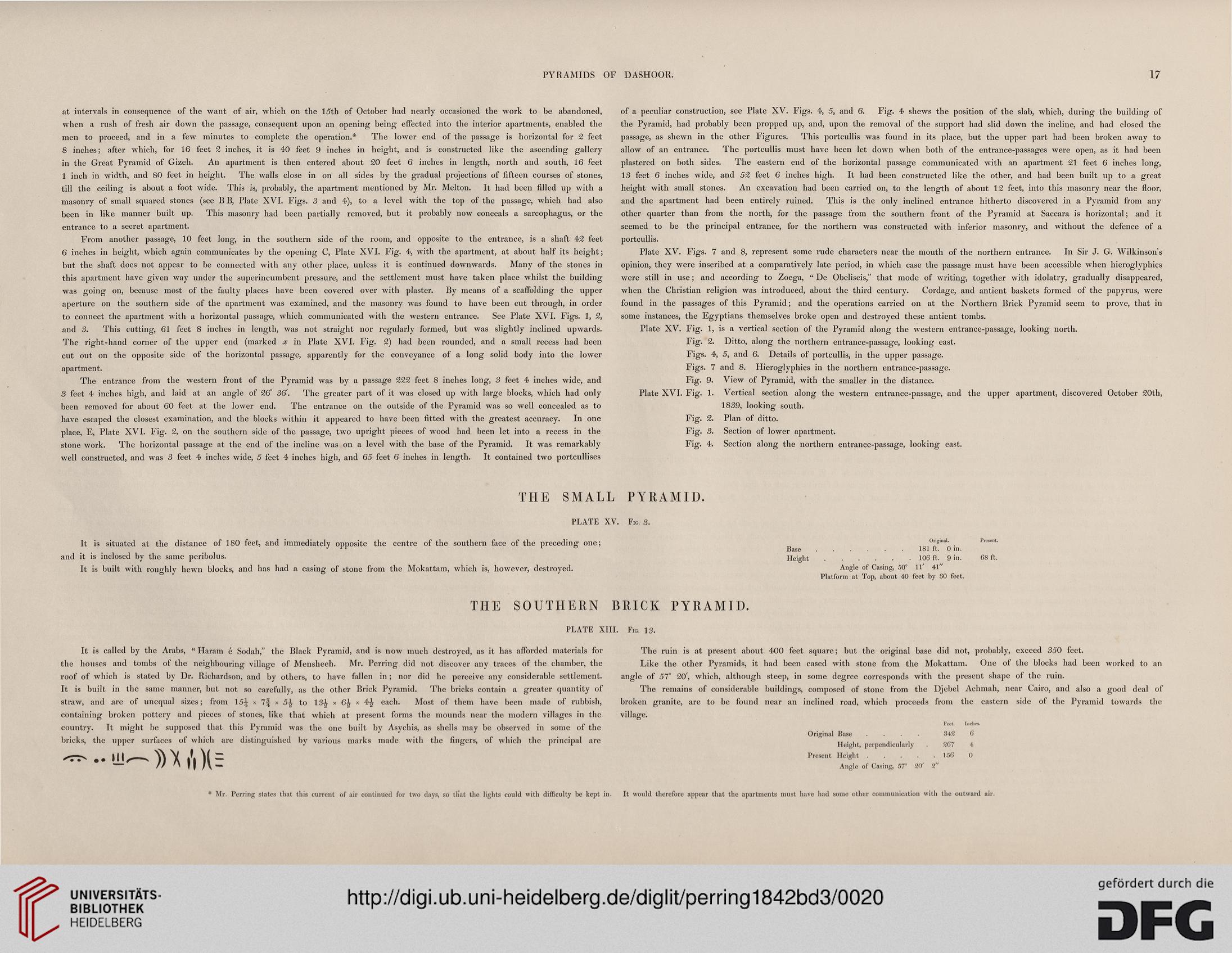 at intervals in consequence of the want of air, which on the 15th of October had nearly occasioned the work to be abandoned,
when a rush of fresh air down the passage, consequent upon an opening being effected into the interior apartments, enabled the
men to proceed, and in a few minutes to complete the operation.* The lower end of the passage is horizontal for 2 feet
8 inches; after which, for 16 feet 2 inches, it is 40 feet 9 inches in height, and is constructed like the ascending gallery
in the Great Pyramid of Gizeh. An apartment is then entered about 20 feet 6 inches in length, north and south, 16 feet
1 inch in width, and 80 feet in height. The walls close in on all sides by the gradual projections of fifteen courses of stones,
till the ceiling is about a foot wide. This is, probably, the apartment mentioned by Mr. Melton. It had been filled up with a
masonry of small squared stones (see B B, Plate XVI. Figs. 3 and 4), to a level with the top of the passage, which had also
been in like manner built up. This masonry had been partially removed, but it probably now conceals a sarcophagus, or the
entrance to a secret apartment.

From another passage, 10 feet long, in the southern side of the room, and opposite to the entrance, is a shaft 42 feet
6 inches in height, which again communicates by the opening C, Plate XVI. Fig. 4, with the apartment, at about half its height;
but the shaft does not appear to be connected with any other place, unless it is continued downwards. Many of the stones in
this apartment have given way under the superincumbent pressure, and the settlement must have taken place whilst the building
was going on, because most of the faulty places have been covered over with plaster. By means of a scaffolding the upper
aperture on the southern side of the apartment was examined, and the masonry was found to have been cut through, in order
to connect the apartment with a horizontal passage, which communicated with the western entrance. See Plate XVI. Figs. 1, 2,
and 3. This cutting, 61 feet 8 inches in length, was not straight nor regularly formed, but was slightly inclined upwards.
The right-hand corner of the upper end (marked oc in Plate XVI. Fig. 2) had been rounded, and a small recess had been
cut out on the opposite side of the horizontal passage, apparently for the conveyance of a long solid body into the lower
apartment.

The entrance from the western front of the Pyramid was by a passage 222 feet 8 inches long, 3 feet 4 inches wide, and
3 feet 4 inches high, and laid at an angle of 26° 36'. The greater part of it was closed up with large blocks, which had only
been removed for about 60 feet at the lower end. The entrance on the outside of the Pyramid was so well concealed as to
have escaped the closest examination, and the blocks within it appeared to have been fitted with the greatest accuracy. In one
place, E, Plate XVI. Fig. 2, on the southern side of the passage, two upright pieces of wood had been let into a recess in the
stone work. The horizontal passage at the end of the incline was on a level with the base of the Pyramid. It was remarkably
well constructed, and was 3 feet 4 inches wide, 5 feet 4 inches high, and 65 feet 6 inches in length. It contained two portcullises

of a peculiar construction, see Plate XV. Figs. 4, 5, and 6. Fig. 4 shews the position of the slab, which, during the building of
the Pyramid, had probably been propped up, and, upon the removal of the support had slid down the incline, and had closed the
passage, as shewn in the other Figures. This portcullis was found in its place, but the upper part had been broken away to
allow of an entrance. The portcullis must have been let down when both of the entrance-passages were open, as it had been
plastered on both sides. The eastern end of the horizontal passage communicated with an apartment 21 feet 6 inches long,
13 feet 6 inches wide, and 52 feet 6 inches high. It had been constructed like the other, and had been built up to a great
height with small stones. An excavation had been carried on, to the length of about 12 feet, into this masonry near the floor,
and the apartment had been entirely ruined. This is the only inclined entrance hitherto discovered in a Pyramid from any
other quarter than from the north, for the passage from the southern front of the Pyramid at Saccara is horizontal; and it
seemed to be the principal entrance, for the northern was constructed with inferior masonry, and without the defence of a
portcullis.

Plate XV. Figs. 7 and 8, represent some rude characters near the mouth of the northern entrance. In Sir J. G. Wilkinson's
opinion, they were inscribed at a comparatively late period, in which case the passage must have been accessible when hieroglyphics
were still in use; and according to Zoega, " De Obeliscis," that mode of writing, together with idolatry, gradually disappeared,
when the Christian religion was introduced, about the third century. Cordage, and antient baskets formed of the papyrus, were
found in the passages of this Pyramid; and the operations carried on at the Northern Brick Pyramid seem to prove, that in
some instances, the Egyptians themselves broke open and destroyed these antient tombs.

Plate XV. Fig. 1, is a vertical section of the Pyramid along the western entrance-passage, looking north.

Figs. 7 and 8. Hieroglyphics in the northern entrance-passage.
View of Pyramid, with the smaller in the distance.

It is situated at the distance of 180 feet, and immediately opposite the centre of the southern face of the preceding one;
and it is inclosed by the same peribolus.

It is built with roughly hewn blocks, and has had a casing of stone from the Mokattam, which is, however, destroyed.

It is called by the Arabs, " Haram e Sodah," the Black Pyramid, and is now much destroyed, as it has afforded materials for
the houses and tombs of the neighbouring village of Mensheeh. Mr. Perring did not discover any traces of the chamber, the
roof of which is stated by Dr. Richardson, and by others, to have fallen in; nor did he perceive any considerable settlement.
It is built in the same manner, but not so carefully, as the other Brick Pyramid. The bricks contain a greater quantity of
straw, and are of unequal sizes; from 15\ x 7f x 5J to 13-J x 6j x 4J each. Most of them have been made of rubbish,
containing broken pottery and pieces of stones, like that which at present forms the mounds near the modern villages in the
country. It might be supposed that this Pyramid was the one built by Asychis, as shells may be observed in some of the
bricks, the upper surfaces of which are distinguished by various marks made with the fingers, of which the principal are

The ruin is at present about 400 feet square; but the original base did not, probably, exceed 350 feet.

Like the other Pyramids, it had been cased with stone from the Mokattam. One of the blocks had been worked to an
angle of 57° £0', which, although steep, in some degree corresponds with the present shape of the ruin.

The remains of considerable buildings, composed of stone from the Djebel Achmah, near Cairo, and also a good deal of
broken granite, are to be found near an inclined road, which proceeds from the eastern side of the Pyramid towards the
village.

* Mr. Perring states that this current of air continued for two days, so that the lights could with difficulty be kept in. It would therefore appear that the apartments must have had some other communication with the outward air.