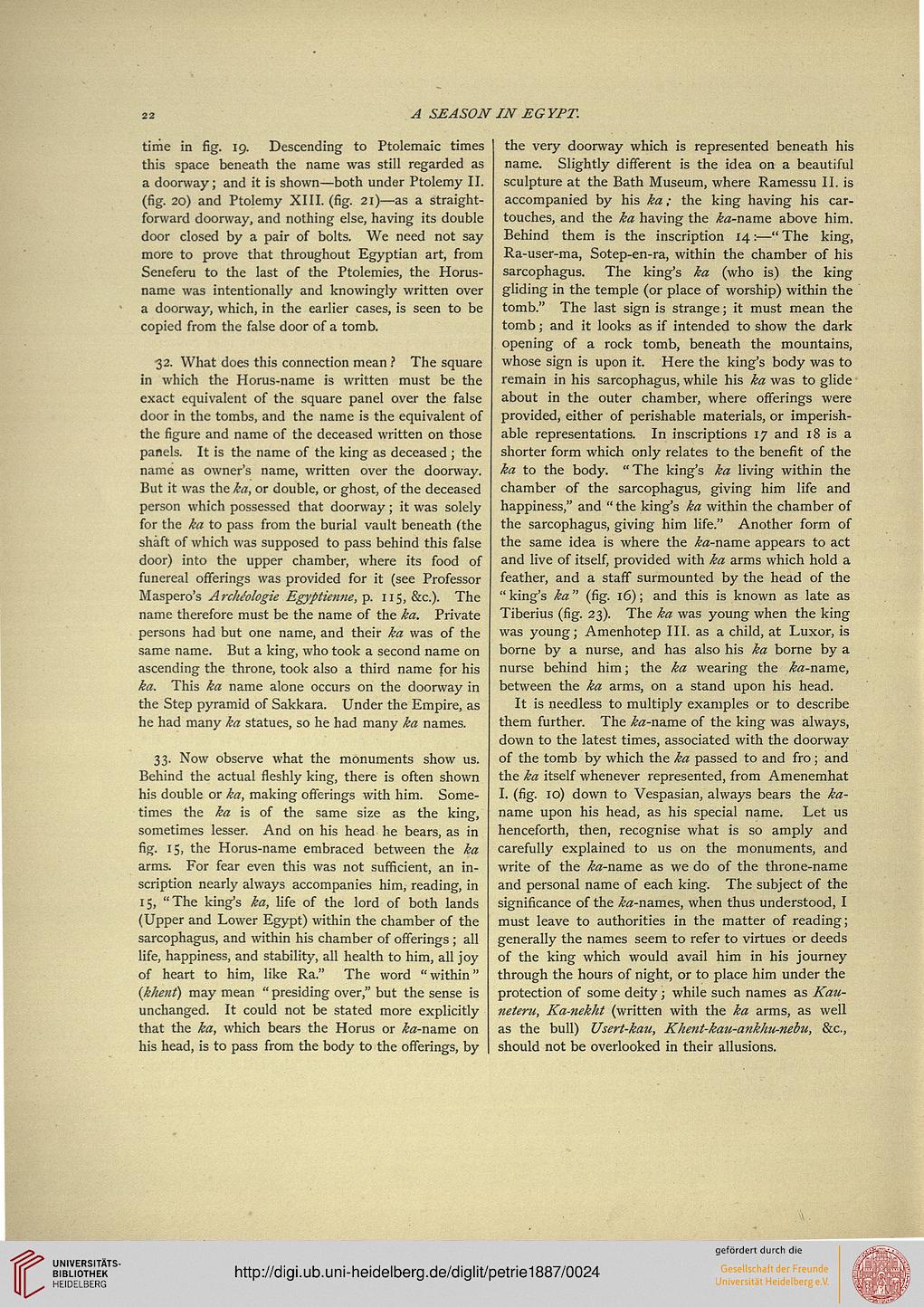 time in fig. 19. Descending to Ptolemaic times
this space beneath the name was still regarded as
a doorway; and it is shown—both under Ptolemy II.
(fig. 20) and Ptolemy XIII. (fig. 21)—as a straight-
forward doorway, and nothing else, having its double
door closed by a pair of bolts. We need not say
more to prove that throughout Egyptian art, from
Seneferu to the last of the Ptolemies, the Horus-
name was intentionally and knowingly written over
a doorway, which, in the earlier cases, is seen to be
copied from the false door of a tomb.

32. What does this connection mean ? The square
in which the Horus-name is written must be the
exact equivalent of the square panel over the false
door in the tombs, and the name is the equivalent of
the figure and name of the deceased written on those
panels. It is the name of the king as deceased; the
name as owner's name, written over the doorway.
But it was the ka, or double, or ghost, of the deceased
person which possessed that doorway; it was solely
for the ka to pass from the burial vault beneath (the
shaft of which was supposed to pass behind this false
door) into the upper chamber, where its food of
funereal offerings was provided for it (see Professor
Maspero's ArchMogie Egyptienne, p. 115, &c). The
name therefore must be the name of the ka. Private
persons had but one name, and their ka was of the
same name. But a king, who took a second name on
ascending the throne, took also a third name for his
ka. This ka name alone occurs on the doorway in
the Step pyramid of Sakkara. Under the Empire, as
he had many ka statues, so he had many ka names.

33. Now observe what the monuments show us.
Behind the actual fleshly king, there is often shown
his double or ka, making offerings with him. Some-
times the ka is of the same size as the king,
sometimes lesser. And on his head he bears, as in
fig. 15, the Horus-name embraced between the ka
arms. For fear even this was not sufficient, an in-
scription nearly always accompanies him, reading, in
15, "The king's ka, life of the lord of both lands
(Upper and Lower Egypt) within the chamber of the
sarcophagus, and within his chamber of offerings ; all
life, happiness, and stability, all health to him, all joy
of heart to him, like Ra." The word "within"
{khent) may mean " presiding over," but the sense is
unchanged. It could not be stated more explicitly
that the ka, which bears the Horus or £«-name on
his head, is to pass from the body to the offerings, by

the very doorway which is represented beneath his
name. Slightly different is the idea on a beautiful
sculpture at the Bath Museum, where Ramessu II. is
accompanied by his ka; the king having his car-
touches, and the ka having the fe-name above him.
Behind them is the inscription 14:—" The king,
Ra-user-ma, Sotep-en-ra, within the chamber of his
sarcophagus. The king's ka (who is) the king
gliding in the temple (or place of worship) within the
tomb." The last sign is strange; it must mean the
tomb; and it looks as if intended to show the dark
opening of a rock tomb, beneath the mountains,
whose sign is upon it. Here the king's body was to
remain in his sarcophagus, while his ka was to glide
about in the outer chamber, where offerings were
provided, either of perishable materials, or imperish-
able representations. In inscriptions 17 and 18 is a
shorter form which only relates to the benefit of the
ka to the body. "The king's ka living within the
chamber of the sarcophagus, giving him life and
happiness," and " the king's ka within the chamber of
the sarcophagus, giving him life." Another form of
the same idea is where the &-name appears to act
and live of itself, provided with ka arms which hold a
feather, and a staff surmounted by the head of the
"king's ka" (fig. 16); and this is known as late as
Tiberius (fig. 23). The ka was young when the king
was young; Amenhotep III. as a child, at Luxor, is
borne by a nurse, and has also his ka borne by a
nurse behind him; the ka wearing the &-name,
between the ka arms, on a stand upon his head.

It is needless to multiply examples or to describe
them further. The &-name of the king was always,
down to the latest times, associated with the doorway
of the tomb by which the ka passed to and fro; and
the ka itself whenever represented, from Amenemhat
I. (fig. 10) down to Vespasian, always bears the ka-
name upon his head, as his special name. Let us
henceforth, then, recognise what is so amply and
carefully explained to us on the monuments, and
write of the &-name as we do of the throne-name
and personal name of each king. The subject of the
significance of the &z-names, when thus understood, I
must leave to authorities in the matter of reading;
generally the names seem to refer to virtues or deeds
of the king which would avail him in his journey
through the hours of night, or to place him under the
protection of some deity; while such names as Kau-
neteru, Ka-nekht (written with the ka arms, as well
as the bull) Usert-kau, Khent-kau-ankhu-nebu, &c,
should not be overlooked in their allusions.