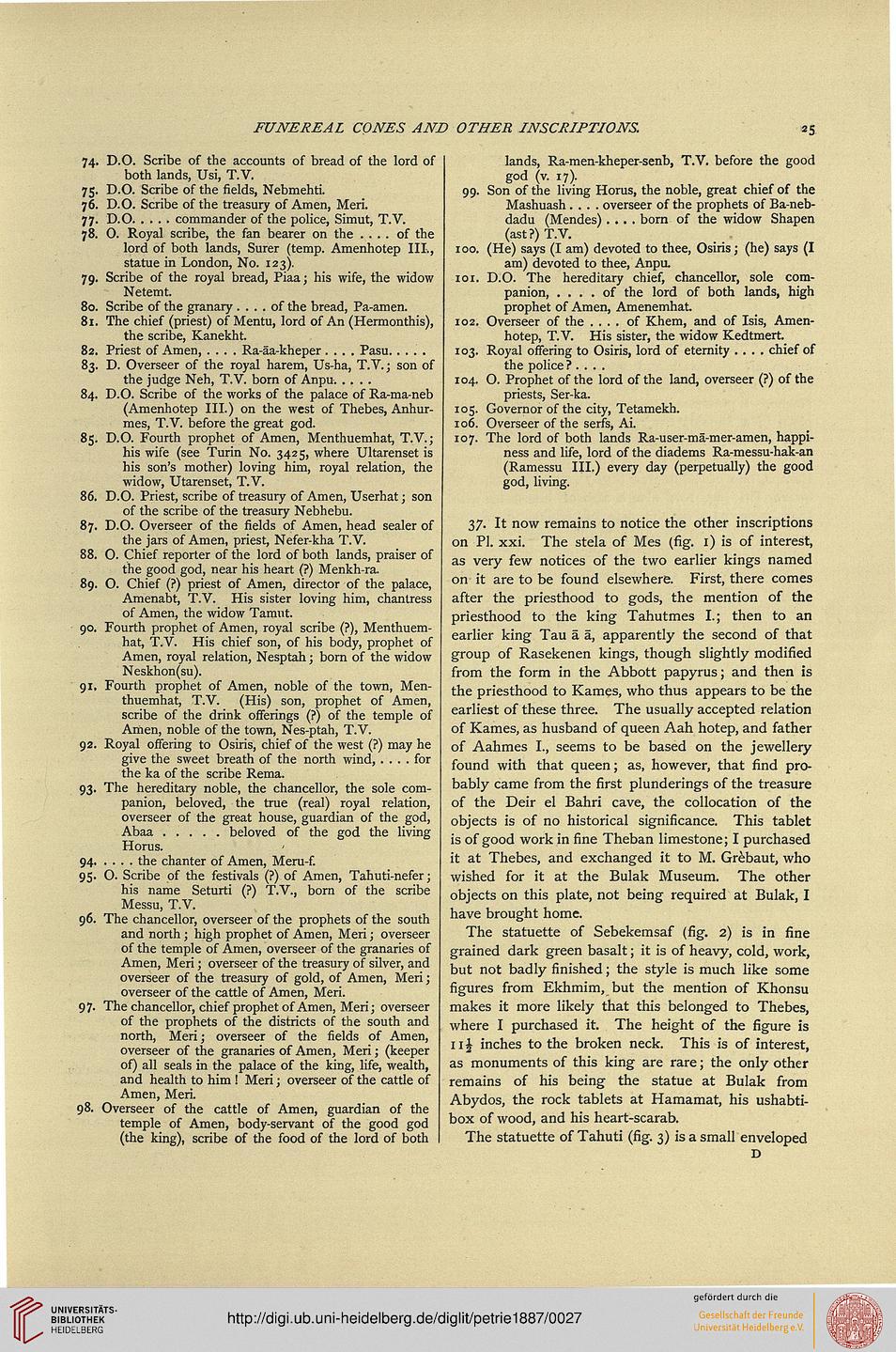 Information about OCR text
FUNEREAL CONES AND OTHER INSCRIPTIONS.

74. D.O. Scribe of the accounts of bread of the lord of

79. Scribe of the royal bread, Piaa; his wife, the widow

(Amenhotep III.) on the west of Thebes, Anhur-
mes, T.V. before the great god.

his wife (see Turin No. 3425, where Ultarenset is
his son's mother) loving him, royal relation, the
widow, Utarenset, T.V.

of the scribe of the treasury Nebhebu.

87. D.O. Overseer of the fields of Amen, head sealer of

88. O. Chief reporter of the lord of both lands, praiser of

Amenabt, T.V. His sister loving him, chantress
of Amen, the widow Tamut.

hat, T.V. His chief son, of his body, prophet of
Amen, royal relation, Nesptah; born of the widow
Neskhon(su).

91. Fourth prophet of Amen, noble of the town, Men-

thuemhat, T.V. (His) son, prophet of Amen,
scribe of the drink offerings (?) of the temple of
Amen, noble of the town, Nes-ptah, T.V.

give the sweet breath of the north wind, .... for
the ka of the scribe Rema.

93. The hereditary noble, the chancellor, the sole com-

panion, beloved, the true (real) royal relation,
overseer of the great house, guardian of the god,

Abaa.....beloved of the god the living

Son of the living Horus, the noble, great chief of the
Mashuash.... overseer of the prophets of Ba-neb-
dadu (Mendes).... born of the widow Shapen
(ast?)T.V.

D.O. The hereditary chief, chancellor, sole com-
panion, .... of the lord of both lands, high
prophet of Amen, Amenemhat.

37. It now remains to notice the other inscriptions
on PI. xxi. The stela of Mes (fig. 1) is of interest,
as very few notices of the two earlier kings named
on it are to be found elsewhere. First, there comes
after the priesthood to gods, the mention of the
priesthood to the king Tahutmes I.; then to an
earlier king Tau a a, apparently the second of that
group of Rasekenen kings, though slightly modified
from the form in the Abbott papyrus; and then is
the priesthood to Karnes, who thus appears to be the
earliest of these three. The usually accepted relation
of Kames, as husband of queen Aah hotep, and father
of Aahmes I., seems to be based on the jewellery
found with that queen; as, however, that find pro-
bably came from the first plunderings of the treasure
of the Deir el Bahri cave, the collocation of the
objects is of no historical significance. This tablet
is of good work in fine Theban limestone; I purchased
it at Thebes, and exchanged it to M. Grebaut, who
wished for it at the Bulak Museum. The other
objects on this plate, not being required at Bulak, I
have brought home.

The statuette of Sebekemsaf (fig. 2) is in fine
grained dark green basalt; it is of heavy, cold, work,
but not badly finished; the style is much like some
figures from Ekhmim, but the mention of Khonsu
makes it more likely that this belonged to Thebes,
where I purchased it. The height of the figure is
ii£ inches to the broken neck. This is of interest,
as monuments of this king are rare; the only other
remains of his being the statue at Bulak from
Abydos, the rock tablets at Hamamat, his ushabti-
box of wood, and his heart-scarab.

The statuette of Tahuti (fig. 3) is a small enveloped